It’s that time of the year again, almost. The transfer window officially opens in July but plans are already well underway for many clubs as they look to bring in reinforcements and upgrades to their current squad. For Liverpool though it’s their chance to yet again visit the South Coast for their annual summer holiday.

Not content with just looking to poach Virgil van Dijk from Southampton, Liverpool transfer rumours suggest the club are also said to be interested in Dušan Tadić. You have to start to wonder whether or not the Saints are sick of the sight of the recruitment team from Anfield or actually welcome their regular custom.

The Reds are like that one set of relatives many people have. The ones who refuse to go abroad and instead prefer to stay closer to home for their summer break. They cite that it’s a tried and tested formula because, well, they know what they’re getting.

Liverpool have raided Southampton for the past three summers and are intent on making it four on the bounce.

Adam Lallana, Dejan Lovren, Rickie Lambert, Nathaniel Clyne and Sadio Mané have all had varying degrees of success at Anfield, but the players must have done enough to convince those in charge on Merseyside that Southampton should once again be plundered.

The van Dijk transfer is still up in the air with Liverpool publicly ending their interest but there's a feeling that, if the Dutch defender forced the issue, it could still happen. Undeterred though, the Reds have turned their attentions to Tadić. 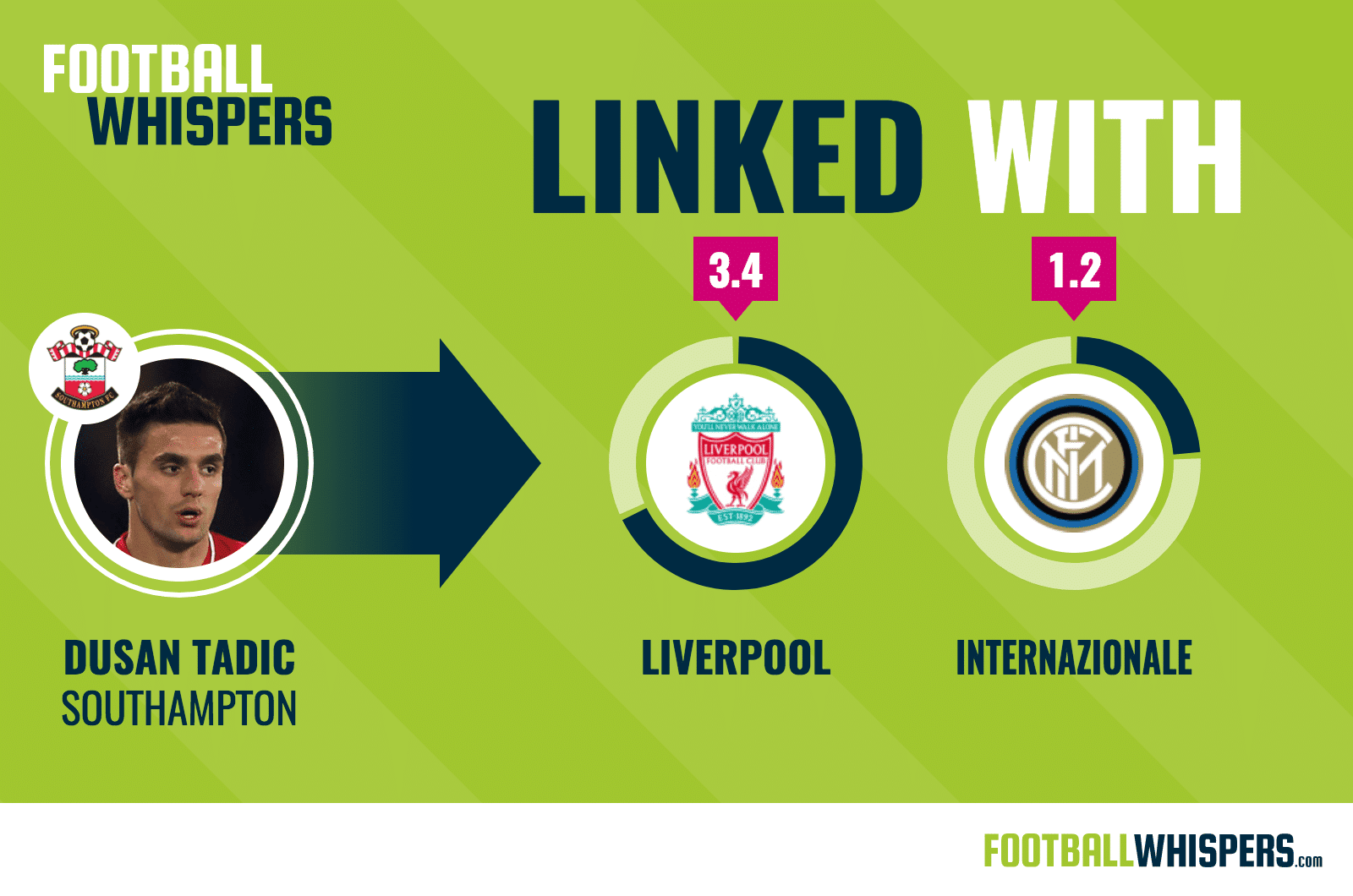 According to recent reports in the Times, Jürgen Klopp is keen to add the 28-year-old to his squad and the £13million release clause in his deal means there should be no complications between the two clubs.

The Liverpool Echo then claimed a source close to the player has said Tadić, who joined the Saints from FC Twente in 2014 for a fee rumoured to be close to £11million, would be open to a move to Anfield.

But does he have the requisite quality to turn out for a team hoping to challenge on all fronts next season? Or is he simply being used in negotiation tactics as Klopp attempts to land his first-choice centre-back?

Is Tadić good enough for Liverpool?

The Reds are often accused of being overly reliant on Philippe Coutinho. The Brazilian, when he turns it on, is one of the most exciting players in the league but he's inconsistent. There are times when he drops off from devastating into the realms of frustrating.

Liverpool aren't blessed with an abundance of options and have to persevere with the former Inter Milan man. A magician always needs an assistant. That’s meant as no disrespect to Tadić, who can clearly hold his own, but two is always better than one.

The Serbian's arrival would see both shoulder the creative burden meaning the club aren’t solely reliant on the Barcelona transfer target putting in a performance every single week.

The 28-year-old knows the league and has played alongside a variety of strikers meaning he’s just as comfortable playing behind Daniel Sturridge as he would be Roberto Firmino.

After all, he managed to provide service for Graziano Pellè and Shane Long – two different players completely.

That can’t be said for many playmakers in England. 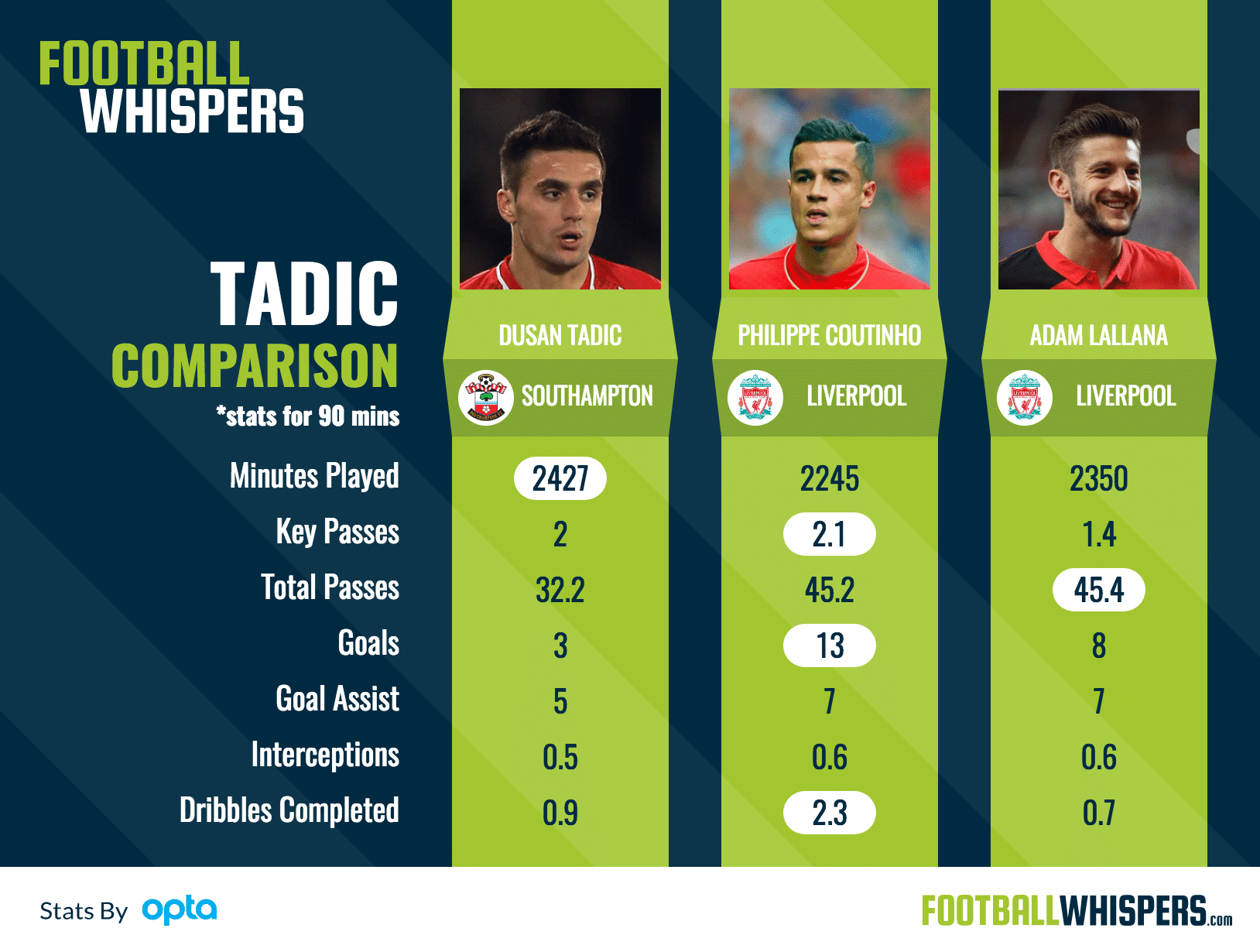 Last season was a disappointing one for the Saints in general and Tadić wasn’t at his creative best, involved in just eight goals — his worst return since moving to England.

Yet despite this, the numbers he posted weren't that bad. He's averaging more key passes than Lallana, the player he replaced at Southampton, and just 0.1 fewer than the maestro Coutinho.

His goal return wasn't impressive but he does know where the back of the net is.

There is an argument to suggest that the Southampton man, alongside one-time Liverpool transfer target Gylfi Sigurðsson, is one of the most underrated creative talents in the Premier League. During his first season in England, the 2014/15 campaign, he was involved in 11 goals but he followed that up with seven goals and 12 assists the year after.

He was involved in a third of the team’s goals and has since gone from being instrumental to being somewhat misused. However, it does go to show how influential he can be if he’s given the platform and backing of a manager.

Since his move from the Netherlands to England, Tadić has racked up 14 goals and 24 assists in three seasons. You’re looking at around five goals and eight assists per season, on average, which is an impressive number.

His last season in the Eredivisie saw him involved in 30 goals (14 of those being assists) in 33 starts. It’s a long shot, but maybe the Premier League is yet to see the best of the Serbian.

It's unlikely he would arrive at Anfield as a first-team player but as a squad member he could be an asset. Similar to that of Yossi Benayoun under Rafael Benítez perhaps. Would it really be such a bad deal at £13million?