Brighton and Hove Albion were perhaps the least romantic of the freshly promoted Premier League sides going into the 2017/18 campaign.

They didn’t have the tradition of David Wagner.

However, as it stands, they currently sit 12th in the table. After ten league fixtures, they have proved that they belong at the top level. Competing in every game, their defence has been integral to their surprising success. And Lewis Dunk has been prominent at the heart of that brick wall back line.

The 25-year-old was born and raised in Brighton and has been with the club from youth team level upwards. He made his debut in League One during the 2009/10 season and went on to establish himself over six years in the Championship.

Having taken quickly to life in the Premier League, Dunk’s central defensive partner, Shane Duffy, was surprised at his omission for the England squad announced earlier this week.

He said: “I think he is capable of being in that squad. It’s up to him now to keep that form up and it will be a matter of time. He can’t get too disappointed at the moment. It’s a big thing for him and I’ve no doubt in my mind he will be an England player.”

Duffy’s words may initially seem like the biased murmurings of a team-mate, but there is a good dose of reality within them. Dunk may lack Premier League experience, but he has already shown enough to suggest he deserves consideration for a national team call-up.

DUNK THE HEART OF BRIGHTON’S DEFENCE

Only seven teams have conceded fewer than Brighton in the Premier League this season. Having let in 11 in ten outings, they have had little difficulty adjusting to the demands associated with facing up to the likes of Manchester City’s Sergio Aguero and Arsenal‘s Alexis Sánchez.

Dunk has defended well, blocking, tackling and intercepting, sometimes at pivotal junctures in opposition moves. Along the way he has demonstrated aerial ability, physical strength and desire, traits one might label stereotypical of the classic English centre-back.

However, he has also shown good reading of the game, proving his tactical intelligence to cut out passes high up the pitch on occasion. In addition to that, he possesses the necessary quality on the ball to operate effectively within the upper echelons of the modern game.

In an interview with The Telegraph in August, Dunk elaborated on his origins. “I used to be a striker, and worked my way back when I was young,” he said. “I got bigger and slower – and went further and further back. I’ve always had the ability on the ball.”

This particular aspect of the 25-year-old’s game has not been emphasised, perhaps because he plays for a team whose first aim is not to concede. But a closer look at the statistics shows Brighton are a nuanced team. While they have the sixth-lowest average possession and the third-highest long balls per game numbers, they sit 12th in a table based on average short passes played.

Those numbers give a slightly deeper understanding of Hughton’s side. While they focus on defending in a low block with a positional focus preferred to intense pressing, they don’t simply hit it long on the counter in search of goals.

Instead they try to build out, constructing attacks from the back. Dunk is arguably more important here than in the defensive phase. 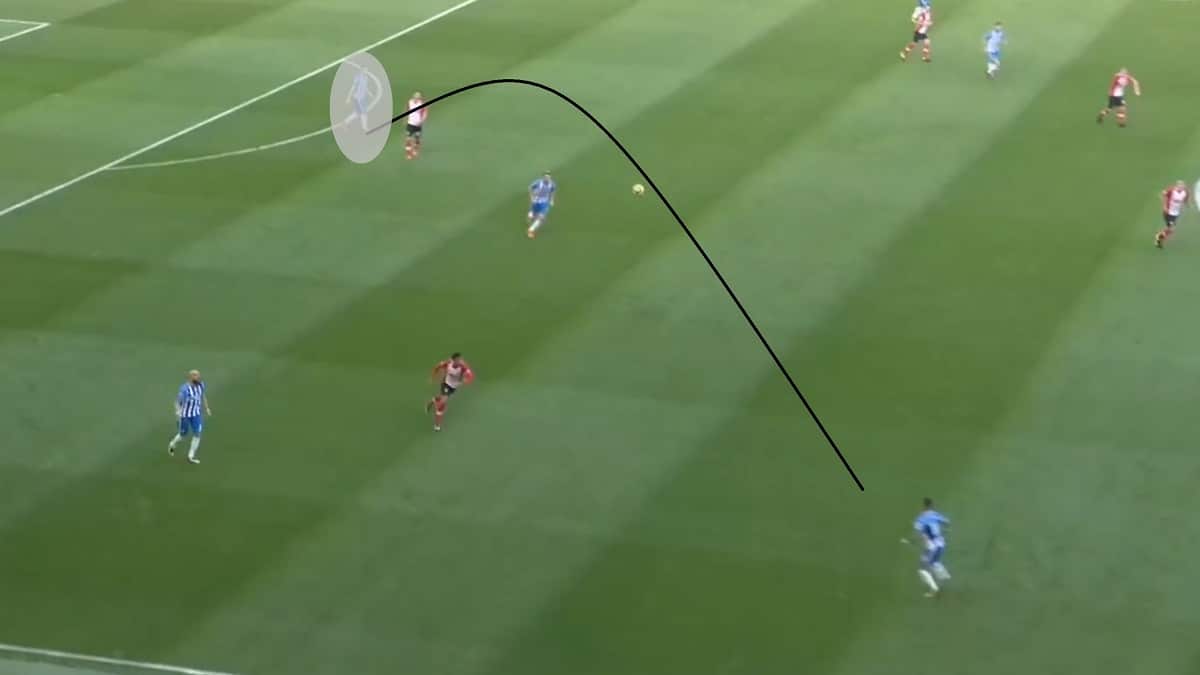 The above image offers one example of what he can do on the ball. Facing direct pressure from a Southampton player, he doesn’t panic. Instead he controls the ball, looks up, identifies a team-mate in a more advanced position, and plays a sumptuous pass over the press.

Dunk tends to keep things simple at short range, but over longer distances he can pick out a fellow Brighton player with unerring accuracy. He is also more than willing and able to drive forward with the ball at feet in an attempt to provoke pressing and create space for others.

Having failed to reach the latter stages of an international tournament since the 2006 World Cup, England are in need of new ideas. Gareth Southgate was not everyone’s choice to lead the team following the Euro 2016 debacle, but he hasn’t been afraid to make drastic changes when necessary.

His most recent big call came in leaving Chris Smalling out of his latest squad for reasons of a technical nature. He justified the decision clearly.

“Chris has got 30 caps, he plays for Manchester United, so I know what he can do…We had the best defensive record in Europe in qualifying. But we're nowhere near the highest scorers and so we've got to address that. Part of that is being able to build and create chances.”

As the orchestrator of Pep Guardiola’s build-up at Manchester City, it’s only natural that John Stones is seen as the future of England in this particular tactical aspect. Alongside him in the current squad are Gary Cahill, Phil Jones and Harry Maguire, but there is a case to be made that Dunk could soon break into that group.

Playing through the opposition is important to an England side who have struggled to break down conservative rivals in the past. With this in mind, the fact that 73.4 per cent of the Brighton man’s passes are forward-thinking is highly relevant.

Dunk’s forward pass percentage is higher than Cahill’s, while his 80 percent pass completion rate is higher than Maguire’s. He also creates more chances on average than Jones, while he completes more take-ons than Stones.

It may be early days for the player as far as Premier League football is concerned, but his statistics are suggestive of someone who could be considered among the best English centre-backs around today. When Hughton described his central defensive bulwark as “a very good footballer for a centre half” he wasn’t overestimating.

Dunk is a defender in a defensive team, but his talent in possession is shining through. For that reason, he should be on Southgate’s shortlist of ball-playing centre-backs.