Dundee United arrive in this game in good form and will expect to beat Elgin City. Will they? Find out with our Dundee United vs Elgin City match preview with free tips, predictions and odds mentioned along the way.

A win with room to spare

Dundee United come into this match on a five game unbeaten stretch that includes two wins from their last two. With Elgin City having won one, drawn one and lost three of their previous five things don't look great for the way side. Dundee United are unlikely to be content with just a one goal win here and given Elgin City are way down the pyramid in League Two anything but a mauling would be deemed a good display; last time the sides met, Dundee United won 4-0. Here we just need a two-goal cushion for the prediction to come in.

Goals? Sure, but not loads

We've just talked about a 4-0 win for Dundee United last time they faced Elgin City. We don't think there will be quite so many goals in this game though. Dundee United have only surpassed the 3.5 mark in two of their last 10 games. Elgin City tend to see more goals in their matches – they usually concede them. If their last performance in this competition is anything to go by though, their style of play will limit the damage Dundee United can do.

A win and clean sheet

We've made it quite clear that Dundee United are our pick to run out winners. Now we go a step deeper and back them to do so without conceding a goal. They have recorded two clean sheets in their last five, which whilst not amazing is hardly terrible. What gives this bet real value though is that Elgin City have blanked in three of their last five matches. Of course, as mentioned, they also failed to score last time they met Dundee United as they tasted a 4-0 defeat.

Find the best odds for Dundee United vs Elgin City

When you're unbeaten in five there is a certain confidence that will come into the camp. That will grow further when you record back to back victories as Dundee United have done. A home tie against a lower league team will be seen as a great chance to get another win on the board. For the hosts, Nicholas Clark is the man to watch; he scored a hat-trick in their recent friendly win over Brechin. Then there is the away side, Elgin City. Their main men are the Dingwall brothers – Russell and Tony. Both play in midfield and, Russell – a holding midfielder – will need to turn in a top quality performance if his side are to stand a chance. 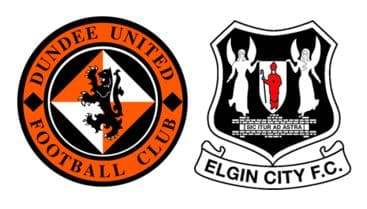