Dundee United and Arbroath sit first and second in their group with two wins from two. Something has to give when they meet each other but what? Find out with our Dundee United vs Arbroath match preview with free tips, predictions and odds mentioned along the way.

A comfortable day for Dundee United

Arbroath might sit with two wins from two in the league cup but their longer term form isn't amazing; they were winless in four before those two games. Dundee United have been in somewhat better shape having won three on the spin. They've not lost since early May either. It's not just about winning for this prediction though, we need Dundee United to win by two clear goals. If their 6-1 mauling of Elgin – a side Arbroath beat 1-0 last week – is anything to go by then it shouldn't be a problem.

Not an abundance of goals

The first of our tips touched on a 6-1 Dundee United win; it's not an every day occurrence. The recent stats of both teams suggest this game will be unlikely to exceed 2.5 goals as well. Dundee United have only gone past the 2.5 mark on two occasions in five games. For Arbroath, only one of their last five games has seen over two goals. In respect of game averages, Arbroath sit on 1.8 goals from their prior five. Dundee United are higher at 3.0 but that's including their seven goal game from Wednesday evening.

Our final prediction is for Dundee United to run out 2-0 winners. Arbroath haven't scored more than one goal in the last five head to head meetings and their last five games have seen them blank twice netting just a total of four goals. For Dundee United, they've averaged 2.4 goals scored per match in their past five. That drops to 1.5 if you ignore their last high scoring match. Dundee United won't put six past Arbroath and 2-0 looks like a good bet.

Check out the key info for Dundee United vs Arbroath

Dundee United come into this game off a good run of form that was capped off with a terrific 6-1 win last time out. They won't be expecting to bag another half dozen here but with Lawrence Shankland having bagged four in four, they'll hope to have enough cutting edge to make the match comfortable. Arbroath have made a good start to their cup campaign too but this is their biggest test to date. They'll stand the best chance of getting a result by keeping Shankland and co quiet; that's a big job for Ricky Little and his defensive partners. 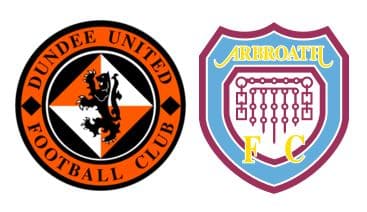