When clubs are tweeting official photos of a summer signing at 01:33 in the morning, you know it must be transfer deadline day. Bleary-eyed, but happy, Chelsea finally were able to confirm the signing of Danny Drinkwater from Leicester City in the early hours of Friday morning.

“I’m delighted to be a Chelsea player and can’t wait to get started,” the England international told the Blues official website. “It has been a long journey to get here but I am very happy and am looking forward to helping the club win more trophies.”

When Nemanja Matić joined Manchester United for £40million earlier this summer it was seen as yet more shrewd business from Chelsea. But the big Serbian left a big hole in an already depleted squad. Reinforcements were needed.

Tiemoue Bakayoko arrived from Monaco but that wasn't enough, especially as Nathaniel Chalobah was then sold to Watford while Ruben Loftus-Cheek was loaned to Crystal Palace for the season.

It was poor planning on Chelsea's part and understandably Antonio Conte wasn't happy. The Italian knew his squad was deep enough to mount a title challenge and demanded signings.

The Premier League titleholders were linked with a move for Bayern Munich’s Renato Sanches but the German club didn't want the youngster to join a potential Champions League rival.

Initially the Blues had a bid of £25million turned down but they managed to complete a deadline day deal with the Foxes, paying £35m to secure his signing.

At 27, the Leicester man is a dogged ball-winner with three England caps to his name. He was integral to his club’s surprise 2015/16 Premier League title win and experienced Champions League football last season.

So Drinkwater ticks a lot of boxes and he also won't need time to settle in the Premier League.

When Chelsea's squad reconvenes after the international break, the midfielder should be ready to stake a claim for a place in the side against, quaintly, Leicester.

However, Drinkwater won't be a direct replacement for Matić, he is a far more tenacious operator. While the latter is a sound passer, the former is more renowned for his work in the defensive phase. 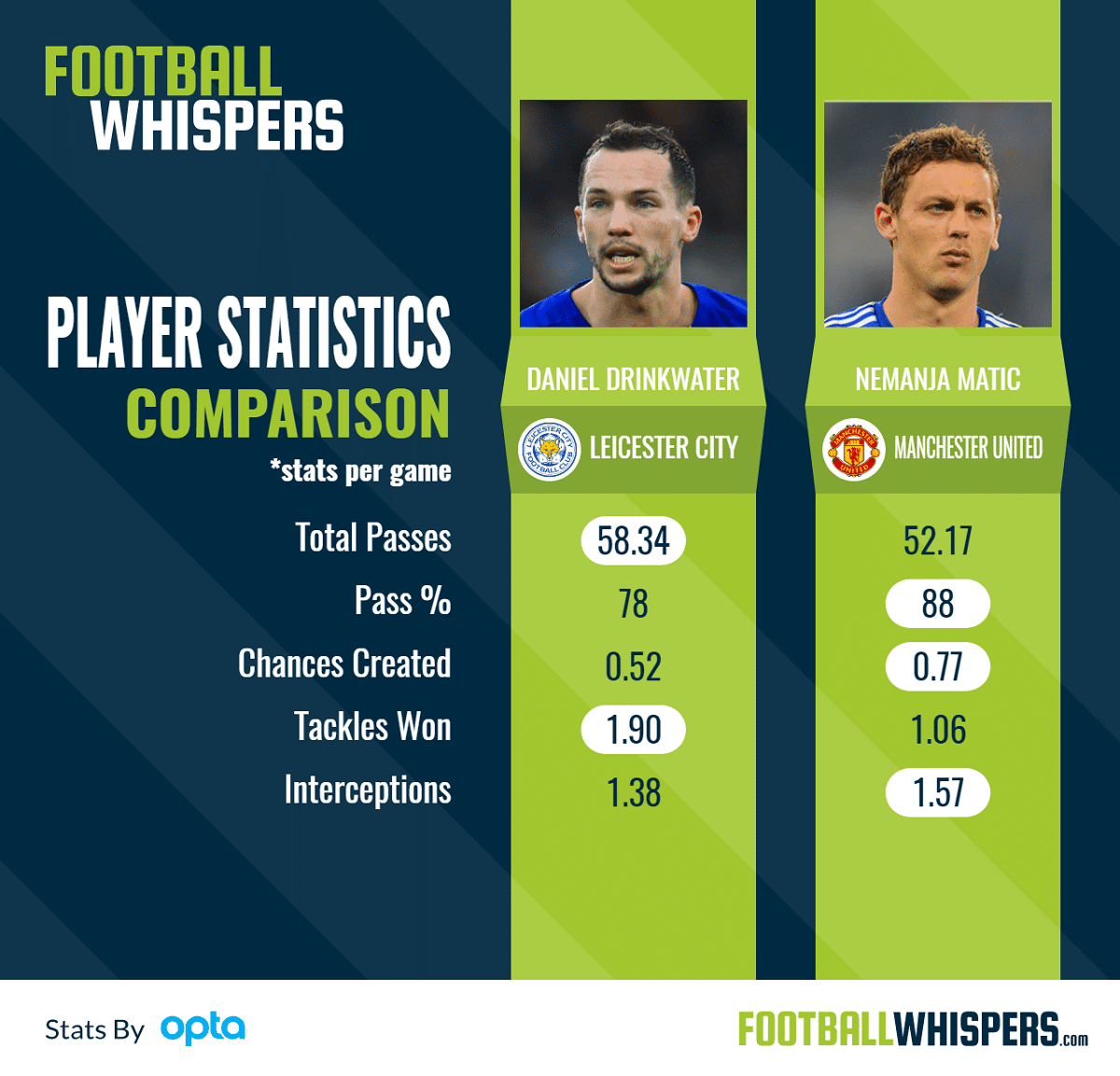 However, his pass success rate was ten per cent lower, he created 0.25 chances per game fewer, won a lower percentage of his attempted tackles, and completed fewer interceptions.

Those numbers should increase were Drinkwater to play in Conte’s midfield two, but how much game time he will get at Stamford Bridge is the real question.

If Kante, Bakayoko and Cesc Fabregas are all fit then the former Leicester star is Chelsea's fourth choice central midfielder. He simply may not get the opportunity to prove he is capable of thriving for Chelsea.