As he shuffled right to evade his marker, his team-mates started to migrate towards the back post in anticipation of a cross being delivered, but Dries Mertens had other ideas.

Having already completed his hat-trick – a second Serie A treble in as many games – the diminutive Belgian was imbued with the level confidence that only comes with such a goal-scoring streak. That belief that any shot you take will be magnetically drawn to the back of the net; fearing no goalkeeper and unencumbered by the attention of even the finest defenders.

So rather than play the percentages and aim to pick out an expectant colleague, Mertens pivoted as he drew back his right foot and, like a golfer delicately escaping a bunker to find the green with a perfectly pitched swing, sent the ball sailing over a helpless Joe Hart and into the Torino goal.

Time seemed to stop for a heartbeat inside the Stadio San Paolo, as supports craned their necks and strained their gaze to verify that Mertens had indeed pulled off the most exquisite lob. 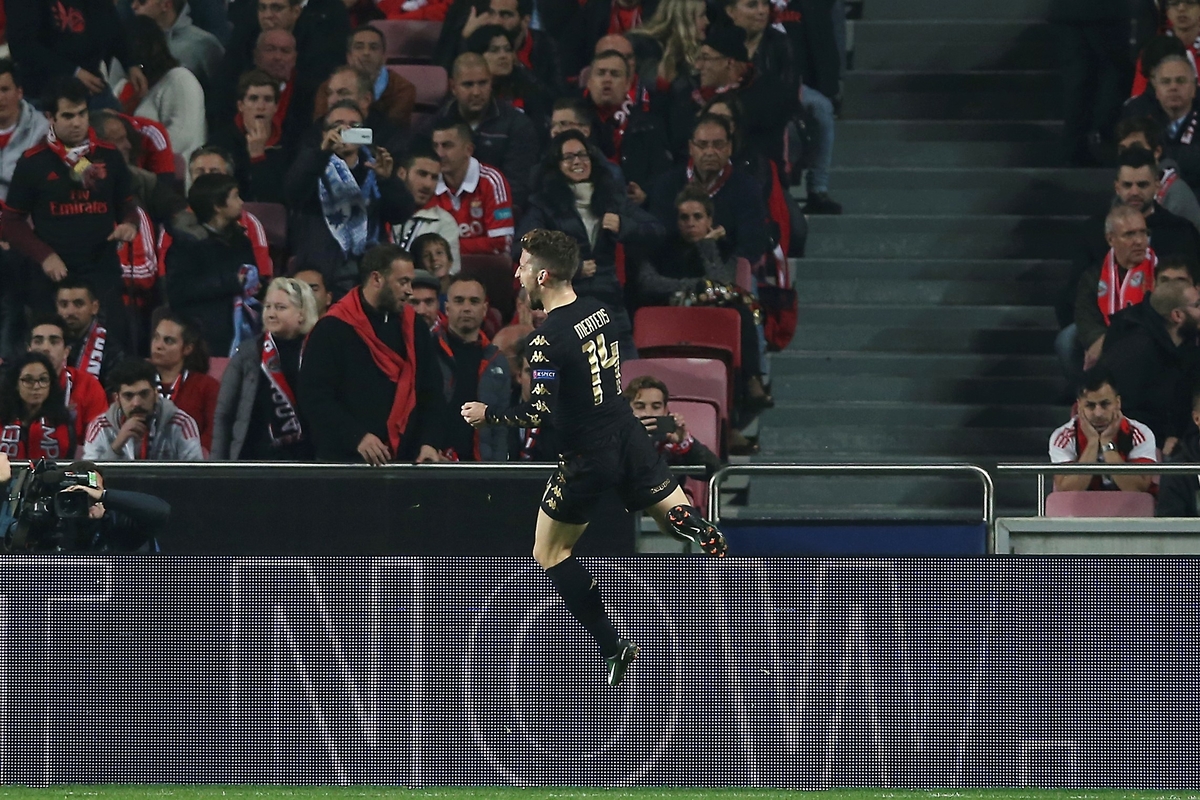 While the 21 other players on the pitch stood frozen by a mixture of disbelief and admiration, the goal-scorer immediately sprinted onto the track that surrounds the pitch at Napoli’s home ground to bask in the acclaim of the Partenopei faithful. Fans for whom this player, formerly viewed as little more than a useful back-up attacker, was quickly becoming their newest darling.

The loss of star striker Gonzalo Higuain to Juventus over the summer, followed by the long-term injury layoff of €30 million signing Arkadiusz Milik on 2 October, meant that Napoli were left with a void to fill at the point of their attack.

Manolo Gabbiadini, a technically gifted forward with a deft left foot, was thrust into the role but has flattered to deceive thus far, having scored just two goals from 16 appearances this season.

Coach Maurizio Sarri has since elected to experiement with playing Mertens, a right-winger by trade, as his central striker, and the decision is paying dividends.

The Belgian has netted 14 goals so far this term, nine of which have been plundered during his eight appearances as a centre-forward. Indeed, in his last three outings alone Mertens has bagged a remarkable eight goals as well as providing one assist. 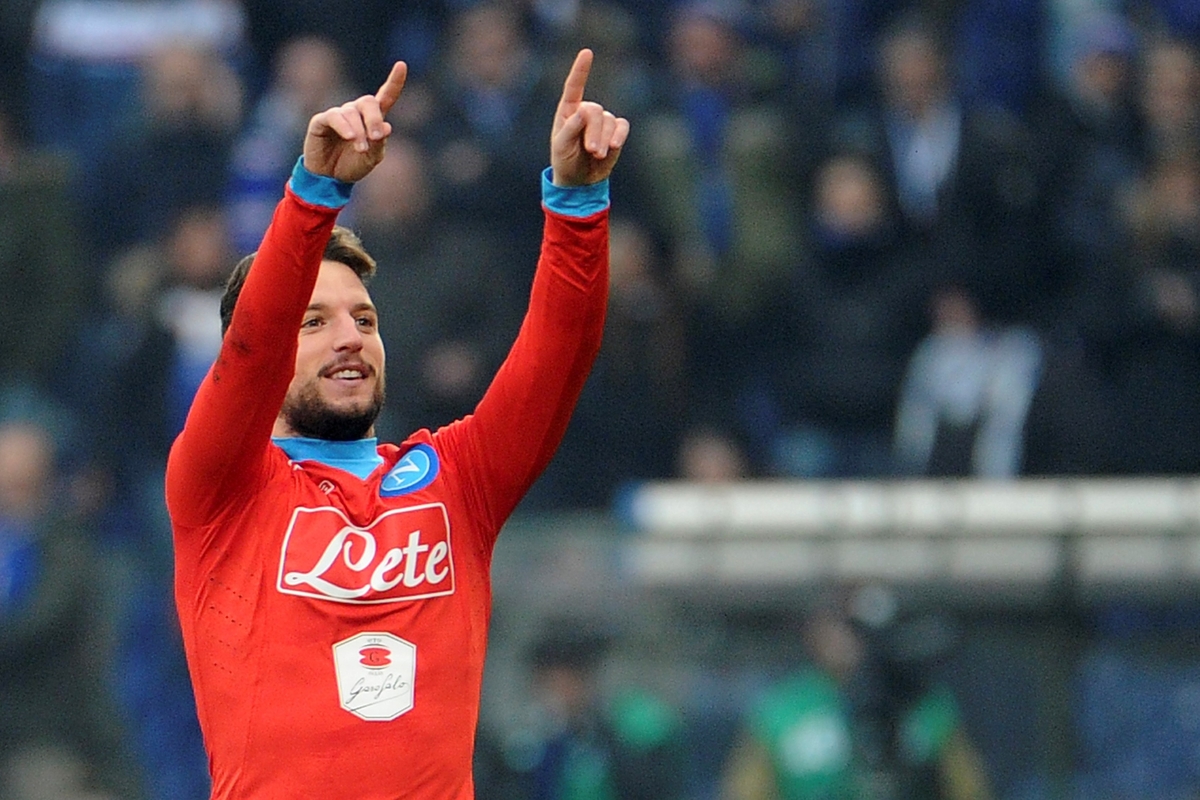 And the former PSV Eindhoven player’s seamless adaptation to his new position has coincided with Napoli overcoming a run of indifferent results to climb back into the top three.

The rejuvenation of Sarri’s side has been built on an exhilarating attack. Last weekend’s 5-3 win over Torino was preceded by a 5-0 trouncing of Cagliari and a resounding 3-0 victory over Internazionale.

Although he made his name as a winger, Mertens’ skillset always pointed towards the potential for him to excel in a more central role.

Blessed with tremendous pace, the Leuven-born player has, for years now, consistently demonstrated his ability to time runs in behind opposition defensive lines, travelling from outside into central zones where, if picked out by a well-timed pass, he would be within sight of goal.

And, more often than not, he would finish from such a position, usually opting to strike the ball powerfully across the goalkeeper, toward the far post. With hindsight, his composure and technique in these situations made him an obvious candidate to slot into the role he has occupied in recent weeks.

The term false No. 9 is often misappropriated in modern football parlance. The label is far too readily slapped on any midfielder operating as a centre-forward, when, in reality, the description relates to how a player plays within the role, not merely who is playing it. A traditional striker could choose to operate as a false No. 9, just as a midfielder could be deployed as an out-and-out poacher.

The role of a false No.9 is to occupy zones which are usually reserved for an attacking midfielder, just behind where you’d expect the striker to be. The point of this is to leave the opposing centre-backs with no one to mark, while the forward augments the midfield and links with the wide players. The space vacated by the false No. 9 leaves room for the wide players to break into, or for the player himself to suddenly appear in as an attack progresses — think Lionel Messi for Barcelona circa 2011, or Alexis Sanchez for Arsenal this season.

In this respect, Mertens is not a false No. 9 for Napoli. Sure, he comes deep and links with the midfield, and often facilitates Jose Callejon’s advances from the wing into goal-scoring positions. Against Il Toro at the weekend, he linked with the Spaniard 24 times, and 15 times with Lorenzo Insigne on the opposite flank. 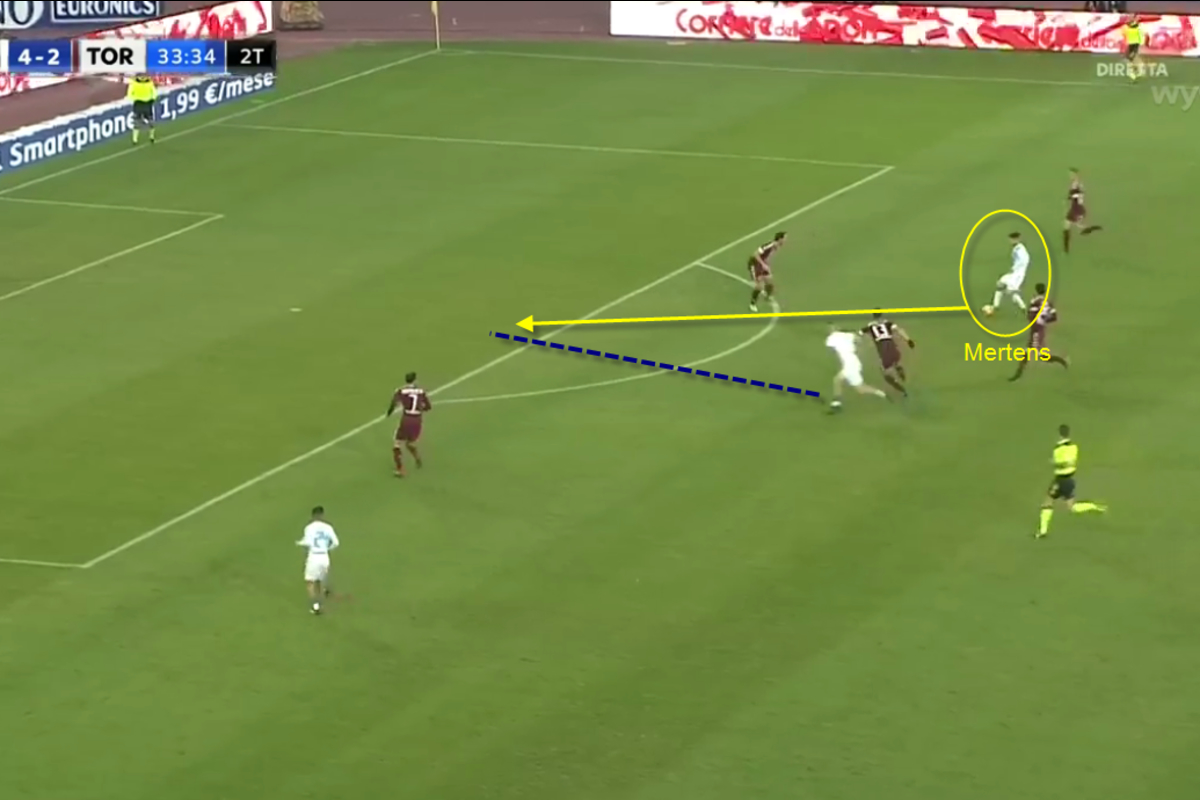 The above image shows Mertens dropping off the front line against Torino, creating space for Marek Hamsik to break into and picking the midfielder out with an accurate through-ball.

But he also spends much of his time playing on the shoulder of the opponents’ deepest defender, stretching play and threatening to break in behind with his electric pace. Not a pure poacher, but also far from a glorified midfielder; Mertens is an all-round centre-forward for Napoli. 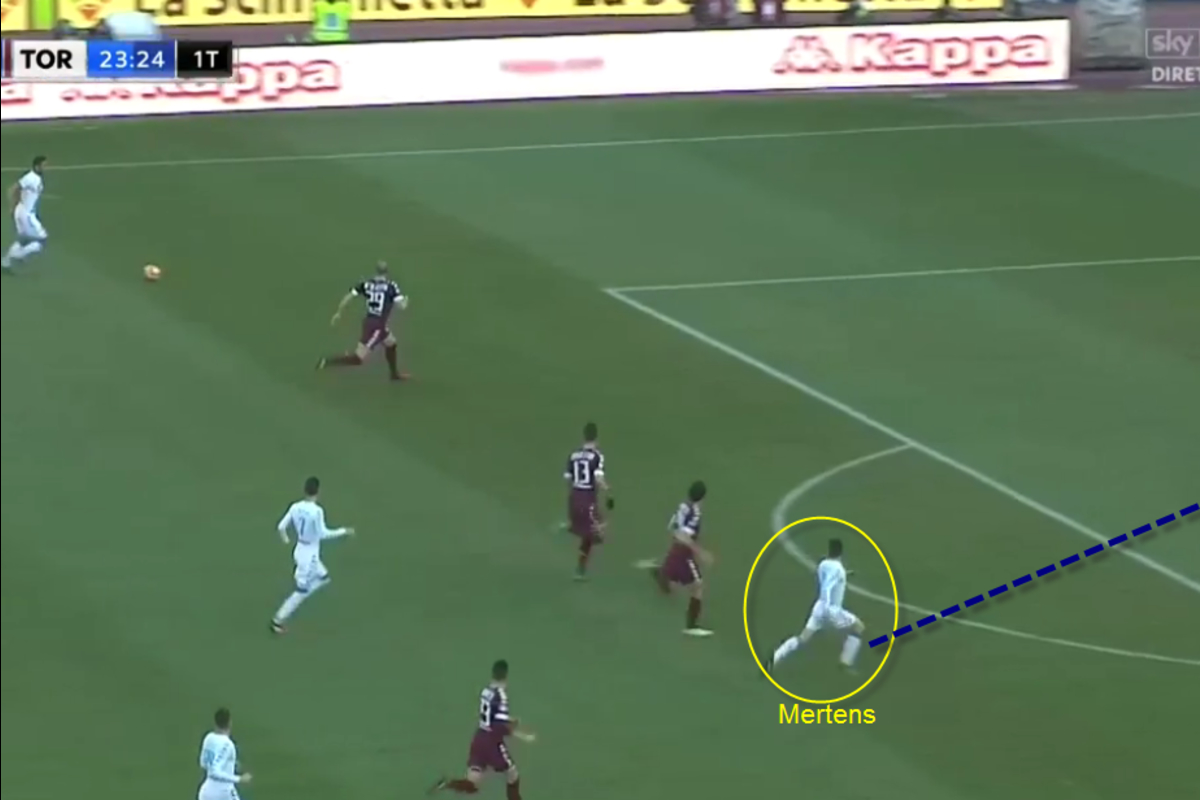 This screenshot shows Mertens playing on the shoulder of the Torino defensive line and breaking into the penalty area to meet a cross from wide.

Having already eclipsed his return of just five goals in 33 Serie A appearances from last term, Mertens looks set for a career-high level of productivity.

However, his tally for the previous campaign is more impressive than it appears on first inspection, as only six of his 33 league outings were starts. In 1086 minutes of action, the 55-cap Red Devils star averaged a goal or an assist every 108 minutes – again, evidence of the potency that Sarri is now tapping into.

In his last three games – against Torino and Cagliari in Serie A and Benfica in the Champions League – Mertens has found the net every 24.75 minutes on average.

This kind of superhuman form will have to level off at some point in the near future, but, right now, Napoli’s No. 14 is riding a wave of momentum which is carrying the Partenopei right back to where they feel they belong: in the upper echelons of Serie A.