Top free betting tips and odds for Dreams vs Medeama

Medeama makes a visit to Dreams FC to play the final game of the Ghana Premier League on Sunday, 19 June. Both teams have got the back of consecutive victories ahead of this game.

Dreams are unbeaten in the last four attempts and recorded two wins in a row previously. Medeama has also got three victories in the last five attempts. However, Still, Believe has got a series of undefeated games at their home games. Dreams FC have also been dominant in their hosting H2Hs and remained unbeaten, winning two of the three. We expect a tough duel between the teams in this clash but predict Dreams to get the advantage of the home stadium and register the lead.

Following the recent H2H at Dreams’ home, we predict the same outcome of the BTTS pattern in this game as well. Despite not getting a huge total of goals, the hosts have been on the scoring side in all of the recent home attempts. On the other hand, Medeama has also found the back of the net in three of the previous four outings. However, Dream FC will be confident to restrict Mauve and Yellow to a low score after getting the successive clean sheets.

Dreams vs Medeama: Check out the best odds and the latest stats

Questions About Dreams vs Medeama 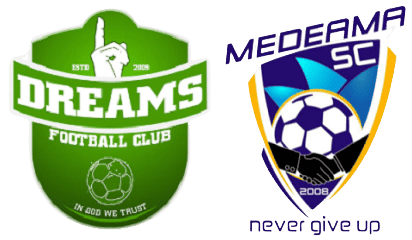 Where is the game being played? Dawu Sports Stadium.