This is a match up between two largely midtable sides. Who will come out on top as they face off? Find out with our Dreams vs Ashanti Gold match preview with free tips, predictions and odds mentioned along the way.

A win for Ashanti Gold

Despite their recent shortcomings, Dreams have scored a lot of goals; as a matter of fact, no team has scored more goals than Dreams this season. It's worth noting that Dreams scored in six of their last seven games, whilst keeping just one clean sheet in their last eight games. Like Dreams, Ashanti Gold have not had too much trouble finding the net; only Dreams and league leaders Asante Kotoko have scored more goals than Ashanti Gold this season. Both teams scored in six of Dreams' last seven, and four of Ashanti Gold's last five games; for this reason, we should expect goals at both ends.

A midtable clash with little to play for

Let's be honest, we can talk this game up but, ultimately, regardless of what happens come the final whistle, the season outlook is not likely to be altered with Dreams and Ashanti Gold both looking destined for midtable.

Things have not gone too well for Dreams the past couple of months; they are without a win in their last eight games, with three draws and five losses. Dreams are 14th on the table, just two points clear off the relegation zone; they'll hope to put some distance between themselves and the relegation zone by winning this game.

A quickfire FAQ on Dreams vs Ashanti Gold 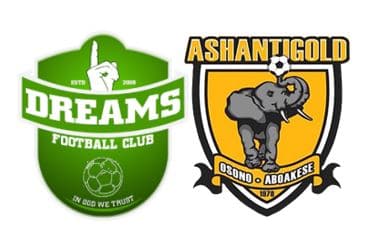