Julian Draxler‘s had a funny career. During the 2010/11 season, his emergence as a fresh-faced 17-year-old at Schalke established him as one of Europe's most promising young playmakers.

He proceeded to become a leading light at the Veltins Arena, shining either on the left flank or as the side's chief playmaker through the centre, forging an effective understanding with Spain legend Raúl first and Klaas-Jan Huntelaar second.

His performances throughout the 2013/14 campaign earned him a place in Kicker's Bundesliga Team of the Season and he arrived in Brazil for Germany's World Cup campaign as the newly-named Young Player of the Year.

An injury-disrupted 2014/15 campaign did little to diminish his rising stock. Having missed nearly five months with a tendon crack, Draxler was chased by Juventus soon after his return to action.

Although a move to Turin didn't materialise, he joined Wolfsburg on transfer deadline day in August 2015, his £25.5million switch becoming the then second-highest fee in Bundesliga history (behind Mario Götze to Bayern Munich).

The midfielder was also assured of a prominent first-team role at the Volkswagen Arena as the natural creative successor to Manchester City-bound Kevin De Bruyne.

It didn't work out. Draxler struggled to meet expectations and, 18 months later, he was off to France, becoming the latest high-profile arrival at Paris Saint-Germain.

At that time, the perception around him had changed. Once considered a German prodigy, Draxler headed for the French capital with a dented reputation.

Both his performances and attitude had been questioned at Wolfsburg and, in truth, he has never fully blossomed at the Parc des Princes either. Although he started promisingly after joining in January 2017, he has been routinely outshone by Les Parisiens' more glamorous recruits in the shape of Neymar and Kylian Mbappé, both of whom arrived six months later.

As a result, Draxler has often been a peripheral figure in Ligue 1. He has started 41 league games over the past two seasons and three in each of the last two Champions League campaigns. He did start both of the last-16 legs against Manchester United but was hooked off in the second game as Thomas Tuchel's side crashed out in dramatic circumstances.

Now, the 25-year-old is being linked with a move away from the French champions. According to France Football, he will be allowed to leave for £30million. Bayern Munich, Tottenham Hotspur and Inter Milan are all credited with an interest.

The Bundesliga giants have long been touted as a potential destination but Draxler is likely to find his game time restricted at the Allianz Arena as it has been at PSG. And while Inter may soon be an attractive proposition with Antonio Conte expected to assume managerial duties, Tottenham seems like a more natural fit for the 49-time Germany international. 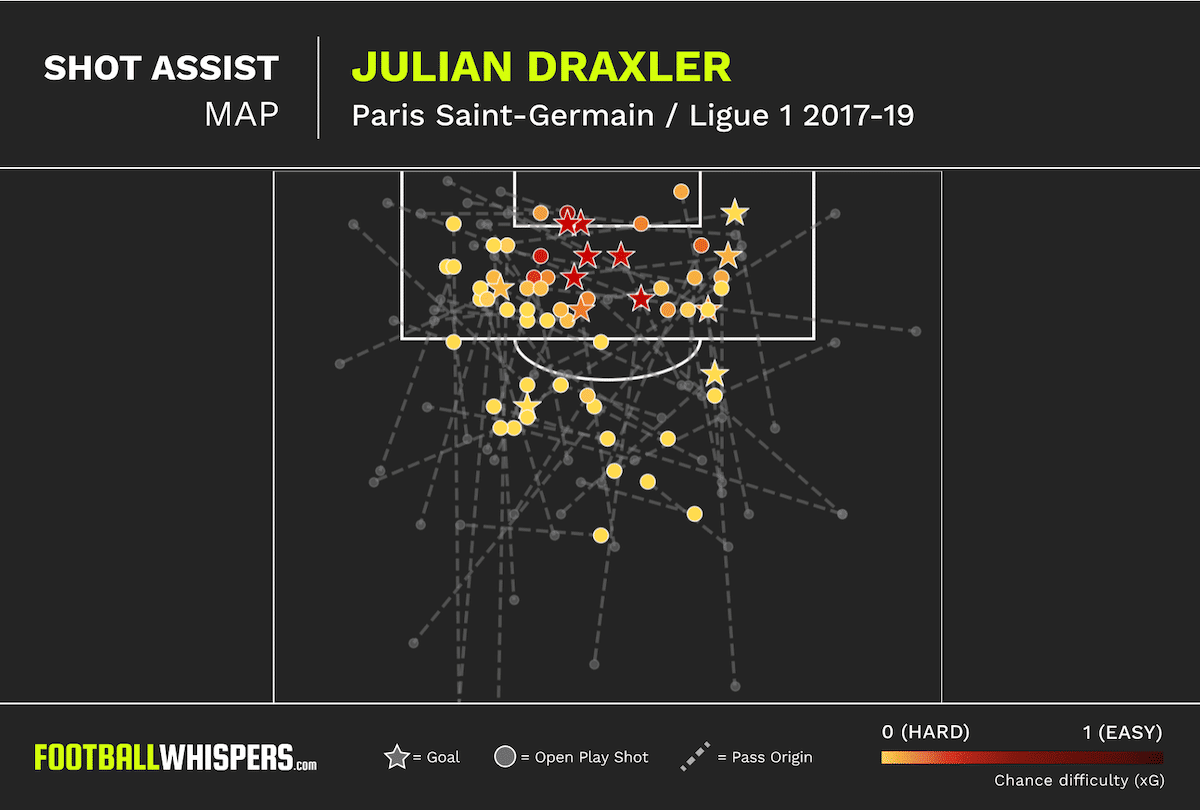 Draxler is versatile, dynamic, two-footed and highly creative. Assuming Mauricio Pochettino stays, he would be comfortable slotting into one of the three positions behind Harry Kane.

He would offer variety and flexibility. When given freedom to roam, he is effective at finding space and connecting the play between defence and attack. A competent ball-carrier, he is also technically refined, able to operate in tight spaces with limited time. Draxler also has the intelligence to drop off and cover midfielders when they embark on adventurous runs (Moussa Sissoko springs to mind).

His problem at PSG has often been tactical. His versatility has seen Tuchel play him either in a more advanced role or further back, like in the defeat to Rennes, in which he partnered Marco Verratti in central midfield as part of a 3-4-2-1, with Ángel Di María and Neymar in behind Mbappé.

But Draxler has always been more effective higher up the pitch. He was hugely effective both playing off the left and through the centre for Schalke, but has often taken up deeper roles under Tuchel at PSG, sometimes filling in for Verratti. 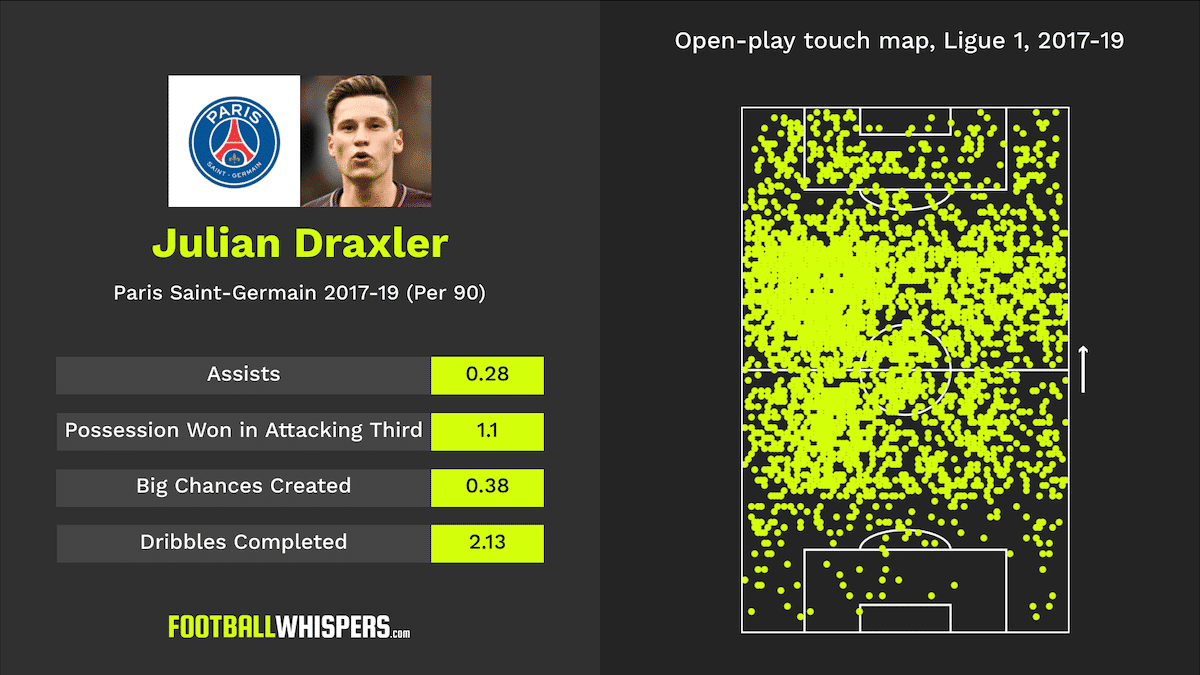 If he joined Spurs as a replacement for Christian Eriksen, though, he would, presumably, be deployed in a more advanced role in Pochettino's 4-2-3-1. He can also be deadly as one of the wingers in a 4-3-3.

Indeed, one of his most eye-catching performances this season was on the left of Tuchel's 4-3-3 against Saint-Étienne, scoring in the 4-0 win.

Draxler's return of three goals and eight assists in just over 2,000 minutes of Ligue 1 action this season suggests that he can still produce consistently in the final third. He is a natural innovator and it is easy to imagine him developing an understanding with Kane as he did with Huntelaar.

Draxler is capable of performing other roles, too. Neymar, according to Le Parisien, blasted the German for always passing backwards, and the Brazilian has a point: Draxler averages more backward passes per 90 (15.33) than any other midfielder in France's top tier.

But, since August 2017, he also has on average won possession in the attacking third more than any player in his position. He's also ranked fifth for through balls completed and tenth in total expected goals assisted (xA).

Draxler doesn't turn 26 until September. With his peak years ahead of him, he can be reborn in the Premier League. At PSG, there is a suspicion that he will never fully emerge from the shadows of his more illustrious teammates.

However, he is likely to hear encouraging reports of Spurs from ex-teammate Lucas Moura.

Draxler has a lot of the tools; he is quick, creative and tactically astute. He just needs the right environment in which to flourish.

Lucas never really shone consistently in Paris but has been reborn under Pochettino. Draxler, once tipped for superstardom, can follow the Brazilian's path and embark on an exciting new chapter in England.