If you believe reports, Julian Draxler is a long-term Liverpool transfer target. The Reds missed out to Paris Saint-Germain in January 2017 when the 23-year-old moved to France to bring his underwhelming spell with VfL Wolfsburg to an end.

The Ligue 1 side paid in the region of £40million to secure the German international's services, according to various stories, but, according to L'Equipe, they could allow him to leave with Liverpool having enquired over a possible loan move for the player.

The former Schalke midfielder has been a victim of Neymar's move to the French capital, despite generally impressing during his time with the club.

Although right-footed, he can play on the left, or anywhere across the attack, and is often found cutting inside onto his stronger foot. Physically imposing, he could play a number of roles in a Jürgen Klopp system.

He can operate in one of the forward positions if one of Sadio Mané or Mohamed Salah are unavailable, or simple play in more of a box-to-box role, something now associated with Adam Lallana.

Liverpool have a strong starting XI. But beyond that their options are fairly limited. In the opening weeks of this season, Klopp had been unable to call upon Barcelona transfer target Philippe Coutinho and Lallana, and in their absence they often looked predictable and almost lethargic in possession.

Coutinho returned positively from the back injury which had previously ruled him out. Lallana, however, has seen his Liverpool career plagued by the occasional knock and, at 29 years of age, he's by no means a long-term option for the Reds.

He shouldn't be phased out just yet but to rely on him would be a little naive from Klopp, especially with more games on the horizon this time around if the club qualify for the Champions League knockout stages.

So, is the chance to sign Draxler too good of an opportunity to pass up? What exactly would he bring to the Liverpool team and how does he compare to Coutinho and Lallana?

To answer these questions as accurately as possible, it's best to look at last season's stats for a more comprehensive picture as all three have struggled for consistent game time throughout this campaign. 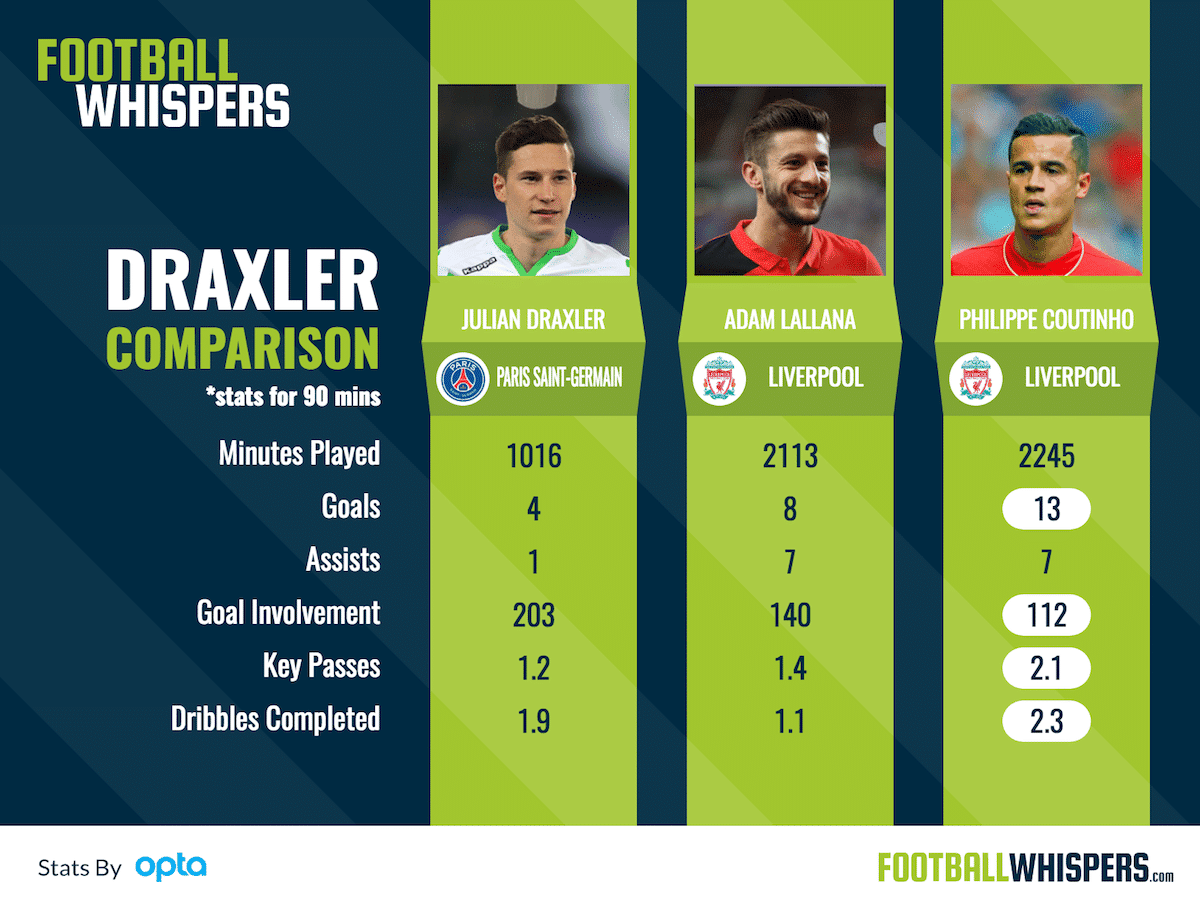 First off, Draxler played fewer minutes than Lallana and Coutinho which is worth taking into account.

He was involved in a goal every 203 minutes which is the worst of the three players. But the more time spent on the pitch the more involved he would be, especially if he was operating in a central area.

He completed more dribbles than Lallana which is a important for a Klopp midfielder as the Reds often have to find a way through organised defensive units. Having the ability to glide past an opponent, take them out of the game and create space are tools all Liverpool attackers require.

For the rumoured £32million it's an absolute no brainer for Liverpool to make a move for the German.