Douglas Costa has been perpetually linked with a transfer to the Premier League but if reports are accurate, a move to England may come to fruition this summer.

The 28-year-old has been linked with Manchester United, Manchester City and Tottenham Hotspur over recent days while Paris Saint-Germain are believed to be long-term admirers of the explosive winger.

Prior to his move to Bayern Munich during the summer of 2015, he was reportedly a Liverpool transfer target while Chelsea and United held an interest after impressing for Ukranian side Shakhtar Donetsk.

Before finally agreeing on a loan move to Juventus in 2017, Liverpool were again named as a potential destination for the left-footed forward, this time along with Manchester City and Spurs.

However, It could be third time lucky for the Brazilian with reports in Italy claiming Juventus are ready to cash in on a player they paid €40million for just ten months ago.

A change in the system used by Massimiliano Allegri, the arrival of Cristiano Ronaldo and a number of injuries have stalled his career with the Serie A champions, but his stock remains high.

On his day, Costa is unstoppable on that left flank. And it’s easy to understand exactly why so many of Europe’s elite are interested in bringing him in. He’s an out ball, capable of carrying possession over long distances in the blink of an eye, and a throwback to the wingers of the 1990s.

He’s perfect for a more direct approach to games and he’d be an asset to any of the clubs reportedly keen on signing him. 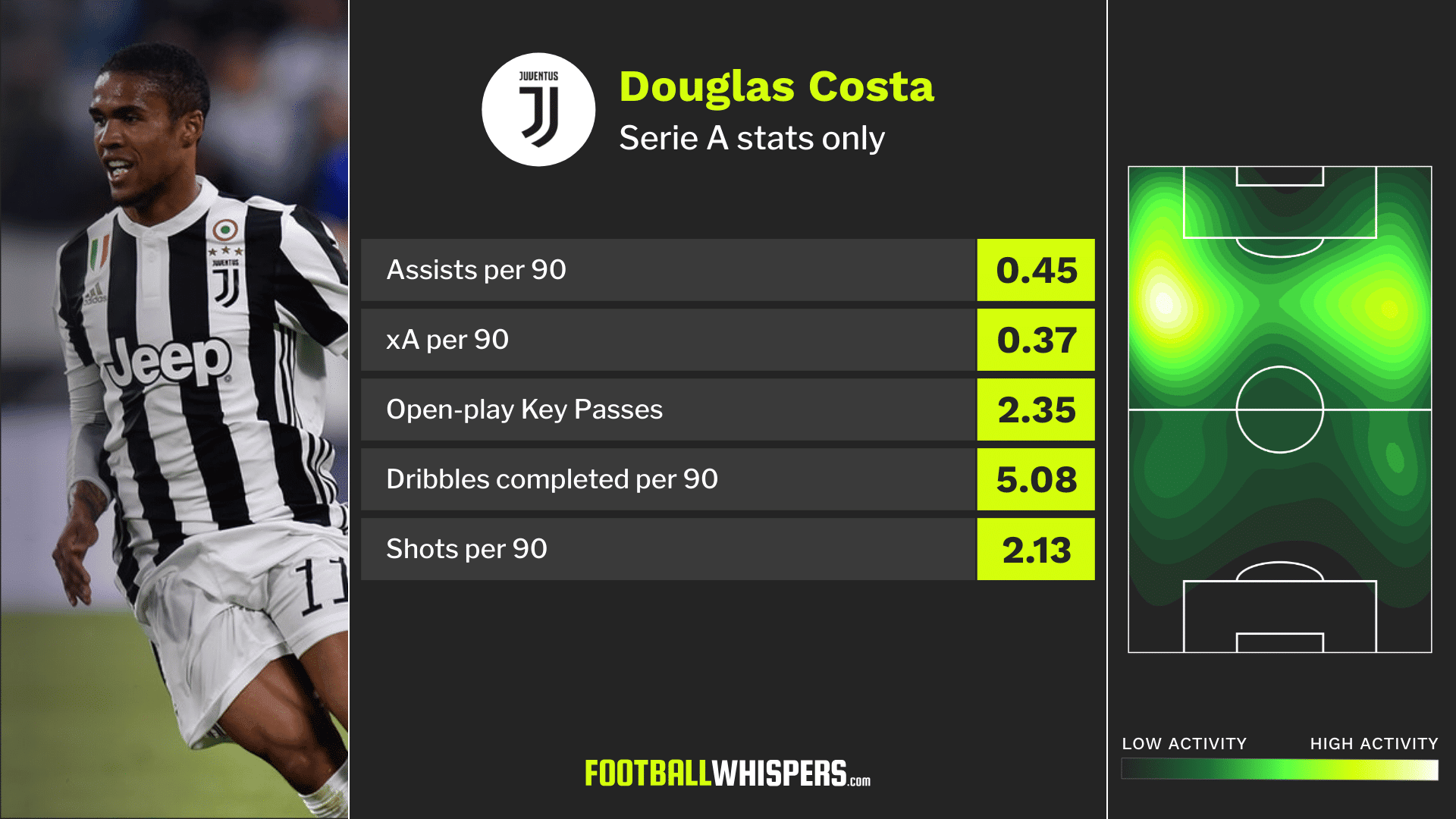 Since his move to Italy, he's averaged 0.37 expected assists on a per 90-minute basis while actually supplying 0.45 assists, a stat no midfielder can better. The latter stat is influenced more so by the finishing ability of his team-mates, it's the former stat worth taking note of. He's creating high-quality chances on a regular basis.

In fact, his average of 0.37 xA90 is the second highest in Serie A during that time period. He's been incredibly consistent in the 2,409 of minutes he's played in the Italian top flight.

Furthermore, he's ranked first for dribbles completed and is in the top ten for crosses attempted (1.45 per 90 minutes). Only three midfielders can better his 4.05 touches in the opposition's penalty area average since his move to Serie A.

These stats help paint a picture of the type of player Costa is.

A dynamic, aggressive winger who looks to beat his man and deliver the ball into dangerous areas with great regularity. 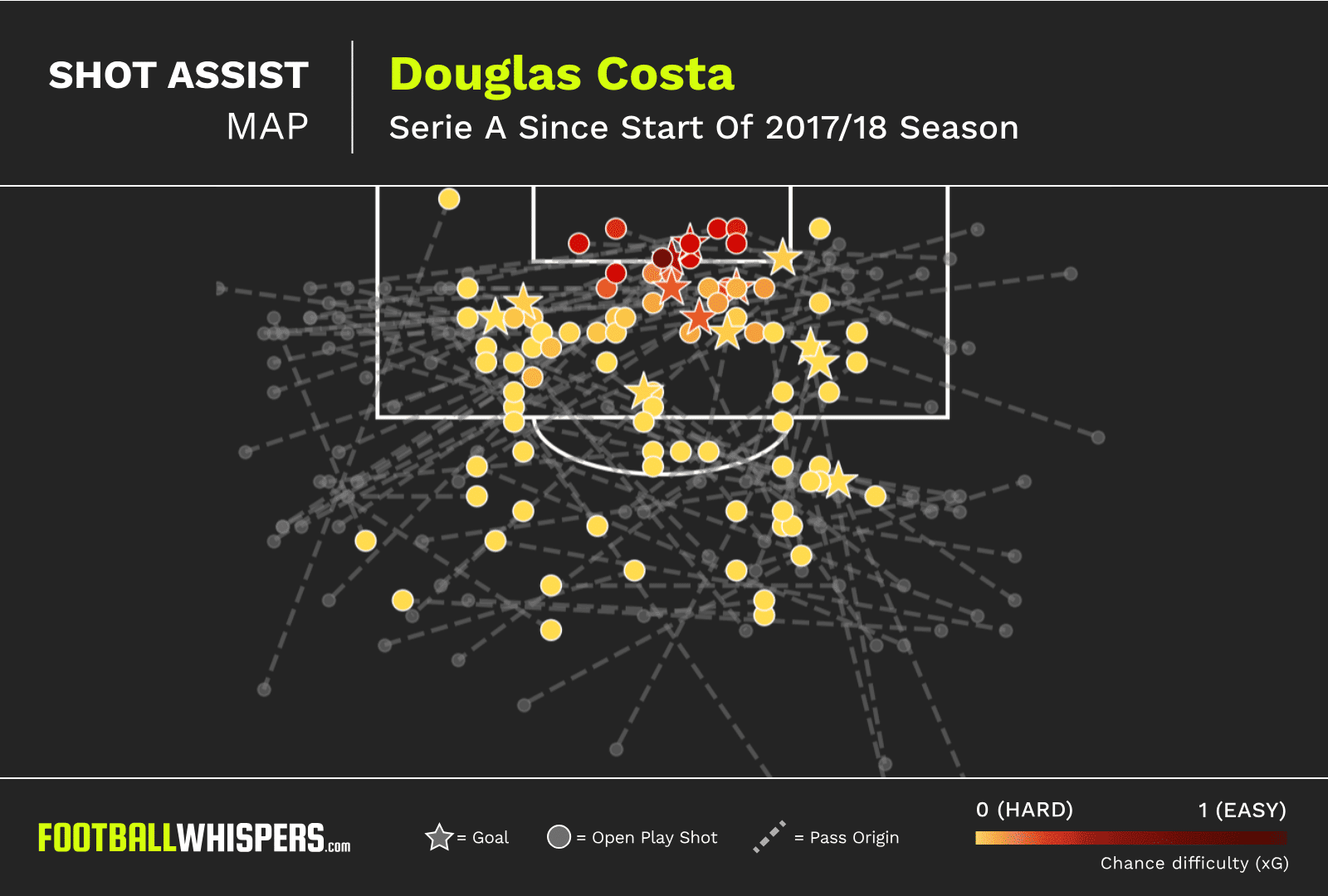 It's evident in his shot assist map above. This does what it says on the tin and tracks where the pass arrived from prior to the shot. The majority of his actions from the left flank and are crosses or passes into the penalty area. It's little wonder his xA90 average is so high when you see where exactly it is he's putting the ball.

However, his strength may also be his weakness. As more of a traditional winger, he's not an adept goalscorer. In the modern game, wide forwards are expected to chip in with goals.

The Brazil international has just five since his switch to Juventus and his xG90 (expected goals per 90) average comes in at 0.11 – a total of 36 midfielders can better.

For context, the elite wide forwards, the likes of Sadio Mané, Raheem Sterling, Leroy Sané and Heung-min Son, have an xG90 average north of 0.35.

This is where Costa becomes a bit of a puzzle.

On one hand, he'd be an ideal impact player and one who could change the game on a regular basis. But on the other hand, he's far from a reliable goal threat and would be something of a luxury player.

Very few teams in the world can afford to spend £50million on what many might describe as a one-dimensional winger. Unless a team is filled with goals in midfield and aren't reliant on Costa chipping in, the lack of output on his part would be hard to ignore.

The question potential clubs will be asking themselves is whether his highly impressive xA90 average makes up for him not scoring. If the answer is yes, then he should top their summer wishlist.