There has been something of a dark cloud hanging over Tottenham Hotspur this season. And it's even bringing the usually positive Mauricio Pochettino down.

“The season so far?” the Argentine posed himself the difficult question last week. “It’s strange because my feeling is the worst I’ve had in the five years that I’ve been here. But it’s the best start ever for the club in the Premier League. It’s strange, no?”

Perhaps it is, yet that underwhelmed sensation is one felt by the majority of Tottenham fans.

Is it down to disappointment over the delays to the club's new stadium? Possibly. Could part of the problem be frustration with Spurs' decision not to sign any players in the summer? Almost definitely.

The former issue should, finally, be solved in January with the club hopeful their new White Hart Lane home will be opened. The latter problem can be solved in the same month, too. But it is going to require the Spurs board to give Pochettino the money required.

Spurs squad has undoubted quality and greater depth than many believe. Yet, no matter the reality, the perception is that Tottenham have stagnated. And that has seeped into the fans, and perhaps even Pochettino's, thinking.

There is a reason the expression ‘familiarity breeds contempt' exists. It's basic human nature to find the new exciting and the old mundane. So when the winter transfer window opens, it is important Spurs buy a couple of shiny new toys for their new home.

And the latest report is that Tottenham are weighing up a bid for Watford star Abdoulaye Doucouré. The supposed cost of any deal? £35million, which in truth seems unlikely given his importance to the Hornets.

Yet even if Spurs had to pay over the odds in January – a month in which fees are naturally inflated – they should consider doing so as the French midfielder could solve two problems in one move.

Cast your mind back to the Kenyan's first season at White Hart Lane, the 2016/17 campaign. There was little Victor Wanyama couldn't do.

That season, among Premier League midfielders, he was eighth for aerial duels won, sixth for open-play key passes, fourth for successful take-ons, sixth for tackles and 11th for total passes attempted.

Last term was very different, however. He damaged knee cartilage after the second game of the campaign and was ruled out for four months.

“This has been a dark time for me,” the midfielder admitted after returning to fitness in January. “When Tottenham played Real Madrid at Wembley and I had to watch. I wanted to play so badly. It was probably the lowest point of my career.”

Wanyama was in and out of the starting XI during the second half of last season but was far from his best. The current campaign has seen his knee injury flare up once again and he's already missed five of Spurs' ten Premier League fixtures.

Understandably, and as harsh as it may sound, Tottenham can't carry Wanyama and, according to The Mirror, it's the former Southampton man they'd be wanting Doucouré to replace.

So how does he stack up? Well, it's tricky. To compare Doucouré and Wanyama this season, or last for that matter, isn't fair given the latter's injury woes. 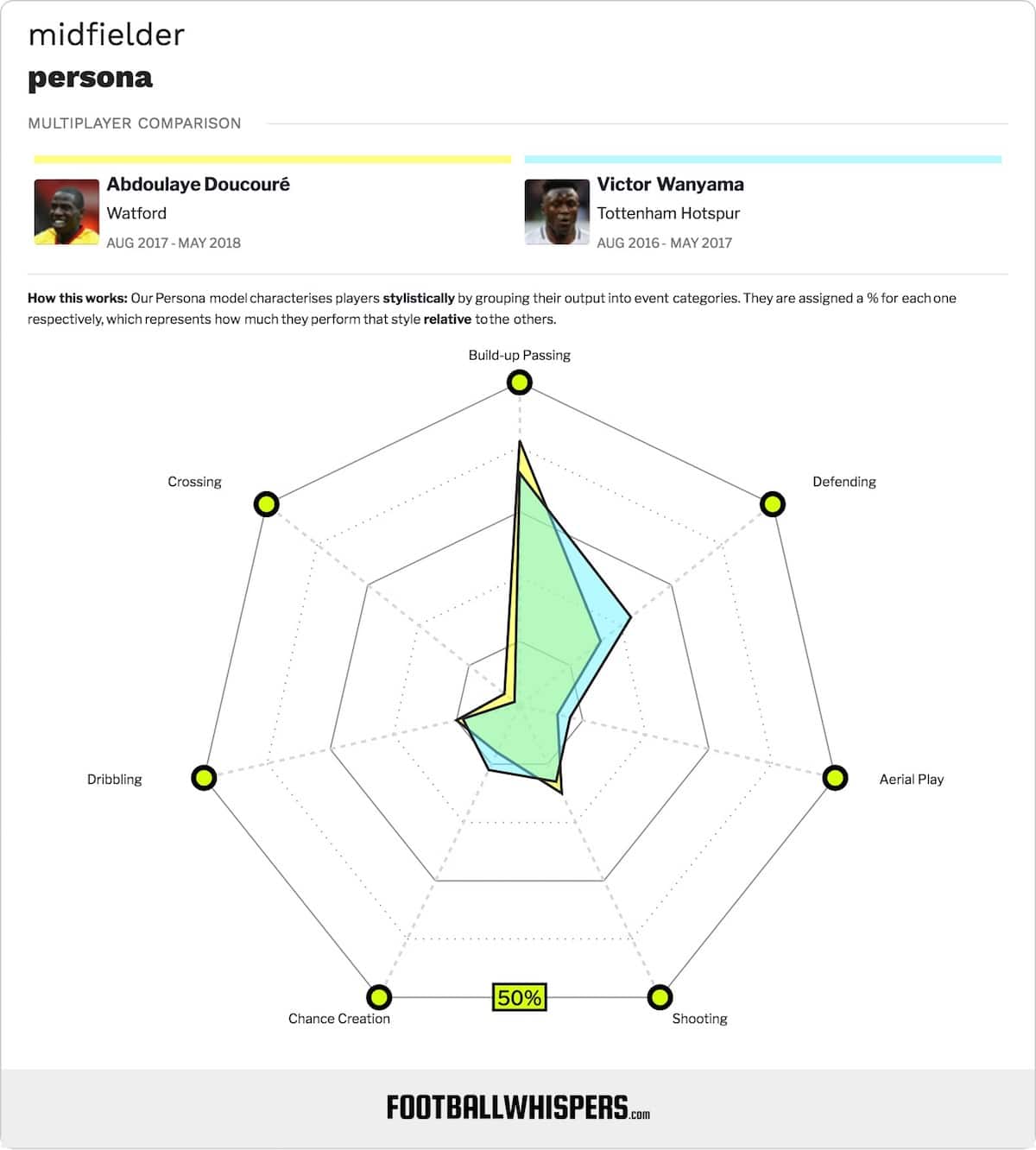 So instead we have looked at the Hornets No.16's data from the 2017/18 season and the Kenya international's from his first campaign in north London (16/17).

The Football Whispers persona comparison above shows that stylistically the two players were, in their respective seasons, surprisingly similar.

Both often played in a deeper midfield role as part of a two and while Wanyama was a little more defensively focused during the 16/17 campaign, Doucouré was more of a threat with the ball in 17/18.

The numbers bear this out, too. As shown below there is little to separate the players when they're at the top of their game. 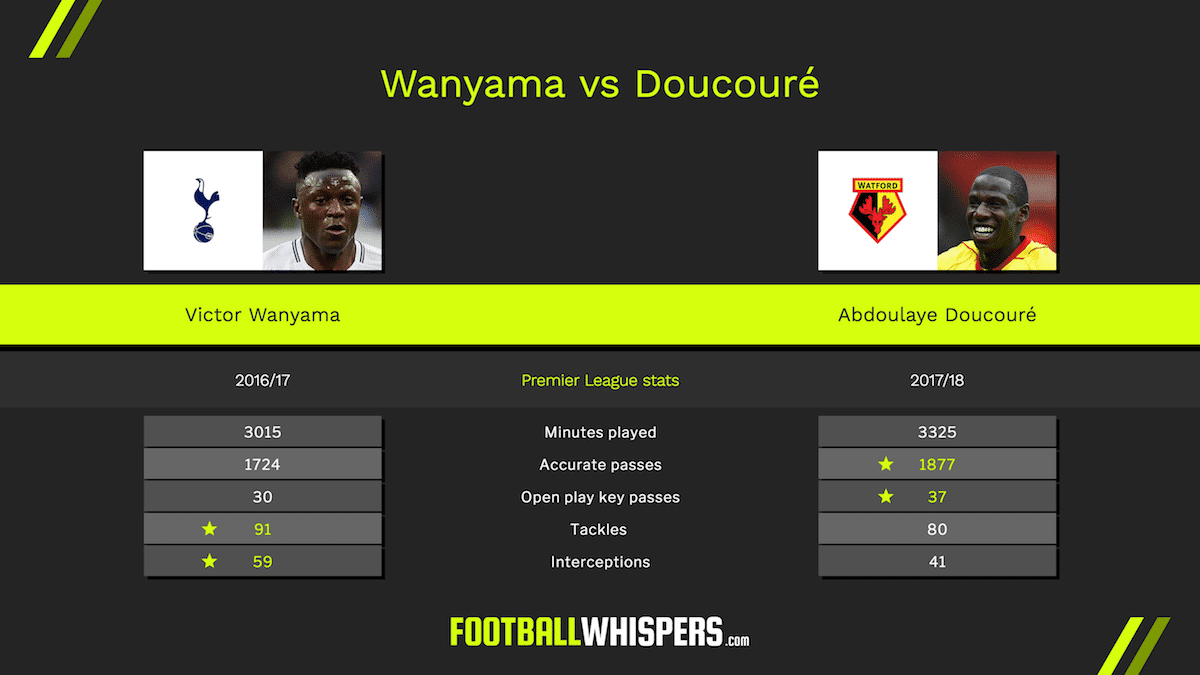 So if Spurs have identified Doucouré as the man to replace Wanyama then it's a wise choice. While he isn't as defensively diligent, his dynamism and threat in the final third makes up for that.

Yet it also presents an intriguing prospect that the French midfielder could replace another player in the Spurs midfield.

There were numerous reports at the end of last season, and over the summer, that Mousa Dembélé was ready to call time on his Tottenham career and head to China to enjoy semi-retirement. Yet a move never materialised.

He does remain, however, out of contract next summer and if Spurs are to recoup a fee for the 31-year-old then they'll have to cash in on the midfielder in January. And that would leave a gap that Doucouré could fill if required.

We will look to the 2017/18 campaign to compare both players given we're still early into the current season and their persona radars are below.

The above indicates that stylistically Dembélé and Doucouré are not worlds apart.

The Spurs star dribbles more with the ball and is more proficient in build-up passing, which isn't a huge surprise given Tottenham have more possession than Watford. But the 25-year-old Hornets man is more defensively switched on while also being a greater goal threat.

A straight look at their underlying numbers from last term would put Doucouré well ahead of Dembélé largely because he played 3,325 minutes in the Premier League compared to the Belgium international's 1,883. So instead we'll look at their per 90 numbers.

The only area Dembélé far exceeded the former France Under-21 international was in successful take-ons (3.29 to 1.10).

So if Spurs' No.19 was to depart in January, or Wanyama was to move on, then Doucouré is a logical arrival. While he isn't an exact like-for-like replacement for either, he is something of a hybrid of the two. And that may be enough to put a smile back on Pochettino's face.