For Watford fans it was inevitable; the secret could not remain so any longer. Sure enough, Abdoulaye Doucouré‘s remarkable midfield display in the Hornets' recent 4-1 thrashing of Chelsea ensured the cat was out of the bag.

Since then the rangy Frenchman has been linked with a move to one of the Premier League‘s top six on a near-daily basis. He was first mooted as a potential Tottenham transfer target.

But, earlier this week, Doucouré took matters into his own hands. Appearing on French television show Telefoot, the Hornets midfielder revealed there had been interest from Spurs, as well as Liverpool and Arsenal.

“It’s true that these clubs are interested,” he said. “But I’m at Watford for the moment and I want to finish my season well.”

But he went further when asked which of Spurs or Arsenal he would rather play for: “Arsenal, because of Arsène Wenger,” came his reply.

According to reports in The Sun, Watford are attempting to tie the 25-year-old down to a new contract after a stellar season at the heart of midfield. But with the vultures circling, Doucouré looks increasingly unlikely to be at Vicarage Road next season.

So if he does end up at the Emirates Stadium, how does he compare to the Gunners' existing midfield options? Football Whispers have run the numbers to see how he measures up. 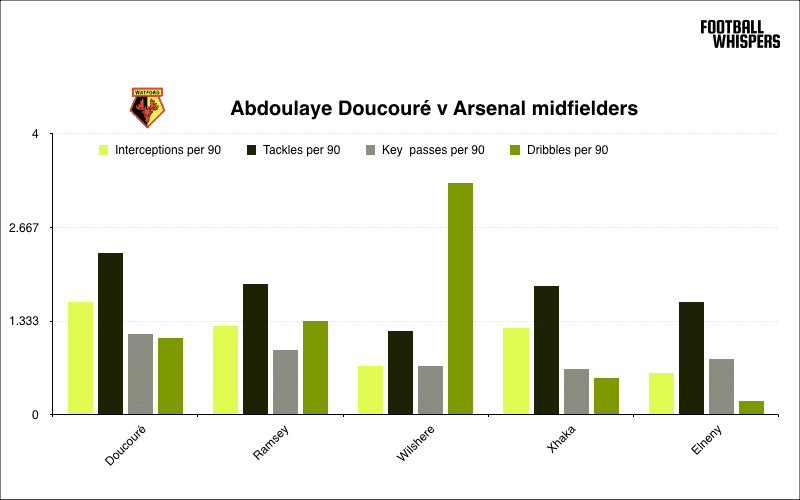 What really caught the eye in Doucouré's Chelsea display was the way he sat at the base of Watford's midfield, using his reading of the game and mobility to shuttle from side to side intercepting careless passes before getting the Hornets moving.

Unsurprisingly, therefore, he makes more interceptions per 90 (1.61) than each of Arsenal's current central midfield options. Aaron Ramsey (1.26) comes closest despite playing a more attacking role for the Gunners. The much-maligned Granit Xhaka, who has been criticised for his lack of defensive awareness, is just behind on 1.23 per 90.

Doucouré is also well ahead of his Arsenal counterparts when it comes to tackling too. With an average of 2.3 per 90, the former French Under-21 international is well ahead of Mohamed Elneny (1.6) who is the North Londoners' most effective ball winner.

Given those numbers it would be easy to pigeon-hole Doucouré purely as a destroyer; someone who wins the ball and offloads it to a more creative player. But the former Rennes midfielder has much more in his locker than simply retrieving possession for his team.

He makes 1.15 key passes per 90 – more than any Gunners player – and although his 1.1 dribbles per 90 are behind both Ramsey (1.33) and Jack Wilshere (3.3), that is down to his style of play. Doucouré's vision and range of passing mean he doesn't need to manoeuvre himself into space, he can pick it out instead.

Like every summer, this is a big window for Arsenal. The Gunners went big in January, replacing Alexis Sánchez and Theo Walcott with Henrikh Mkhitaryan and Pierre-Emerick Aubameyang.

Yet for all the excitement at the Emirates Stadium there was a sense that, once again, Wenger had neglected to strengthen an area in dire need of improvement in favour of further enhancing his forward line.

His teams of the past were built around strong, powerful presences in the middle like Patrick Vieira. If Wenger lasts beyond the summer, he would do well to revert to the transfer policy which served him so well in the past and go French.