The parallels were clear to all. As Tiémoué Bakayoko trudged off half an hour into Chelsea‘s thrashing at Watford on Monday night, Blues fans would have been forgiven for thinking their club had signed the wrong French midfielder as Abdoulaye Doucouré bossed proceedings for the hosts.

Tall, rangy, composed on the ball and displaying an extraordinary reading of the game, Doucouré drew more plaudits than any of Watford's four scorers on the night.

It did not take long for the speculation to start. Already the midfielder, who turned 25 last month, has been subject of Manchester United and Tottenham transfer rumours. The Red Devils and Spurs won't be the last top-six club linked with the Frenchman between now and the summer transfer window.

The Daily Mail claim Doucouré, who is contracted until 2020, will be offered a new deal worth around £60,000 a week to remain at Vicarage Road and ward off potential suitors in the summer. Even that might not be enough to keep the man of the moment in WD18.

And yet it almost didn't happen for Doucouré in English football. Signed in the 2015 January window from Rennes for £8million, he was loaned to Granada – who then shared the Pozzo family as owners with Watford – for the second half of the season.

Ahead of the 2016/17 campaign he returned to Watford's London Colney training HQ to compete for a place in Walter Mazzarri's side. The Italian coach did not fancy Doucouré and he was very nearly loaned to French side Lorient at the end of the 2016 summer window.

Thankfully for Watford the deal was completed 33 seconds too late and Doucouré remained at Vicarage Road; unwanted and unused, save for six minutes against Chelsea on the second weekend of the season. His future appeared to lie elsewhere.

He got his head down and worked hard in training, determined to prove Mazzarri wrong. Luckily, Doucouré has always been patient. It comes from his upbringing in Meulan-en-Yvelines in the north of France.

“I’ve never given up on anything and I’ve always known how to be patient,” he told The Guardian in November. “Being the second-youngest of eight children has helped. You get used to waiting your turn even if it’s just to have a go on the PlayStation. And you have to make sure you’re ready to take it when it comes. It’s the same in football.”

On New Year's Day 2017, a full 11 months after he put pen-to-paper on his Watford contract, Doucouré was handed his first Premier League start. A 4-1 home defeat to Tottenham was an inauspicious way to do it, but with midfield options at a premium amid a growing casualty list, he kept his place for Hornets' next game, at Stoke City.

A visit to the Potteries, ideally on a cold winter night, is the barometer against which all foreign imports are measured, as the cliché goes. Doucouré passed with flying colours.

“He played very good, great actually,” the surly Mazzarri admitted afterwards. “There are things he needs to improve, like his shooting – he needs to score more – but he’s got a big future in front of him.”

Despite that glowing reference he was still a bit-part player until the final two months of the season. The Hornets limped to safety in 17th, losing their final six fixtures, but the emergence of Doucouré was a silver lining at the end of a tough campaign.

By the time Marco Silva replaced Mazzarri there was no question he would be part of the Portuguese's plans. “He told me straight away that he expected me to be a very important player in his system,” Doucouré said in the same interview with The Guardian.

Silva, for all his faults prior to his sacking last month, was true to his word and made Doucouré the lynchpin of his midfield with the rejuvenated Tom Cleverley and Nathaniel Chalobah – who he played against for France at the Under-17 European Championships in 2010 – either side of him.

Both have suffered injuries this season, leaving Doucouré to man the fort alone. He has not flinched, not once.

So what makes him so good?

For one thing, his anticipation and reading of the game are exceptional. His ability to position himself to intercept the ball and pick off loose passes is incredible.

Against Chelsea he led Watford for interceptions (three) and was second only to countryman Étienne Capoue for tackles (seven).

In the images below, taken from that remarkable win over Chelsea, Doucouré displays all of his awareness and ability to sniff out danger, getting in front of Eden Hazard (10) to intercept Victor Moses' pass inside. 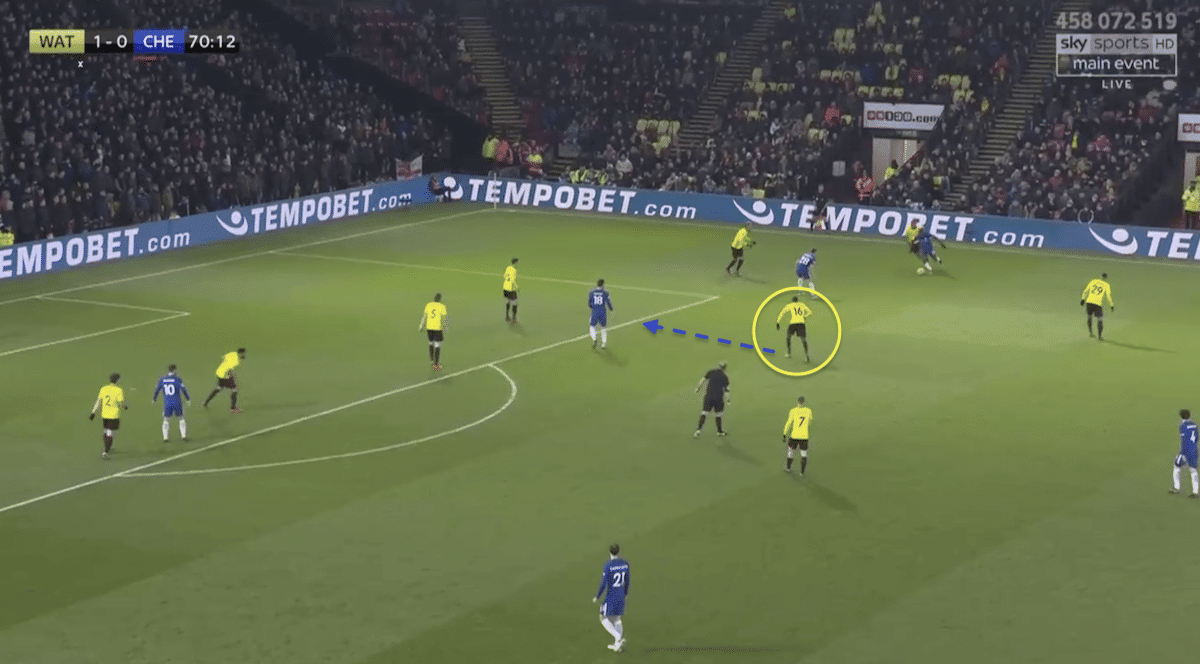 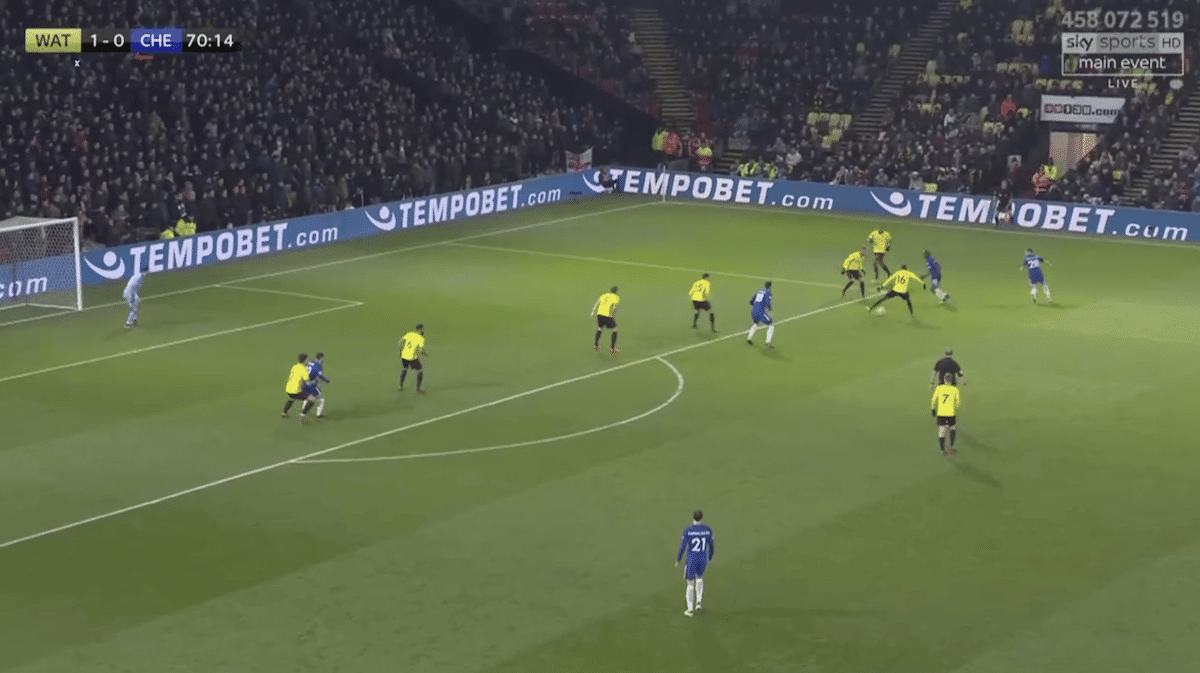 Of Watford's midfielders, only Capoue (2.2) averages more interceptions per 90 than Doucouré (1.5).

On the other side of the ball Doucouré is equally important to Watford. More often than not he is the deepest member of the Hornets' midfield and that allows him to pick possession up off the defence and play forward.

Doucouré has an impressive range of passing and is averaging 62.9 passes per 90 in the Premier League this season. No one at Vicarage Road attempts more – Capoue is second on 54.1. In terms of the Premier League, Doucouré is eighth among his central midfield peers (players who've made fewer than ten outings excluded).

That's not to say he is merely someone who plays simple passes to more inventive players. He showed his vision and threat in the final third against the Blues by supplying the assist for Roberto Pereyra to score Watford's fourth.

The Argentine drove between the hapless Gary Cahill and César Azpilicueta to latch onto the pass from Doucouré (circled) who slid the ball in behind David Luiz. 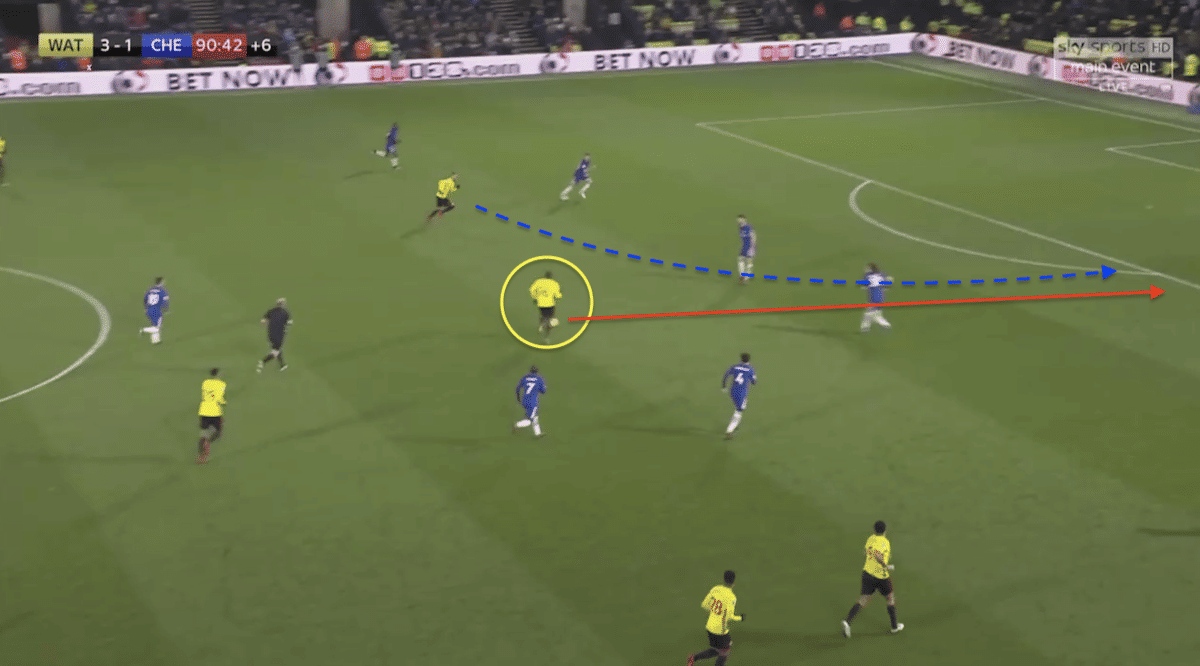 And to cap it all off, he is Watford's top scorer this season with seven goals. Several of them, most notably his consolation effort against Huddersfield Town, lashed home from 20 yards after a single bounce, have been corking efforts.

Doucouré's turnaround at Watford owes a lot to luck. Were it not for the paperwork on his loan switch to Lorient being registered 33 seconds past the cut-off point, he would probably not be the desire of the Premier League's big boys. But it owes far more to his commitment, desire and willingness to prove his worth after being, wrongly, written off.

The Pozzo model allows for plenty of collateral among the rough diamonds who are polished up and sold on for big money. Doucouré will undoubtedly fall into the second category.