Top free betting tips and odds for Furth vs Dortmund

Borussia Dortmund focuses to find their lost winning track when they make a visit to Greuther Furth in the next Bundesliga engagement. Cloverleaves also follow a long streak of winless games.

Borussia Dortmund to shine in Furth

Greuther Furth has alternatives of defeats and draws in the last five games and are yet to win a league duel from the recent ten attempts. In the opposition, Dortmund are also out of form and lost three outings in a row ahead of this game. Nevertheless, the BVB are undefeated against Cloverleaves and won three of the last five. Furth also lost the previous two home attempts consecutively. So we back the Black and Yellows to find a victory against the relegation-threatened Furth.

Goals at both ends of Sportpark Ronhof Thomas Sommer

Furth should continue their scoring momentum as the BVB are leaking goals from the last three games consistently. Cloverleaves also found the back of the net in three of the last four H2Hs against the upcoming rivals. On the contrary, the BVB have a long sequence of scoring in all of the games of 2022. So we will be waiting for both teams to get on the scoresheet in this game.

Furth vs Dortmund: Check out the best odds and the latest stats

Furth vs Dortmund: Check out the team lineups

Cloverleaves are still buried at the bottom of the table, having only three wins in the 32 rounds of this season. Greuther Furth managed to restrict Union Berlin to a 1-1 draw in the last game away from home. Six players of the team are on the injury list while Jetro Willems will be out of the game due to yellow card suspension.

The Black and Yellows faced the consecutive second disappointment of Bundesliga previously in a thrilling game against VfL Bochum. But the team is still second on the table with a lead of eight points from the third. The club gaffer Marco Rose will miss ten players of the team due to fitness issues.

Questions About Furth vs Dortmund 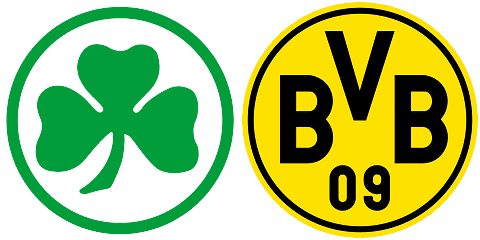 Who won the last h2h? 3-0 in favour of Borussia Dortmund.

Where is the game being televised? Arena 4, beIN Sport (Fra), Sky Bundesliga, and Viaplay.