The game that will kickstart the new season of Champions League is the Dortmund vs Copenhagen duel scheduled for Tuesday, September 6th. With that in mind, we have prepared a preview of the game for you, along with free betting tips.

If you are not sure what is the best bet for Dortmund vs Copenhagen, check our top betting predictions for this game:

Dortmund to Win at Half Time and Full Time

With all due respect to Copenhagen, who had to eliminate Trabzonspor to reach the group stages, they are the clear outsiders in this game, especially since Dortmund has been in great form and are currently sharing the top spot in Bundesliga.

On top of that, Dortmund is clearly the better team and they will host the game, so we expect them to win this match and be convincing about it. So, our first prediction is for Dortmund to win after leading at half time.

Both of these teams are known for playing high-scoring games and while we expect the home team to win the game, we can see both teams scoring a goal in this match.

After all, Copenhagen has the quality to put one past Dortmund, especially with the German team pushing to score as they are the favourites, which will leave a lot of room for the guests on counter-attacks.

If you want to check top odds and stats for Dortmund vs Copenhagen, you've come to the right place:

The first game is always important in Champions League group stages, so let's take a closer look at both teams ahead of their duel:

With four wins and one loss in the first five rounds of German Bundesliga, Dortmund is currently sitting at the top of the standings alongside Freiburg, with Bayern Munich one point behind them. Even that one loss so far came in a shocking manner against Werder Bremen in a match in which Dortmund led until stoppage time. All in all, the team is clearly in good form.

However, Dortmund is also dealing with many injuries at the moment, with seven players on their injury list right now. The latest addition to the list is Jamie Bynoe-Gittens, so their manager will have to mix things a bit once again.

Reaching group stages of Champions League through Qualifiers is already a big result for Copenhagen, but the team will give their best to at least finish third and continue their journey in Europa League. That being said, Copenhagen hasn't been in such a great form in Danish league so far since they have four wins and four losses this season and they are sitting in the sixth place in the standings right now.

When it comes to team news, 16-year-old Roony Bardghji, along with Kamil Grabara, are still recovering from injuries and will likely miss this game. Also, Khouma Babacar and Peter Ankersen are likely out as well. 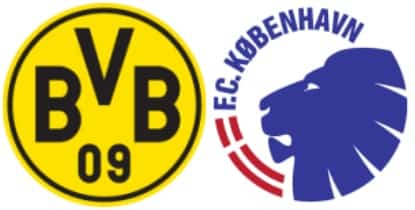