Top free betting tips and odds for Dortmund vs Bielefeld

Borussia Dortmund goes for a home attempt to clear-cut their lead of the points table against Arminia Bielefeld. The Blues make the appearance on the back of the consecutive two defeats.

The BVB have scored in all of the last five meetings against the Blues, having a flow of scoring in all of the recent games as well. But the visitors are not making enough efforts who scored only once in three of the last four outings. Arminia were also unable to score in five of the last six duels against Dortmund. Given all, we expect the hosts to hold a strong defence once again against their rivals and take the victory with the clean sheet.

Dortmund vs Bielefeld: Check out the best odds and the latest stats

Dortmund vs Bielefeld: Check out the team lineups

The Black and Yellows would be disappointed for dropping two points against the fourteenth-positioned team Augsburg. But the BVB have made enough results to get second place with the lead of five points and one match in hand. the manager Marco Rose will report a number of unavailable names as nine players are having fitness concerns.

The Blues lost their third game out of the recent four league games previously Augsburg. Arminia Bielefeld jotted down only five wins in this season so far and have a long run of defeats and draws to get them fifteenth on the points table. The club boss Frank Kremer has a complete squad available for the upcoming game.

Questions About Dortmund vs Bielefeld 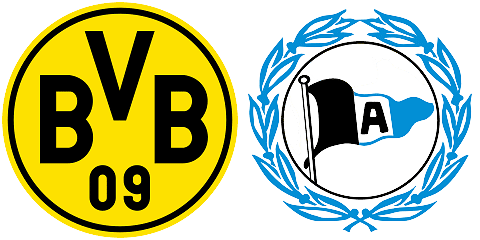 Who won the last h2h? 1-3 in favour of Borussia Dortmund.

Where is the game being televised? BeIN Sport Connect, DAZN Deutsch, and Sky Sports Mix (UK/Irl).