Borussia Dortmund continued their winning run in the UEFA Champions League with a 1-0 win over Sporting Lisbon. They host Augsburg at the Signal Iduna Park to get over their defeat by a similar margin to Borussia Monchengladbach last weekend.

Here are our predictions for Dortmund vs Augsburg.

With Bayern Munich racking up wins in succession, Borussia Dortmund and the chasing pack do not have time to lick their wounds. The expectations will be clear for Marco Rose and he will want his charges to claim the three points on offer. After playing in midweek for the third week in succession, fatigue would have crept up in his charges and the plan for Der BVB will be to claim the lead early. We expect them to ensure this given Augsburg's poor defensive record, which ironically is one-goal better than them.

After seeing eight successive fixtures conclude with Over 2.5 total goals, Borussia Dortmund has seen 1-0 scorelines, one in favour and one against, in their last two outings. With fatigue catching up with them for playing week in and week out, and nine players out of contention, we expect goals to flow once again in their meeting with Augsburg.

The Fuggerstädters defence is an especially porous one with 11 goals conceded and Marco Rose will have found plenty of ways to exploit their backline. The former Borussia Monchengladbach manager will be keen on addressing his side's defensive ailments as well with 12 conceded, the fourth-highest in the Bundesliga. Given their defensive issues of both sides, we expect goals to flow at either end of Signal Iduna Park.

Dortmund vs Augsburg: Check out the best odds and the latest stats

Marco Rose failed to get one-up his old side last weekend as Der BVB suffered their second defeat of the campaign at Borussia Park. They bounced back with a lumbered 1-0 win over Sporting Lisbon but with nine players unavailable for selection, will have to dig deep for a result. Despite their misfortunes, Donyell Malen's form in Borussia Dortmund colours is a sign of good things to come from the Dutch forward.

Augsburg come into this fixture on the back of a 3-0 hammering by Freiburg last weekend. Nevertheless, Markus Weinzierl will be eager to pit his wits against Borussia Dortmund. He managed to do what Marco Rose couldn't, i.e beat Borussia Monchengladbach. However, even the most ardent of Augsburg supporters will not fancy a three-point result for their team given their tally of just two goals from six Bundesliga fixtures.

Questions About Dortmund vs Augsburg 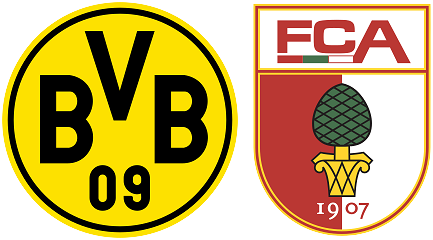 Who is the player to watch out? Erling Haaland.