Borussia Dortmund have wasted no time in the transfer market this summer. With Christian Pulisic agreeing to join Chelsea back in January, the Bundesliga runners-up had money to spend. And as soon as the domestic league was finished, they went about doing just that.

Three huge transfers, players who impact the starting XI, for the price of one squad player and a bit of loose change thrown in. Brilliant business by Michael Zorc and the rest of the recruitment team at the Westfalenstadion.

But these signings suggest a number of players could well be on the way out, with Lucien Favre’s squad now looking a little stocked in certain areas. Could an exodus be on the cards?

Here, we take a look at five players who could well be sacrificed this summer, with BVB keen to assemble a squad who can take the Bundesliga title off of Bayern Munich. 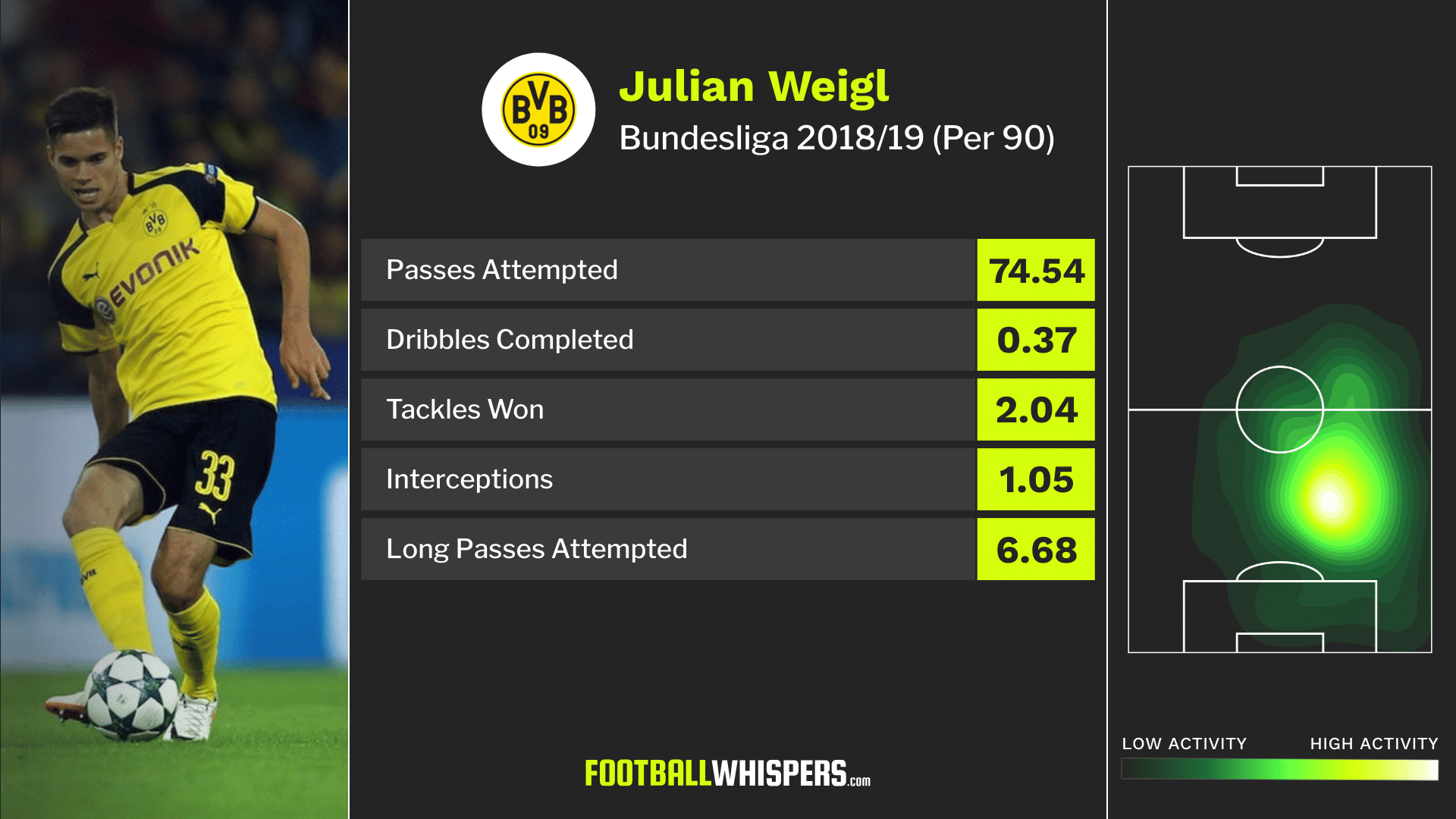 At one point, Weigl was the midfielder every top club across Europe wanted. Pep Guardiola reportedly wanted to bring him to England with him when he left Bayern Munich in the summer of 2016. While Paris Saint-Germain and Manchester United both had a strong interest in the German maestro.

However, injury curtailed his progress. Not only did the links to Europe's elite cease, Weigl lost his place in Dortmund's starting XI with Favre bringing in Thomas Delaney and Axel Witsel.

The arrivals of Brandt and Hazard further complicate things for the Germany international. If Dortmund switch to a 4-3-3 system and away from the 4-2-3-1 used last season, then both of the new signings can operate in that middle third. Further limiting Weigl's opportunities.

He's too good to be a squad player, the 23-year-old might be best leaving to get his career back on track elsewhere and City are still in the market for a replacement for Fernandinho. 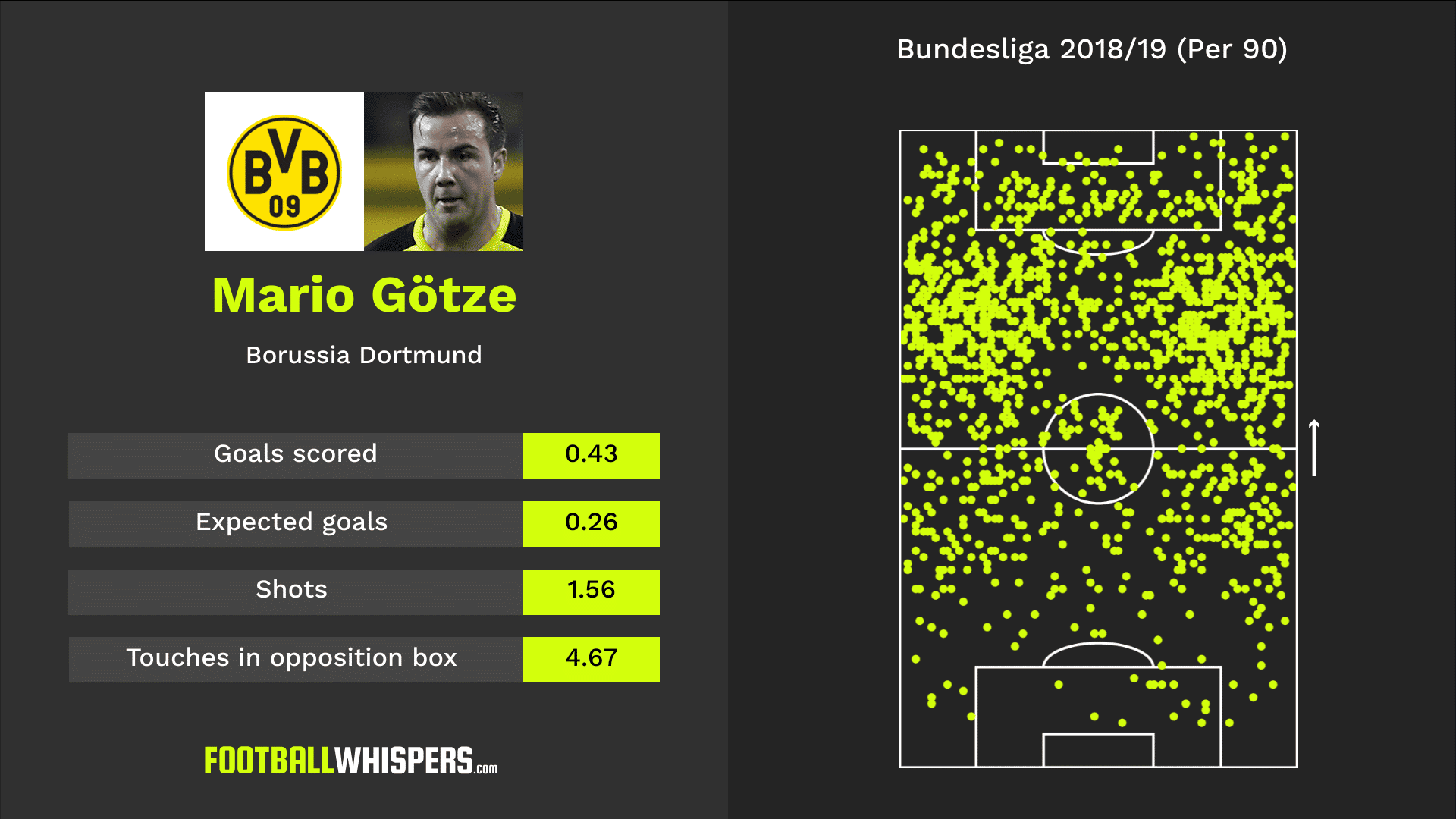 The World Cup winner did a job for Favre during the 2018/19 season as a false-nine, but with Paco Alcácer expected to be up to speed for the new campaign and the arrivals of Hazard and Brandt, the attacking options are now starting to swell.

Still only 26, perhaps Götze has one big move left in him. He still has something to offer. Even while sacrificing himself for the good of the team last year he still managed an impressive 0.43 goals per 90.

Many might view him as a risk, but he could well be a gamble worth taking. He's a potential bargain, a game-changer and a difference-maker on his day.

Once heralded as a future midfield star, the one-time Liverpool transfer target has seen his career stall since the switch to the Westfalenstadion in 2017. He was limited to just 18 starts in all competitions last season. With increased competition, it's hard to see how that number increases during the 2019/20 campaign. 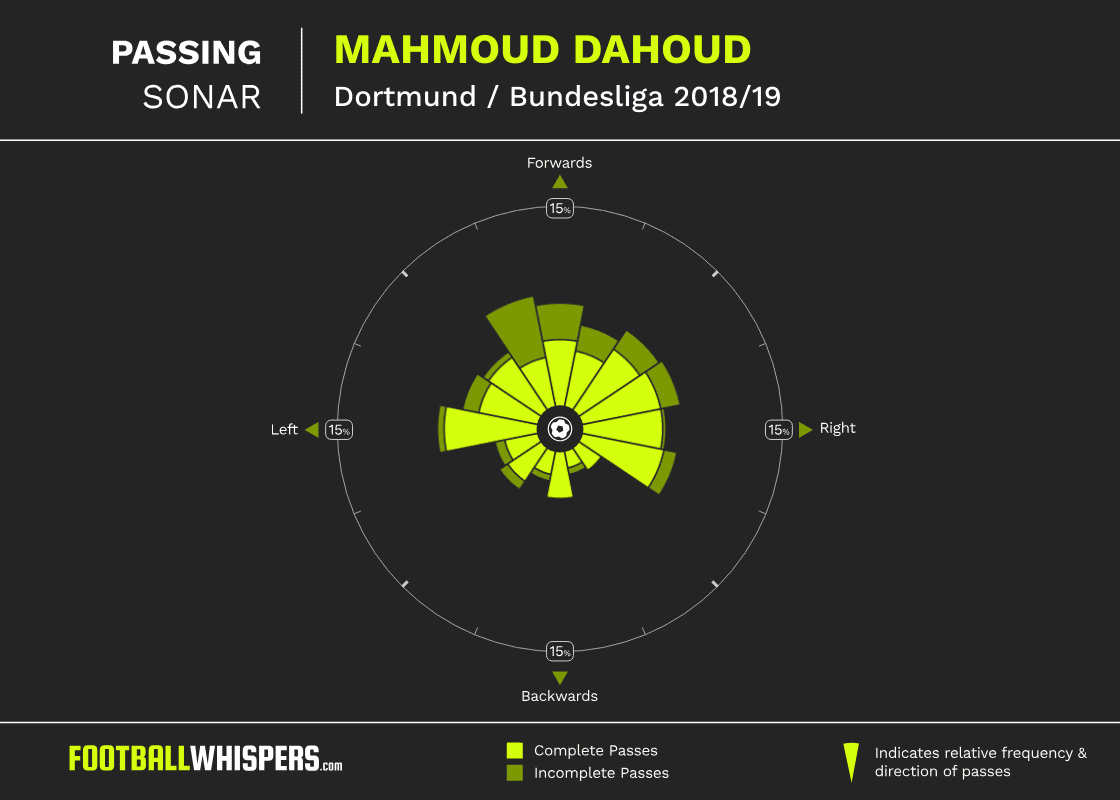 He'll be in direct competition with Weigl to be the next midfielder up behind Witsel and Delaney. With the former 1860 Munich man deemed to have a higher ceiling, BVB may prefer to sell Dahoud.

Capable of playing a number of midfield roles, he should be a shrewd signing for a host of teams. At 23 there's still potential for him to improve but he'd arrive already at a good level with European experience under his belt. He would be a solid, if not spectacular, signing.

Unlike others named on this list, it's hard to see the versatile Portugal international deemed surplus to requirements. He could be sold, however, if the club want to make a profit.

With Schulz now signed, BVB have the German national team left-back at their disposal. It's hard to see him agreeing to join if he wasn't given some assurances over playing time.

With other clubs in the hunt for a left-sided full-back this summer, BVB could triple the €12million they spent to sign him from Lorient in 2016. Barcelona, Manchester City and Spurs have all been linked in the past.

The least known name on the list but perhaps the one who represents the biggest bargain. The 25-year-old was signed from Freiburg in the summer of 2017 for around the €20million mark.

Injuries have had an impact on his Dortmund career and he's often forgotten about when discussing the options Favre has.

If BVB could recoup what they paid for him then it's likely they'll cash in. With greater depth in wide areas now, there's no need to hold on to an asset they could make money on.

Philipp could do a job for a number of clubs looking for a goalscoring wide forward. In his final season with Freiburg he netted nine Bundesliga goals and he repeated the trick with BVB during his debut campaign with the club. Before injury, the Berlin-born attacker had 26 goals in 76 games.