The gulf between Celtic and Rangers last season – 39 points to be exact – was so vast that it left the latter no choice but to make significant changes in personnel during the summer transfer window.

They included Graham Dorrans, the lifelong Rangers fan who was finally given the opportunity to represent his boyhood club when Norwich City accepted a £1.35million bid from the Glasgow outfit.

While they had signed relatively unknown quantities in the shape of Eduardo Herrera, Carlos Peña and Alfredo Morelos, there was a clear idea as to what to expect from Dorrans' arrival.

The 30-year-old forged a respectable career for himself in England with West Bromwich Albion and Norwich, that included an 18-goal haul to help the Baggies earn promotion to the Premier League at the end of the 2009/10 season.

He earned himself a reputation as a combative and consistent presence in the middle of the park, while his impressive performances in the Championship drew flattering comparisons to Bryan Robson.

Dorrans' bite and energy in midfield was something Rangers sorely lacked last season, so when the club finally landed their man after a protracted summer saga, there was a sense of anticipation that they had acquired the services of a box-to-box midfielder with genuine pedigree.

While some of the Rangers' summer recruits have struggled to adapt to Scottish football, Dorrans has wasted no time adding edge and invention to the midfield. He has started all eight matches in the league and has only missed 18 minutes of the campaign so far. Ever-present at the heart of Rangers' midfield, Dorrans has immediately earned the trust of his manager.

Dorrans has already shown what he can offer going forward, scoring four goals and adding two assists. Only Morelos, the impressive Colombian forward, has scored more with six.

Operating alongside fellow summer recruit Ryan Jack in central midfield as part of Caixinha's preferred 4-4-2 system, Dorrans has been key for the Gers already.

One of the main takeaways from Dorrans' start with Rangers is how he opens up defences with incisive passing. Rangers lacked creativity from deeper positions last season but, in Dorrans, they have found a midfielder comfortable in possession and with the vision to pick out runs in behind.

For example, in Rangers' recent 4-1 win over Hamilton Academical, Dorrans dictated the tempo and flow of his side's passing game. An excellent example of his vision and passing range can be seen below.

First, Dorrans has the presence of mind to take a touch into space, away from the pressing opponent. 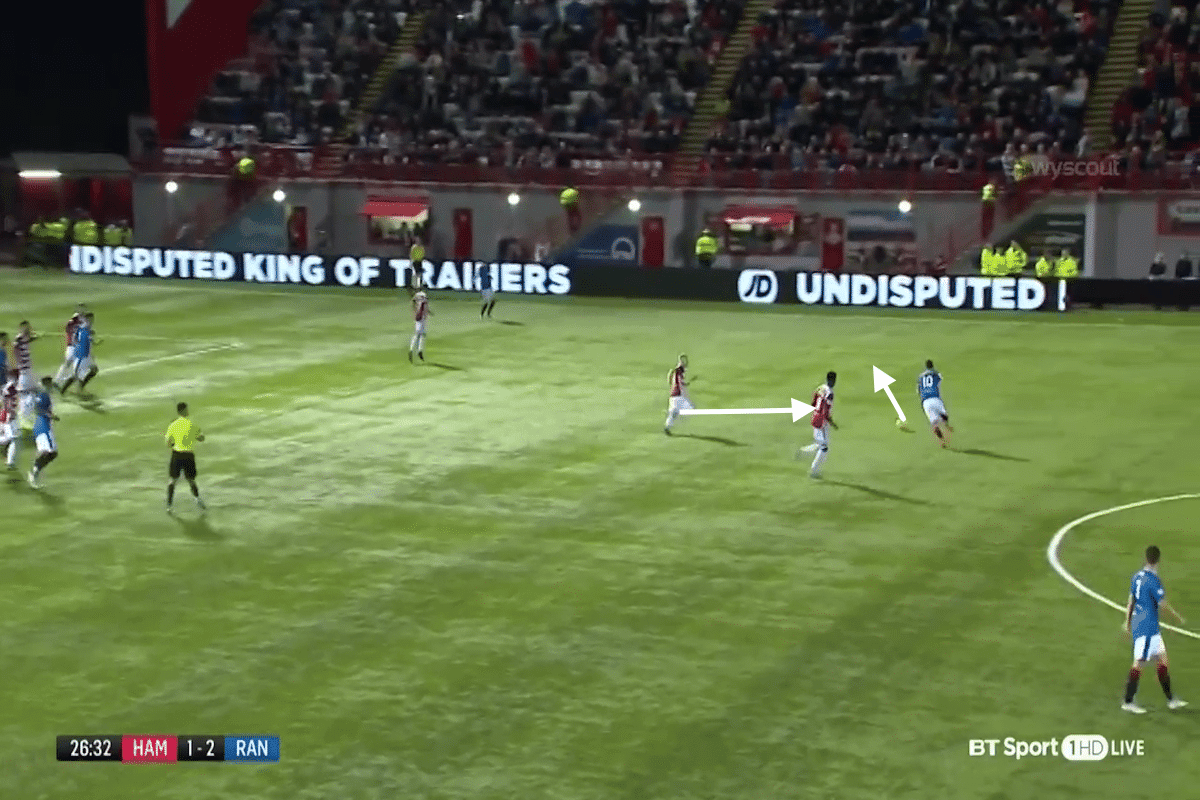 It gives him that yard of space to look up and spot the run of Daniel Candeias. 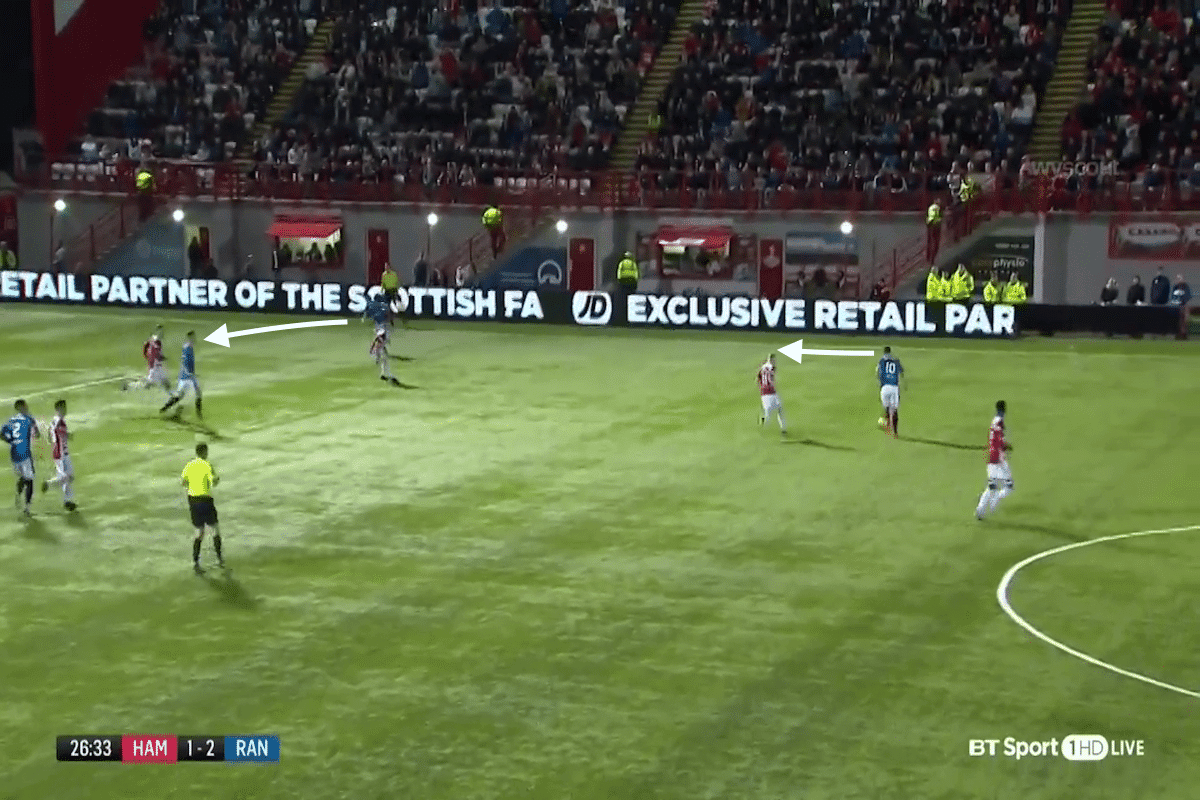 However, not only does he have the vision to see the right-back's movement, Dorrans dinks a perfectly-weighted ball over the sea of bodies in front of him. Candeias charges into space and fires the ball into the far corner. With Rangers 2-1 up, it was Dorrans' ingenuity in the middle that prised open Hamilton's defence and practically ended the game as a contest. 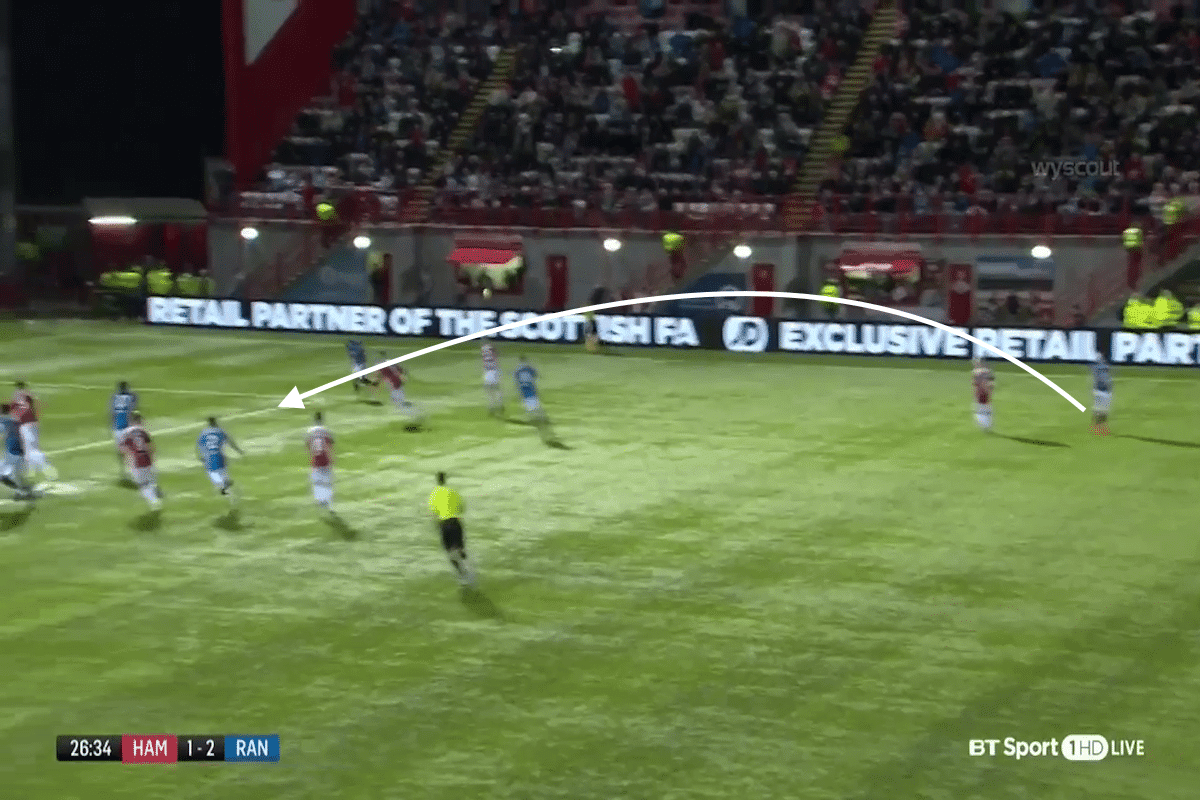 His four goals have not gone unnoticed either. While his composure from the penalty spot is well-documented, Dorrans does score some classic ‘midfielder goals.' On his debut against Motherwell, he opened the scoring in just the fourth minute after taking up an excellent position from which to pounce.

As you can see below, Dorrans senses the possibility of a chance when the ball is floated to Kenny Miller at the far post. Miller spots him moving inside the box and nods it down to him for the finish. It's exactly that kind of intuition and initiative that Caixinha will be delighted with. 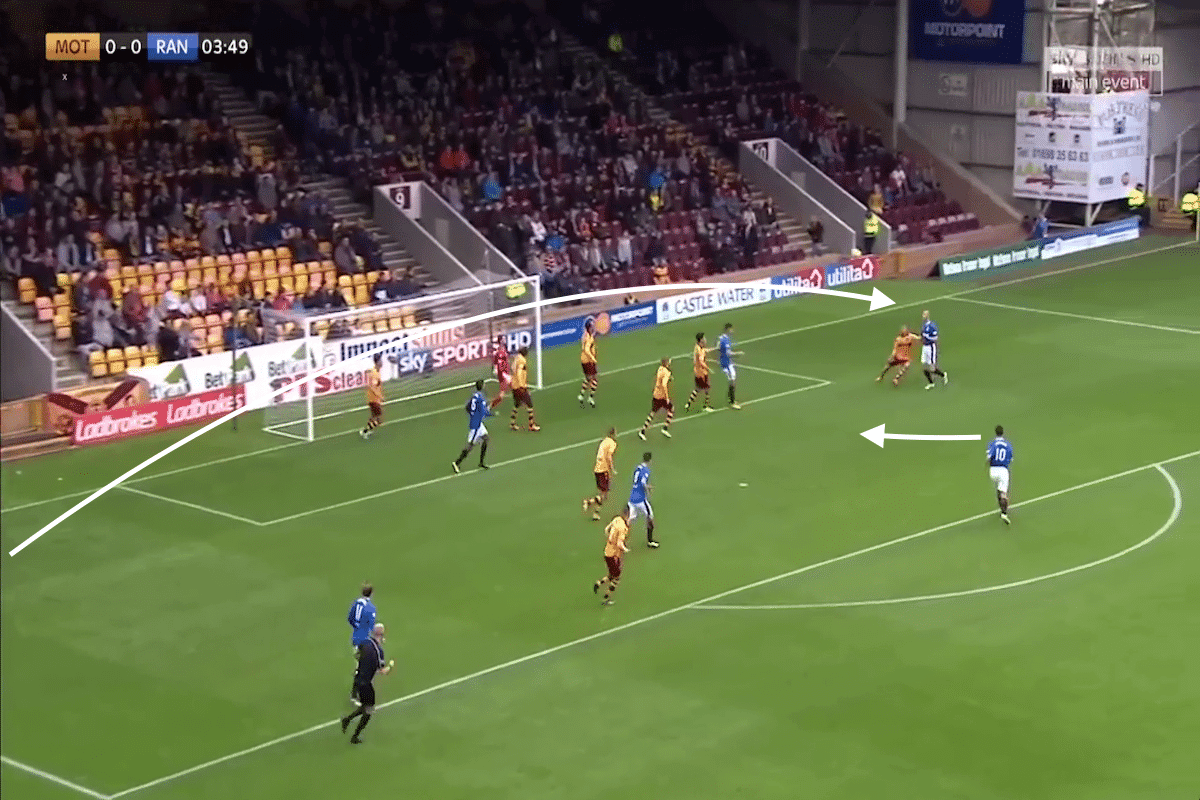 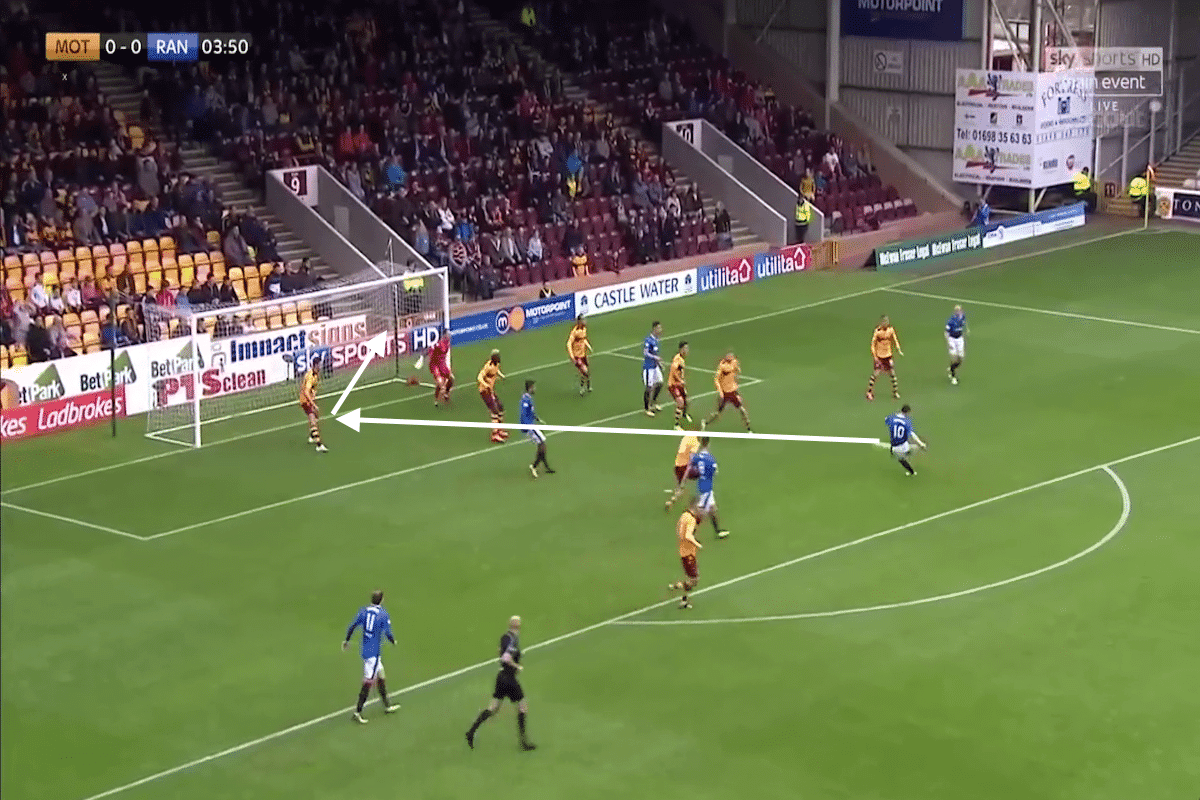 Dorrans has delivered right when Rangers have needed him, too, including a late equaliser away to Partick Thistle. With time ticking away, Dorrans assessed his options and, with minimal movement ahead of him, decided to take the defender on and curl an unstoppable shot into the top corner. Once again, it's this impact and quality in the final third that has made him such a hit already with Rangers this season. 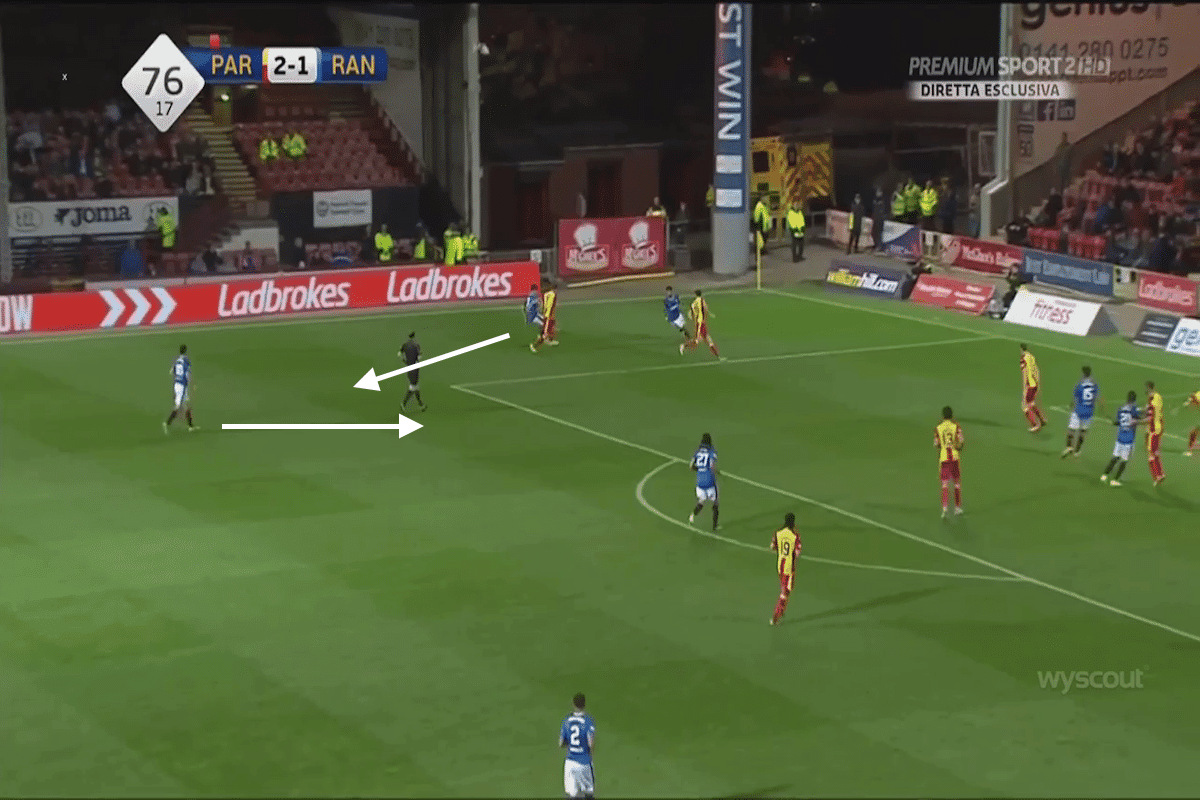 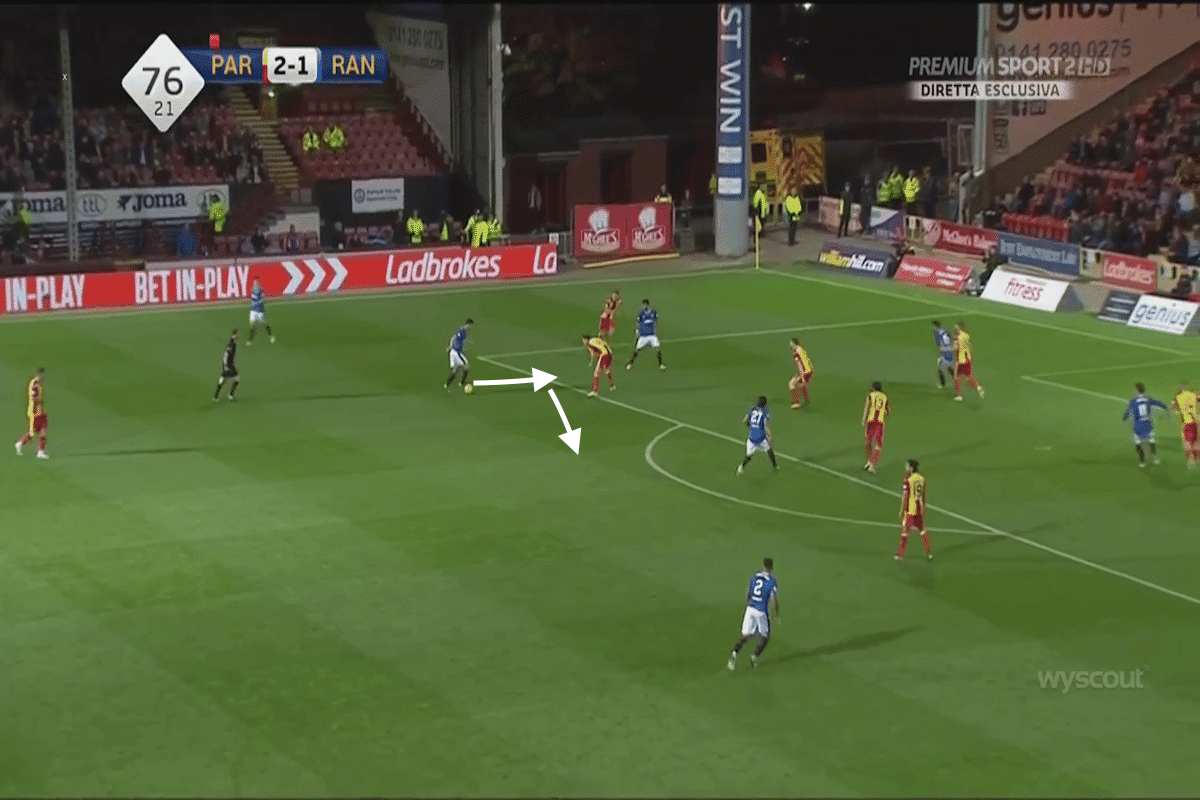 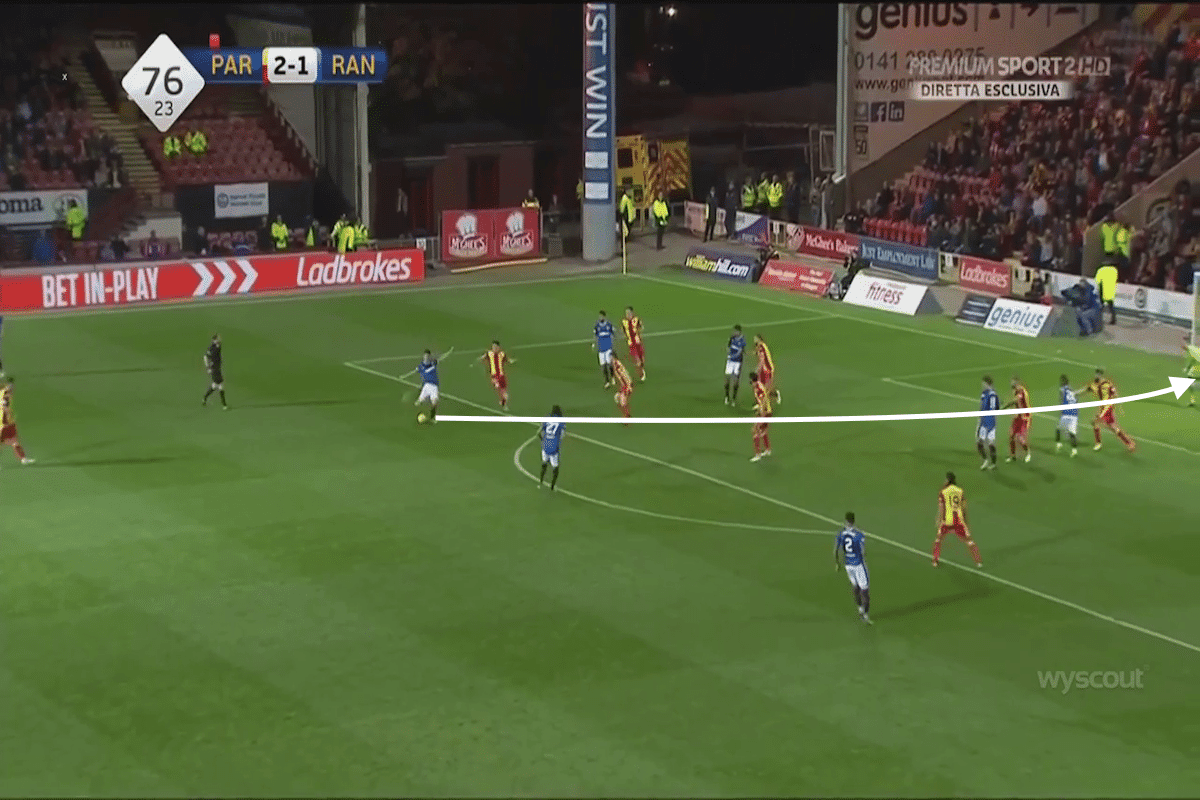 The former Canary has the ability to score and create goals, but a recurring complaint from Rangers supporters is that he will shine in fits and starts, yet hasn't been as consistent as he was back in his West Brom heyday.

In fact, the stats show that Dorrans does not heavily influence the game in the final third. The Scotland international is averaging very low in the key passes, expected assists and establishing passes categories, which suggests that, because he has four goals and two assists to his name, his overall contribution beyond that has been lacking.

The purple graphic below is Dorrans' stats, while the blue one below that is Candeias. 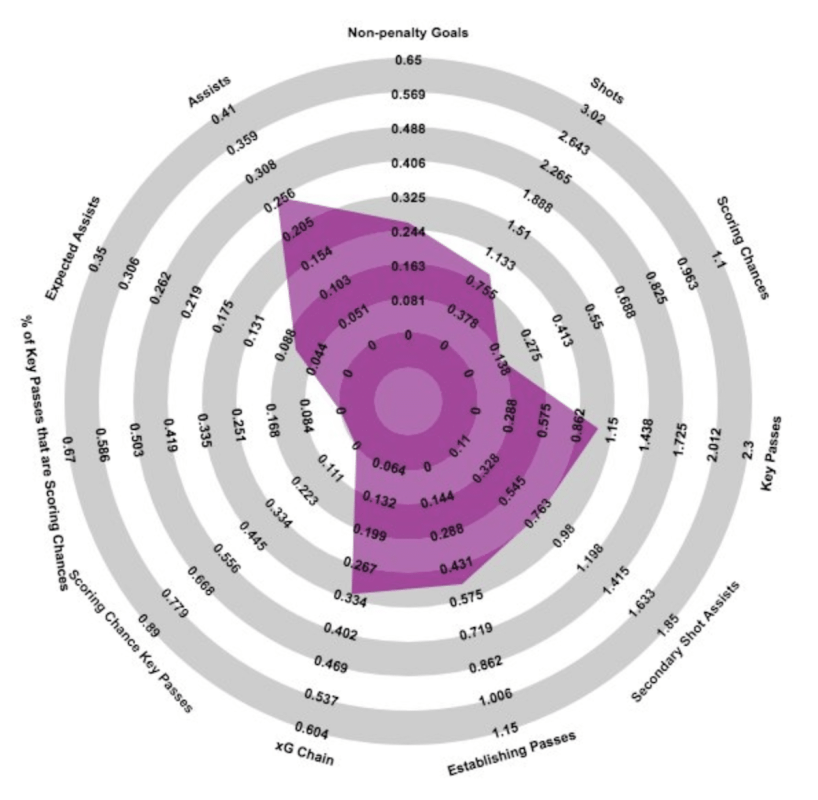 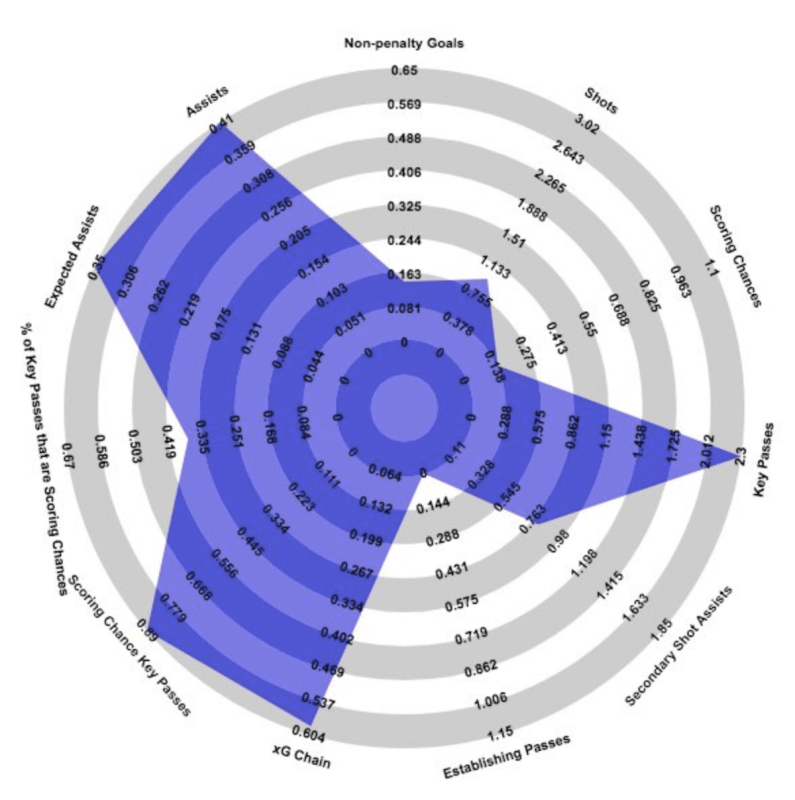 Caixinha plays a 4-4-2 and instructs the full-backs – usually Declan John and James Tavernier – to push up high to support the attacks, forcing Dorrans and Jack to drop deeper in midfield.

With Dorrans dropping too deep at times, particularly when Rangers found themselves under constant pressure against Celtic, his attacking threat is neutralised and leaves some fans questioning his impact.

However, with the quality that he has shown in both finishing and passing, there is no doubting that Dorrans has it in him to be a real creative force for Caixinha.

If the experienced midfielder can find a bit more confidence and perhaps play in a system that enables him to take up a more advanced base position, he could have a real say in Rangers' fortunes this season.