Arsenal have made quite the habit in recent seasons of letting young players leave the Emirates and then soon regretting it.

Not content with losing Serge Gnabry, now starring for Bayern Munich, the Gunners parted ways with Donyell Malen just twelve months later. The Premier League side pocketed around the £5.5million for the pair.

Two years on from selling the latter to PSV, Arsenal are believed to be interested in bringing Malen back to North London.

They aren’t the only side keen on the 20-year-old, the Daily Mirror claim Liverpool are keeping tabs on the electric Netherlands international after his explosive start to the new season.

Malen already has seven Eredivise goals to his name, he’s also off the mark in the Europa League and scored on his debut for the national side in a 4-2 win over Germany.

He struck the opener in the 3-2 win over Sporting Lisbon and netted the equaliser as the hosts claimed a point against rivals Ajax.

His five-goal showing against joint leaders Vitesse meant Malen was the first PSV players to score five or more in a single Eredivisie game since Lambertus Theunissen in 1964.

As far as breakout seasons go, Malen’s couldn’t have gone any better.

The 20-year-old netted ten times last term but he was used mainly as a substitute. However, a number of sales at the Philips Stadion meant the one-time Ajax youngster was handed the No.9 jersey and a place in Mark van Bommel’s starting XI.

Spearheading a front three made up of summer signing Bruma and the highly-rated Steven Bergwijn, Malen’s form is hard to ignore and reports suggest a host of top European clubs are watching his development.

A £50million valuation should see teams hold off on moving for him in the short-term – such an outlay for a player with just 12 Eredivisie starts would be negligent – but if he continues to deliver, that might soon become a bargain fee.

Malen appears to be the real deal and his output should be sustainable. 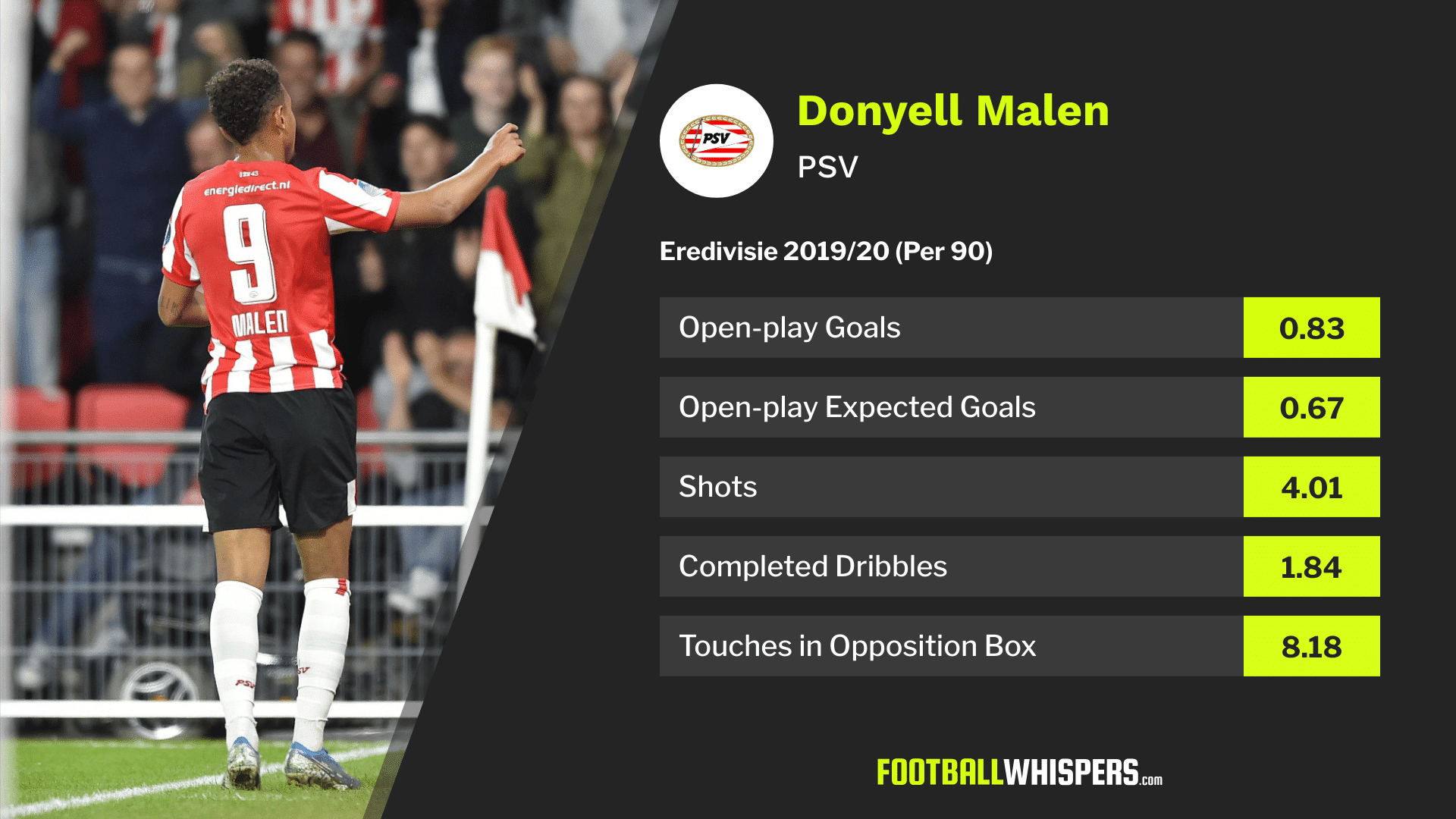 He is a blank canvas. Deployed as a centre-forward, Malen has all the traits of a modern-day wide forward. He could find a home there eventually and still be as productive as he has been this season.

He's got movement, intelligence, and finishing ability; similar in many ways to Raheem Sterling, Mohamed Salah and Sadio Mané.

Malen will often start centrally but drift wide to find pockets of space. He is eager to isolate full-backs before breezing past them and casually stroking home a right-footed effort. There's a Thierry Henry-esque quality to his finishes and the Frenchman has definitely influenced the young Dutch forward.

Henry was an assistant coach with the Arsenal Under-18s when Malen was with the Gunners and the PSV star has spoken about the World Cup winner joining in during training sessions.

“If he participated in the rondo you immediately saw that this man can play. And he gave tips that really made sense. Then I tried it and felt, ‘Hey, it works!'”

Malen has a blend of skills which seems him share traits with many of the top forwards in the world. That isn't to say he'll go on to replicate their achievements in the game but his profile makes him an intriguing player, and one many of Europe's elite will be watching carefully.

He's unpredictable and despite his tender years, Malen knows how to play as part of a counter-attacking team as well as be the leading forward in a side dominating the ball.

He's got the work-rate to be part of a press, too. His biggest asset is probably his positional intelligence. The 20-year-old always finds himself in space and that isn't by chance.

His goal against Ajax is perhaps the best example of what the young forward is all about.

During the build-up on the PSV left, Malen holds his position behind the Ajax midfield and ahead of the defence. As the ball is worked centrally, the PSV No.9 makes his move and times his run to perfection. It allows him to take a touch in the penalty area before calmly firing past André Onana.

It's a transferable skill. The quality of the opposition will no doubt increase if he moves to one of Europe's big five leagues but even the best struggle against intelligent movement.

Malen could be the next best thing to come out of the Eredivisie.