Every great team gets dismantled eventually and Ajax are no different.

Following last season's run to the Champions League semi-finals, the Dutch giants lost Matthijs de Ligt and Frenkie de Jong. In the last week, it was announced Hakim Ziyech will sign for Chelsea this summer. Donny van de Beek will follow the trio in leaving Amsterdam this summer.

The Athletic's David Ornstein claims as many as eight members of Erik ten Hag's first-team squad could depart Ajax when the transfer window re-opens.

Goalkeeper André Onana has been courted by Chelsea as a replacement for Kepa Arrizabalaga. Utility man Daley Blind has been linked with a surprise return to English football at Arsenal while Joël Veltman was previously a target for North London rivals Tottenham Hotspur. Right-backs Noussair Mazraoui and Sergiño Dest are wanted too, the latter by Bayern Munich, while left-back Nicolas Tagliafico was wanted by Real Madrid last summer.

By far the most high-profile departure, though, would be Van de Beek. The 22-year-old was retained last summer when Real came sniffing. From then on, it was inevitable the supremely-gifted midfielder would not remain at the Johann Cruijff Arena for longer than another season.

For his part, Van de Beek has been quick to bat away talk of a move to the 13-time champions of Europe being agreed already.

“It makes no sense I can’t control what people say,” Van de Beek was reported as telling Algemeen Dagblad. “I think it is premature. I have often said: I will not hurry; I am fine here.

In the end, money will dictate that Van de Beek leaves Amsterdam. Ajax's model is built on developing youngsters before selling them while they are at the peak of their powers. Van de Beek is certainly that.

With eight Eredivisie goals, the nimble midfield string-puller is behind only Quincy Promes (11), Dušan Tadić (9) and Klaas Jan Huntelaar (9) in the scoring charts for De Godenzonen while he has weighed in with five assists – Tadić (14) and Ziyech (12) are the only players with more. 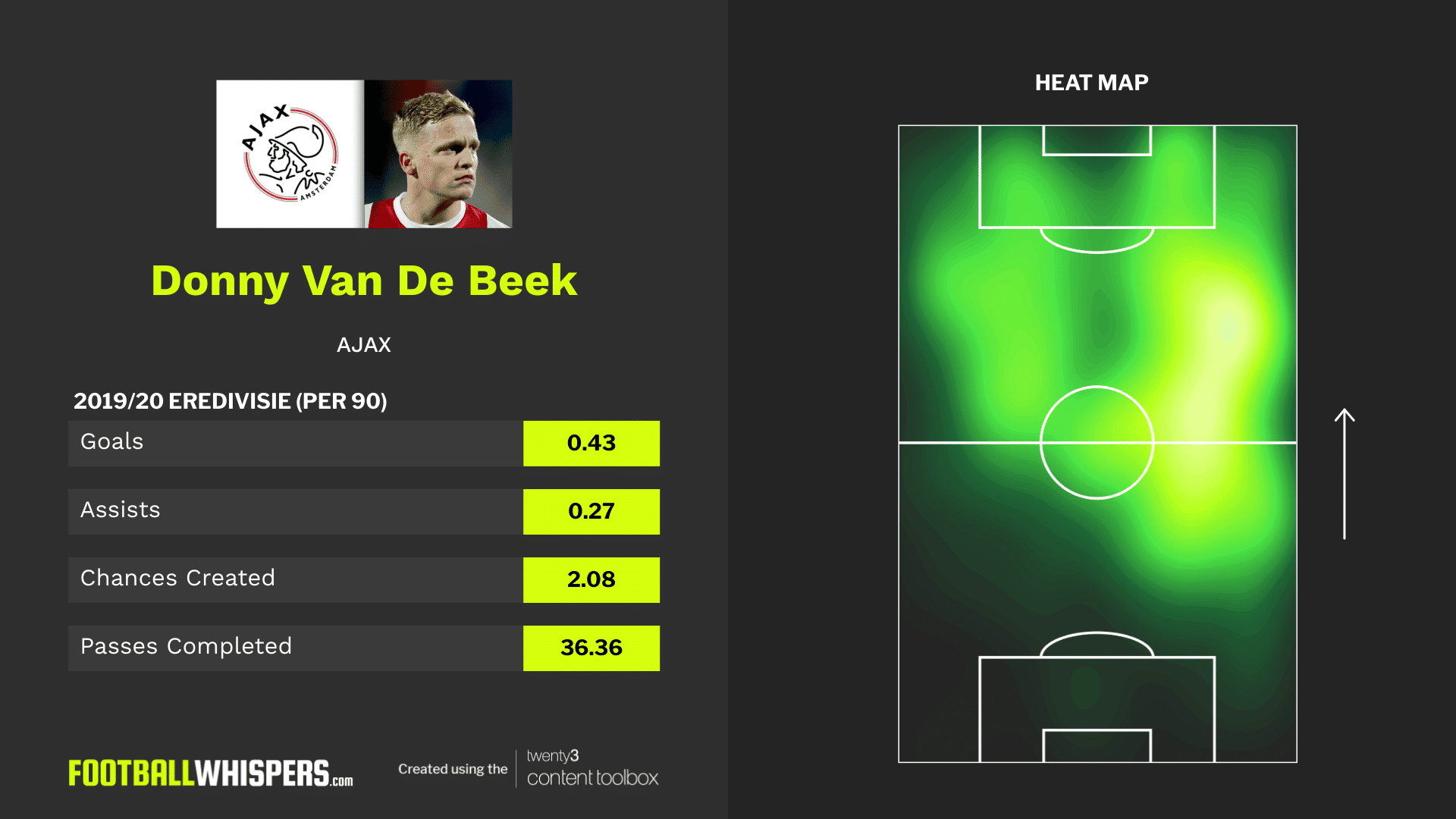 Unsurprisingly, no midfielder in Holland's top-flight has a higher expected goal contribution (xG + xA) than Van de Beek's 11.29, but that only begins to tell the story of the latest exceptional young talent off the Ajax production line.

A boyhood Ajax fan who was taken to what was then known as the Amsterdam ArenA by his father growing up, Van de Beek signed for his team as an eight-year-old. It's no surprise, then, that he ticks all the boxes of the Ajax blueprint now.

Intelligent in his use of space and possession – just witness his assist for Kasper Dolberg against Excelsior last season – the nine-cap Netherlands international can drift between the lines and pops up in the box with the instinct of a No.9. Although he wears No.6 on his back, Van de Beek is not a midfield pivot in the traditional sense of the number.

He can regularly be spotted lurking outside the lines of the six-yard box, taking up the kind of positions an inside forward might be expected to occupy, looking to either make space for others or utilise areas he's made his own. His heatmap, above, indicates a particular penchant for the right-hand flank.

As his goalscoring and assist figures suggest, he gets forward with regularity and breaks into the box 7.82 times per 90 – no midfielder in the Dutch Eredivisie averages more.

Likened to former Ajax skipper Davy Klaassen thanks to his timing and ability to get on the end of things in the penalty area, Van de Beek's game is more rounded than the former Everton flop.

While Van de Beek creates 2.08 chances (per 90), as well as completing 24.82 passes in the opposition's half with impeccable vision and spatial awareness, he works hard for his team and is not restricted to the creative side of the game.

At 6ft, the Nijkerkerveen native is a presence and is more than happy to put himself about, working tirelessly to regain possession for De Godenzonen. In the Eredivisie this season, Van de Beek ranks eighth among midfielders for possessional regains in the attacking third with 0.93 per 90.

Chiefly, though, it's his attacking instincts which have made Van de Beek a transfer target for Real Madrid and Manchester United, among others. If he needs guidance about where to go this summer, he need only speak to team-mates Huntelaar and Blind who have represented Los Blancos and the Red Devils respectively.

The choice, though, will be his. The race for Europe's brightest young midfielder is on.