Like many of the stars of Erik ten Hag's youthful Ajax side who've captured the imagination of football fans around Europe this season, Donny van de Beek was not born the last time the famous Amsterdam club won the Champions League.

A member of Ajax's vaunted youth system from the age of eight, the 22-year-old midfielder has been educated in the philosophies and methodologies that have seen the Dutch club crowned champions of Europe four times in their illustrious history, though.

And, just like 19-year-old captain Matthijs de Ligt, Van de Beek is a lifelong Ajax fan; his father took him to the Amsterdam Arena regularly as a child, and imbued the budding midfielder with a love for Ajax and an appreciation of the wider meaning of continental success to this unique club, who have long been standard bearers in youth development and tactical innovation.

That's why Ajax's run to the semi-finals of this season's Champions League so enraptured neutral observers. A sleeping giant of European football, dormant for two decades, was reawakened by the spirit and style of this eclectic mixture of youth products, veterans and smart acquisitions.

Frenkie de Jong and De Ligt have been the headline acts of this Ajax revival. The former has already sealed a €75million move for Barcelona for next season, and the latter is expected to follow, quite possibly for an even greater fee. 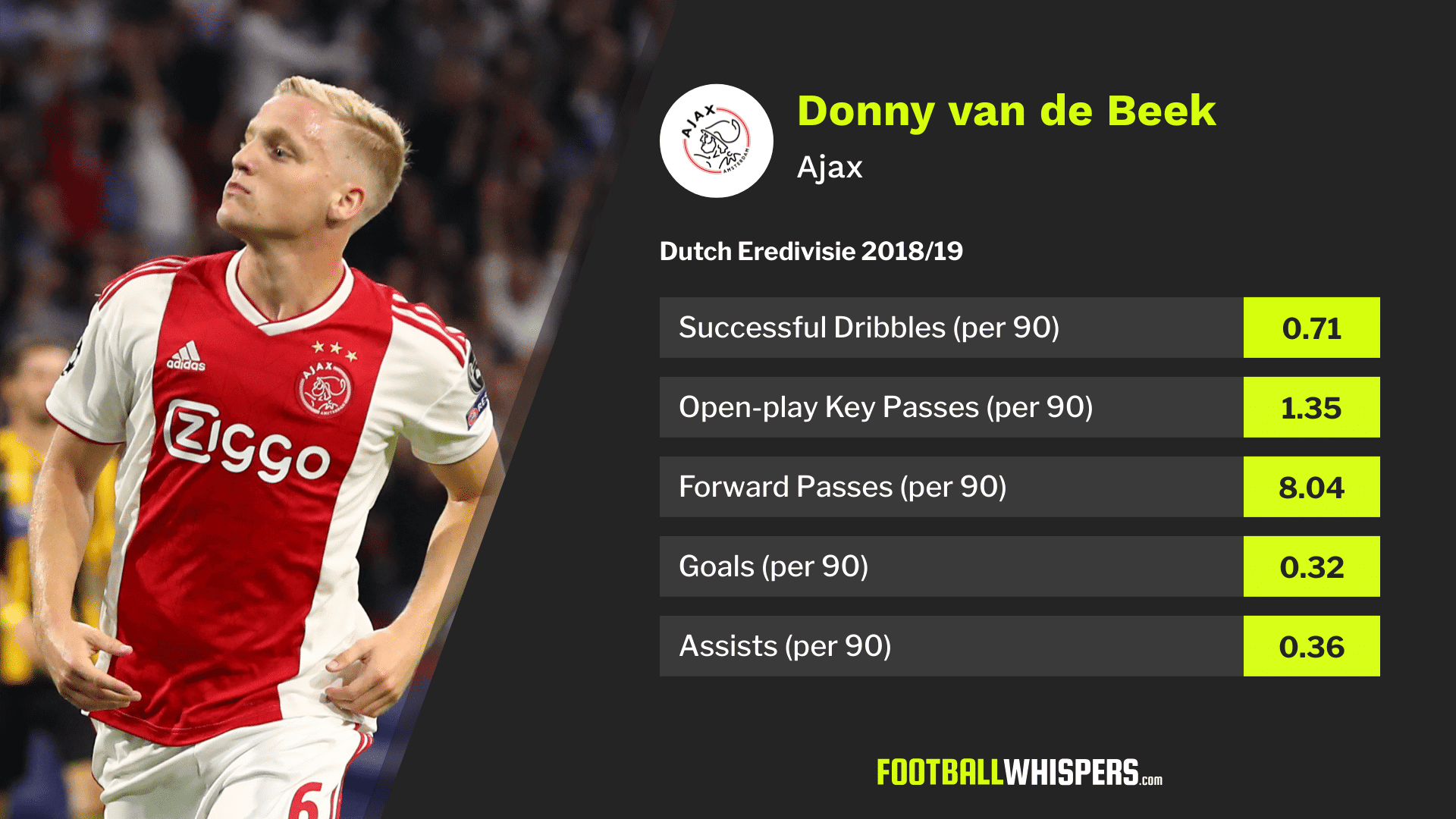 But while Van de Beek's work is often less eye-catching than that of many of his colleagues, he is no less important to Ajax's resurgence under Ten Hag, a fact not lost on Mauricio Pochettino.

Speaking ahead of the second leg of Tottenham Hotspur‘s semi-final showdown with the Eredivisie side, which would ultimately see Spurs triumph on away goals after the most dramatic of comebacks from a 3-0 deficit, the Argentinian tactician raved about Van de Beek's subtle genius.

“Van de Beek. Nobody talks much about him,” Pochettino was quoted as saying by Spanish publication El País. “But he has a dynamic in the game, he gets behind Tadić, he arrives, he works, he scores goals.

“Logically, I love De Jong and De Ligt. But the example of the operation of this Ajax is Van de Beek. I like very much. They have a young player, from the academy, in each line, that shows what the team is.”

As a goalscoring central midfielder with sound technique and impressive vision, Van de Beek has long been compared stylistically to former Ajax captain Davy Klaassen. But being likened to the man who flopped to badly after a 2017 move to Everton undersells the 22-year-old, who now being linked to Spurs and Arsenal.

As Pochettino alluded to, there is a rare intelligence to Van de Beek's style. His ability to drift between the lines of the opposition, linking midfield and attack and finding dangerous pockets of space in the final third, is a difficult skill to coach.

The five-cap Dutch international appears to have a preternatural spatial awareness and moves with the stealth of a special forces operative sneaking behind enemy lines.

The headline numbers on Van de Beek are impressive enough: he's scored 16 goals and provided 12 assists in 55 all-competitions appearances this season. But the midfielder's brilliance lies in a set of skills difficult to perceive, let alone quantify, and which are thus difficult to stop.

A fine technician, he passes cleanly and crisply over short distances and has the ability and wherewithal to switch play with raking cross-field balls when the situation calls.

But even when he doesn't have the ball, Van de Beek, with his forward movement and space-seeking quality, constantly occupies the attention of the opposition; the gravity of his intelligent motion draws defenders and conjures openings for team-mates.

He doesn't have Neres' speed, De Jong's effortless dribbling skills nor Ziyech's ability to shred asunder defences with spectacular through-balls. But Van de Beek has the subtlety and smarts knit all those moving parts together in the Ajax attack.

There was an urgency to Ajax's ambition this season, rooted in the knowledge that this brilliant young team would soon be picked apart in the transfer market. Of all those who look set to depart the Johan Cruyff Arena this summer, Van de Beek might be the hardest to replace.