Dominic Calvert-Lewin achieved a lifelong ambition this summer: he was handed the No.9 shirt at a Premier League club.

“It is a dream come true,” the Everton striker told Sky Sports. “It is such a big club with a great history and it is something that you dream of as a kid.

“With such a number comes great responsibility. I have to accept that on my shoulders and live with what comes with it, good and bad. It is not a burden, it is just part and parcel of being a No.9.

“Being in the best league in the world you are expected to score goals. I am disappointed when that doesn't happen but that is not to say I'm not working on it and trying to improve every day.”

Calvert-Lewin's effort can not be questioned. Watch back any of Everton's three Premier League games this season and the 22-year-old's willingness to close down defenders, to run the channels, to challenge for headers, is immediately apparent.

What is less clear, however, is whether he has the requisite quality and instinct to be a consistent goalscorer at the top level. Something which is expected from a club's No.9.

Calvert-Lewin has just 11 Premier League goals to his name in four seasons at Everton. Many of his appearances in that time have come from the bench – a fact which shouldn't be overlooked – but his total top-flight minutes equate to just 47 matches, ample opportunity to have made a mark.

He has yet to find the net this term and what is of greater concern for Marco Silva and Everton fans alike is the young striker has mustered just two shots in 213 minutes. 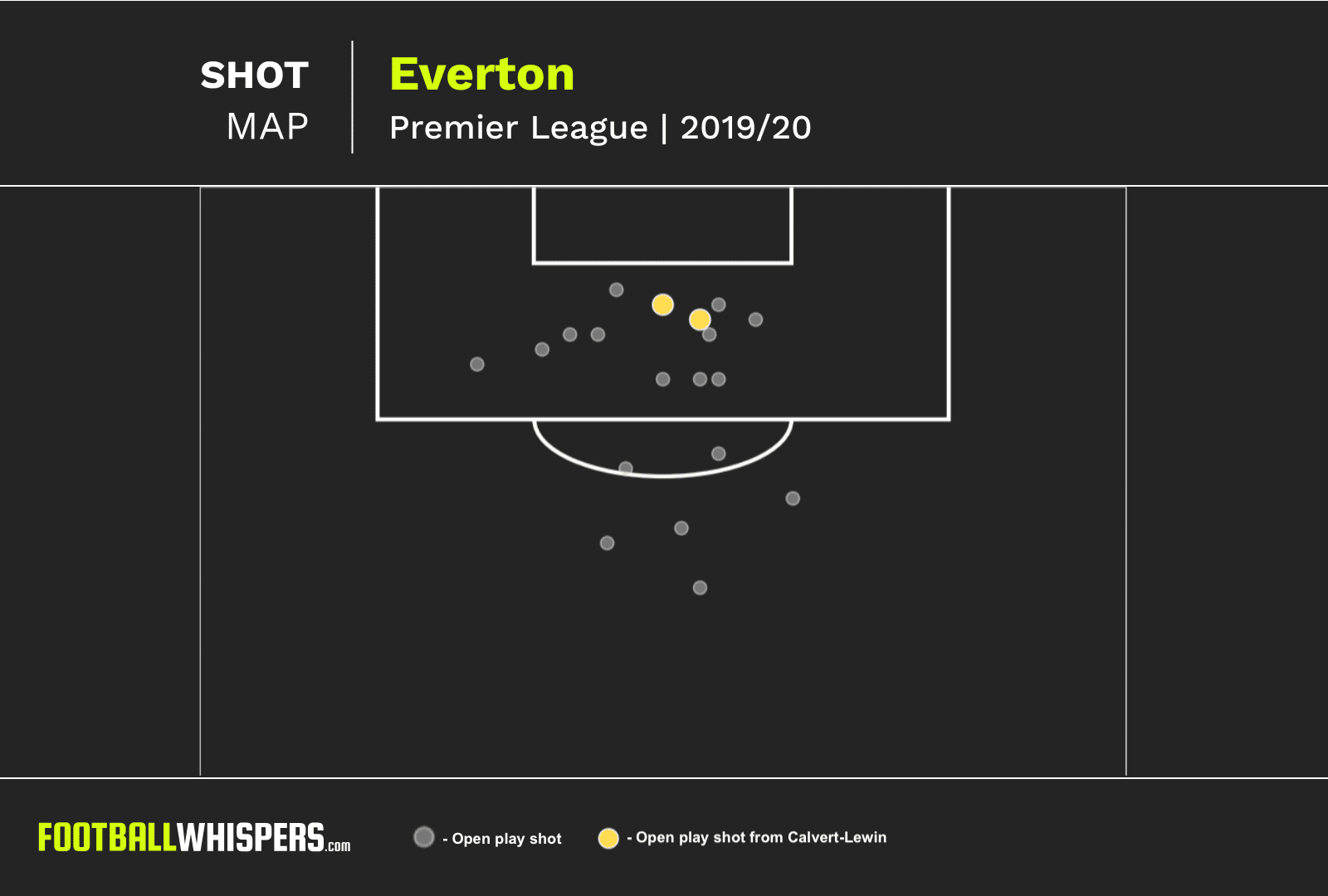 Calvert-Lewin may not, however, be entirely to blame for his lack of threat. The majority of strikers rely on service' they need to be given the ball in dangerous areas of the pitch.

As detailed by The Athletic, Everton's creator-in-chief Gylfi Sigurðsson has only exchanged six passes with the young forward. For context, the Iceland international has linked with Richarlison on 18 occasions and Bernard 12 times.

It isn't a huge surprise that Sigurðsson has been able to find the two Brazilians with greater regularity. They are by the nature of their positions out wide in greater space.

In his central role, Calvert-Lewin will often be marshalled by two centre-backs. It is far more difficult to feed the ball into his feet or to find him in space. It is far from impossible, though.

The very best forwards make room in crowded penalty boxes to receive the ball and are able to fashion shooting opportunities from very little. It's these traits Calvert-Lewin appears to lack. 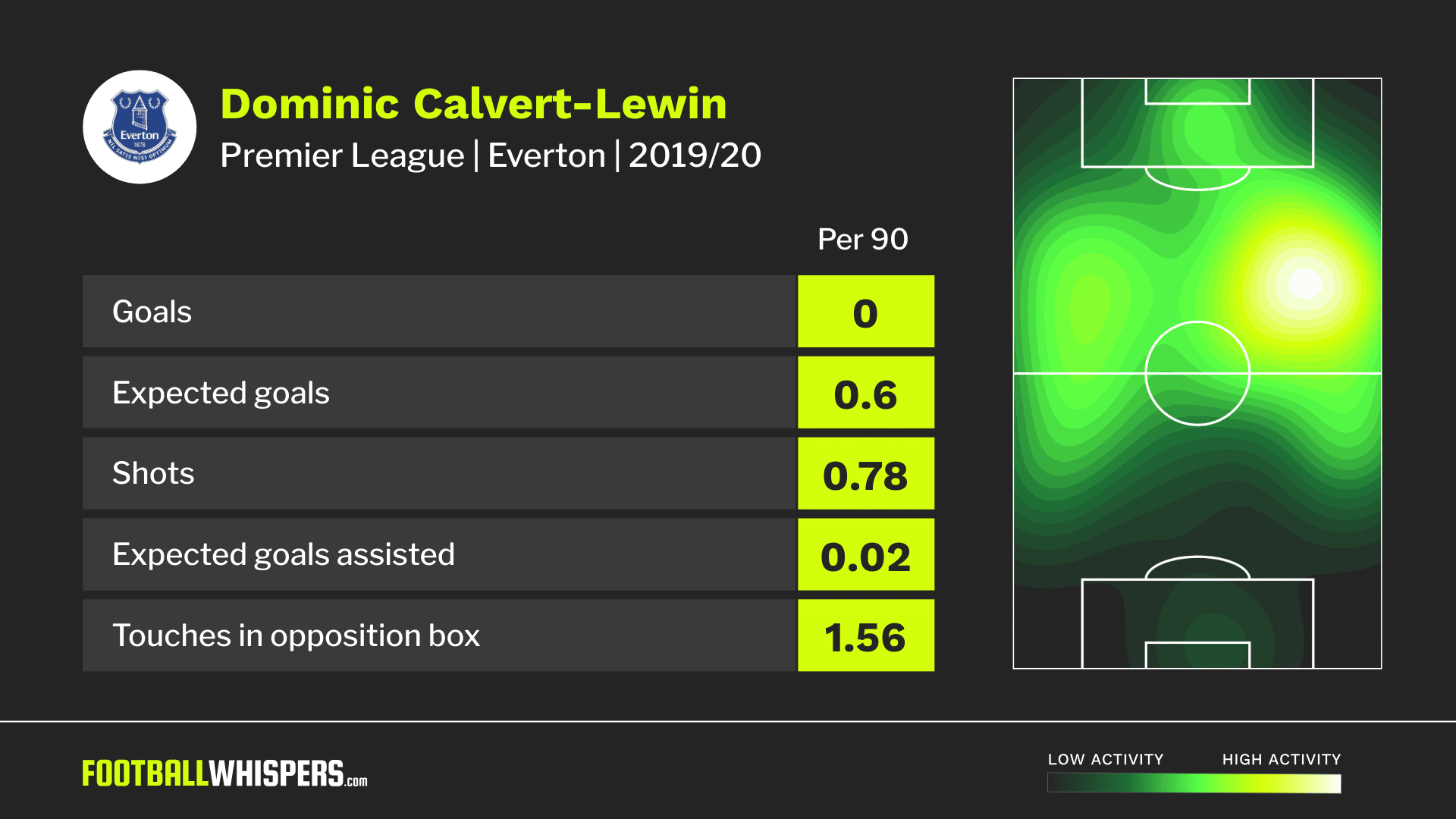 The heat map above highlights the Under-20 World Cup winner does plenty of work outside of the penalty area but not too much within it.

And that is why Calvert-Lewin's 1.56 touches in the opposition box per 90 is bettered by almost 50 other Premier League forwards. For further context, Chelsea's Tammy Abraham, another young English striker, is averaging 4.76 touches in the box per 90.

It sounds simple but the majority of goals are scored from inside the area. If the Everton forward doesn't involve himself closer to goal, he is never going to become a prolific scorer.

His place in the Everton side will also come under threat. In Moise Kean, the Toffees possess an elite-level finisher. He proved as much in his limited game at Juventus last season. 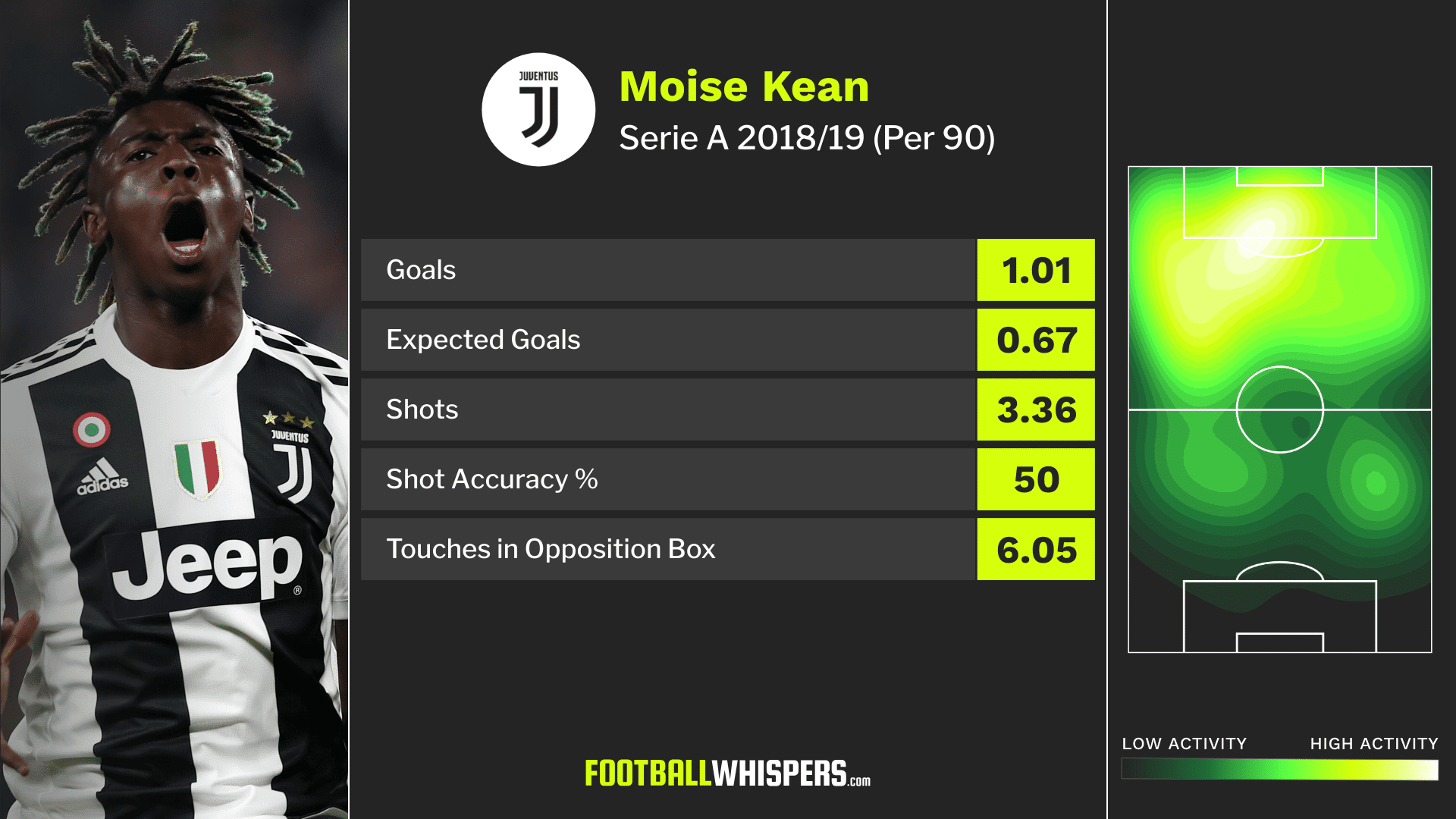 Kean deputised for Cristiano Ronaldo in Serie A last term when the Champions League knockout rounds began and he thrived. As the graphic above indicates, the 19-year-old was a ruthless finisher and a constant menace in the penalty area.

In essence, Kean is everything Calvert-Lewin isn't. And now he is match fit it would be no surprise to see Silva start the Italian international on a regular basis, no matter who has that No.9 shirt.