It feels strange to discuss a 23-year-old player who happens to be a club legend and that club's all-time leading scorer. But that's exactly what Domenico Berardi is to Sassuolo. Whatever happens to the Italian side in the future, Berardi has etched his name into the club's lore after playing an integral role in their rise from Italian football obscurity to the top flight.

And his contributions have not gone unnoticed around Europe. During the summer, the forward emerged as an Everton transfer target, while he has also been the subject of Liverpool, Chelsea and Tottenham Hotspur rumours, too.

Sassuolo are struggling. The Modena-based club have parted ways with coach Cristian Bucchi after a disappointing run of results that has plunged them into a battle for survival in Serie A, sitting two places and one point above the relegation zone.

As I Neroverdi get sucked deeper into a scrap to avoid the drop, it seems only natural that Berardi, their prized asset, continues to be linked with a move away from the Mapei Stadium-Città del Tricolore.

With the possibility of a departure from his beloved Sassuolo a probability at some point, we've taken a detailed look at Berardi to see what the fuss is about.

Who Is Domenico Berardi?

Berardi was a Sassuolo youth academy graduate, being promoted to the senior team in 2012. At just 18, he helped the club achieve promotion to Serie A in his debut season, scoring 11 goals in 39 appearances. His overall performances earned him the Serie B player of the season, marking him out as a star in the making in Italian football.

Suffice to say, he lived up to the billing in the big time. Berardi memorably struck all four goals as Sassuolo recorded a 4-3 win over AC Milan. But it wasn't a thrilling flash in the pan from the youngster, who also netted a treble in a 4-3 win against Fiorentina, finishing the season with 16 goals to help his side avoid relegation.

His performances during that campaign thrust him into the international spotlight as he earned a call-up to the Italy U21 side. In his third appearance for the Azzurini Berardi scored the match-winner in a crucial 3-2 win over Serbia to help them qualify for the 2015 UEFA European U21 Championships.

Although he is yet to be capped for Italy at senior level (an injury forced him to withdraw from the squad in October 2015 having been called up by Antonio Conte), he has continued to score goals with regularity for Sassuolo and it's only a matter of time before is given a bigger platform on which to showcase his talents.

What Are Berardi's Main Strengths?

A nimble, fleet-footed forward with an excellent touch and calmness in front of goal, Berardi possesses several of the main attributes managers would look for in an attack-minded player. While the step-up from Serie B to A was a daunting prospect for Sassuolo in 2013, the ease with which Berardi acclimatised to his top-tier surroundings further endorsed his status as an emerging Italian prospect.

Berardi reached 30 Serie A goals before the end of his second season, meaning he had reached the mark before players like Francesco Totti, Alessandro Del Piero and Roberto Baggio, with whom he has been compared to by former Italy and AC Milan boss Arrigo Sacchi.

His goalscoring exploits also earned him the Bravo Award in 2015 as Europe's most promising young footballer, following in the footsteps of Paul Pogba, Eden Hazard, Cristiano Ronaldo and Lionel Messi. That can be used as a barometer to measure just how highly he is regarded.

He flourished as the right-sided attacker in Sassuolo's 4-3-3 system under Eusebio Di Francesco, who is now overseeing Roma's bid for Serie A glory. Valencia frontman Simone Zaza was just one of the players with whom he established a seamless connection under Di Francesco.

Berardi is known as a quick, hard-working and technically gifted forward. His favoured position is on the right, which allows him to use his low centre of gravity to cut inside and link-up with teammates as a modern, inverted winger. However, he does possess the pace to burst towards the by-line too.

As well as an enviable scoring record, Berardi has been a chief supplier of Sassuolo's goals in recent seasons. He was Serie A's top assist provider in the 2014/15 season and it's this combination of flair, incision and imagination that have cemented his status as a sought-after property.

What Are Berardi's Main Weaknesses?

The 23-year-old isn't enjoying the best of seasons currently. His only Serie A goal this term was from the penalty spot and there is a sense that he has not fully recovered from suffering serious knee ligament damage last season, which ruled him out for nearly five months.

Circumstances have also been trying. With Di Francesco's departure to Roma, Berardi lost a mentor. Under Bucchi, Berardi was unable to capture his finest form.

Tactical tinkering didn't help. While Berardi excelled in Di Francesco's 4-3-3, Bucchi experimented with a 3-5-2 and a 4-3-1-2, somewhat restricting Berardi's influence in the final third. But perhaps that is a slight red flag against the player. His inability to adjust to different systems shows that he has a long way to go before his tactical nous matches the technical side of the game.

He is also known for being stubborn and, at times, difficult to manage. However, with an arm around the shoulder and a new mentor, Berardi is more than capable of hauling himself out of his mini-slump and becoming the key man in the green and black of Sassuolo once more.

Although this season has not produced Berardi's most impressive numbers, his career record speaks for itself – as you can surmise from below. 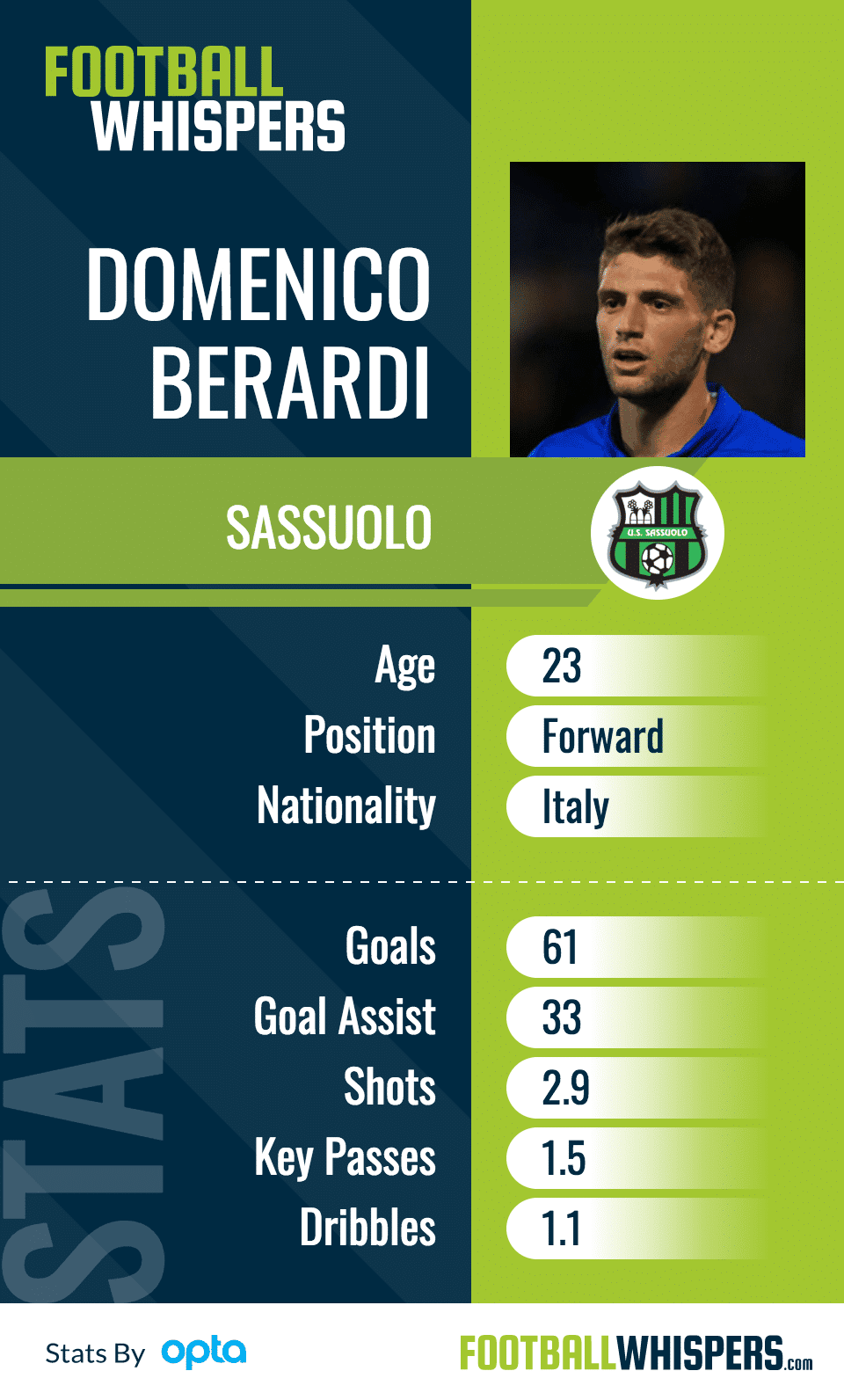 How Much Is Berardi Worth?

Considering his record, importance to Sassuolo and scope for improvement, the club are likely to demand a fee significantly north of the £22.75million he is valued at on Transfermarkt.

He is under contract until 2022 and Sassuolo may demand somewhere in the region of £30-40million. It remains to be seen what happens but expect Berardi to be a popular name in the gossip columns in both January and next summer.

Why Top Premier League Clubs Should Try To Sign Berardi

An abundantly talented attacker with excellent goalscoring and creative abilities, Berardi has the skills and potential to be a genuine Premier League star.

Chelsea boss Conte clearly rates him, having called him up for Italy two years ago, and perhaps with the Italian's direction, Berardi could thrive in England.

Rightly regarded as one of Italy's brightest prospects, Berardi would be an exciting option for Premier League sides looking to add flair, speed and clinical finishing to their attacking line.