Domagoj Vida, after Croatia’s heroics in the World Cup last summer, is a name that will be familiar to many Premier League fans. Those who have seen him play, too, do not forget him quickly. A towering, powerful defender, with sharp features and long blonde hair, Vida is immediately recognisable.

And he could soon be on his way to the English top flight. The 29-year-old, who has been at Beşiktaş in Turkey for the last two seasons, has been linked with a move to Wolverhampton Wanderers this summer. Liverpool, Everton and Manchester United, in the aftermath of the tournament in Russia, were supposedly interested last year, too.

If he does make the switch to the Premier League, Vida will certainly make his presence known. He has a reputation as a joker and has been caught up in controversies, most recently after shouting “Glory to Ukraine” while celebrating during the World Cup in Russia.

Back in 2012, when playing for Dinamo Zagreb, Vida was fined €100,000 for drinking a can of beer on the team coach just before a cup game. And a year earlier, he was embroiled in match-fixing allegations after Dinamo lost 7-1 against Lyon in the Champions League. Vida had been seen winking at Bafetimbi Gomis after a goal was scored.

These misdemeanors have become less frequent with age, though Vida remains abrasive and confrontational on the pitch. From the beginning of his career, playing for Osijek in Croatia, he has been a mean attacker of the ball, a traditional, unapologetic defender.

Vida joined Bayer Leverkusen in 2010 but managed just one league appearance and lasted just a single season. “At this time, we had a really good team. We were second place in the Bundesliga that season,” Vida’s former teammate at Bayer, Stefan Reinartz, told Bleacher Report.

“Mentally he was really good but his technical ability, his first touch, his ball control, his passing, wasn't very good. I remember that Jupp Heynckes, who was our coach, always said, ‘OK, he's a good player. I like him but from a technical point of view I'm not that fond of him.'”

Vida has since made significant improvements to his game. He is no longer just a warrior-like centre-back but one competent with the ball at his feet. 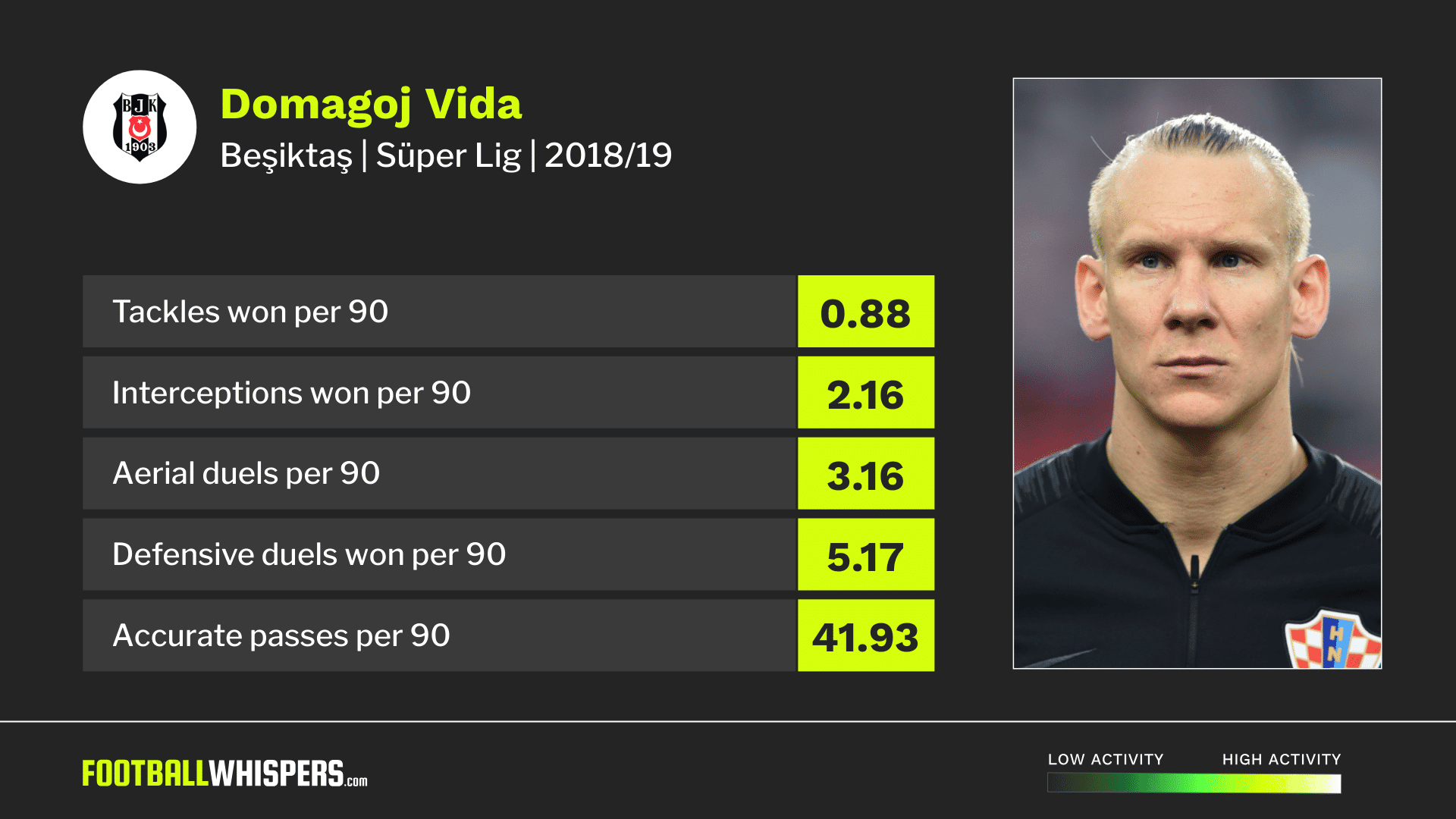 After leaving Bayer, Vida joined Dinamo, where he spent the next six years. It was with the 20-time Croatian champions that he further developed as a player, impressing under the guidance of coach Ante Cacic.

Cacic, who was manager of the Croatian national team from 2015 to 2017, made Vida a regular in the international setup, too. He has not looked back since, starring at the 2016 European Championships and then the World Cup.

Vida joined Beşiktaş in January of last year and has impressed in the Turkish Süper Lig. In contrast to Heynckes’ assessment of the defender at Bayer Leverkusen, he has completed an average of 41.93 passes per 90 from the back, with an accuracy of 83.7 per cent. He ranks high for aerial duels won (3.16 per 90) and interceptions (2.16 per 90) too.

He is prone to the odd error, as Beşiktaş discovered when he was sent off 16 minutes into his side’s 5-0 defeat at Bayern in the last 16 of last season’s Champions League. Generally, though, Vida is a dependable performer, a determined and resolute defender with a mischievous side both on and off the pitch.

Vida could provide depth at the back for a Premier League club next season, but is unlikely to be an upgrade for those in the top half. If Wolves did pursue a deal, though, they might find that the Croatian is available for a reasonable price.

Whether he is at the level required to play for Liverpool or Manchester United is another matter. But, as his opposition discovered in the World Cup, though, Vida should not be underestimated.