Kasper Dolberg went from being the next big thing at Ajax to the forgotten man in the blink of an eye.

The Denmark international burst onto the scene as an 18-year-old for the Amsterdam club at the start of the 2016/17 campaign. He spearheaded Peter Bosz's side as they claimed a Europa League final spot against Manchester United.

They ultimately lost the final in Stockholm, suffering a 2-0 defeat, but the squad had done enough to make their mark.

Dolberg finished the season with 23 goals in 47 appearances. His performances didn't go unnoticed and it wasn't long before he was being linked with many of Europe's elite.

Jürgen Klopp spoke openly about his talents and this fuelled speculation Liverpool wanted him. Chelsea and Manchester United have previously been linked while Borussia Dortmund were reportedly long-term admirers.

But attention soon diverted elsewhere with Dolberg managing just six Eredivisie goals during 2017/18, ten fewer than the year before.

Last season he performed better, netting 11 times in the Dutch top flight, but he was battling Dušan Tadić and Klaas-Jan Huntelaar for a starting berth in Erik ten Hag's XI.

With Tadić stealing the limelight in his newfound false-nine role and Huntelaar doing a job as his understudy, Dolberg's impressive season went under the radar.

He couldn't match Tadić's output or get close to Huntelaar's 1.02 goals per 90 in the Dutch league. But Dolberg averaged 0.65 goals last term and his expected goals average was 0.71. 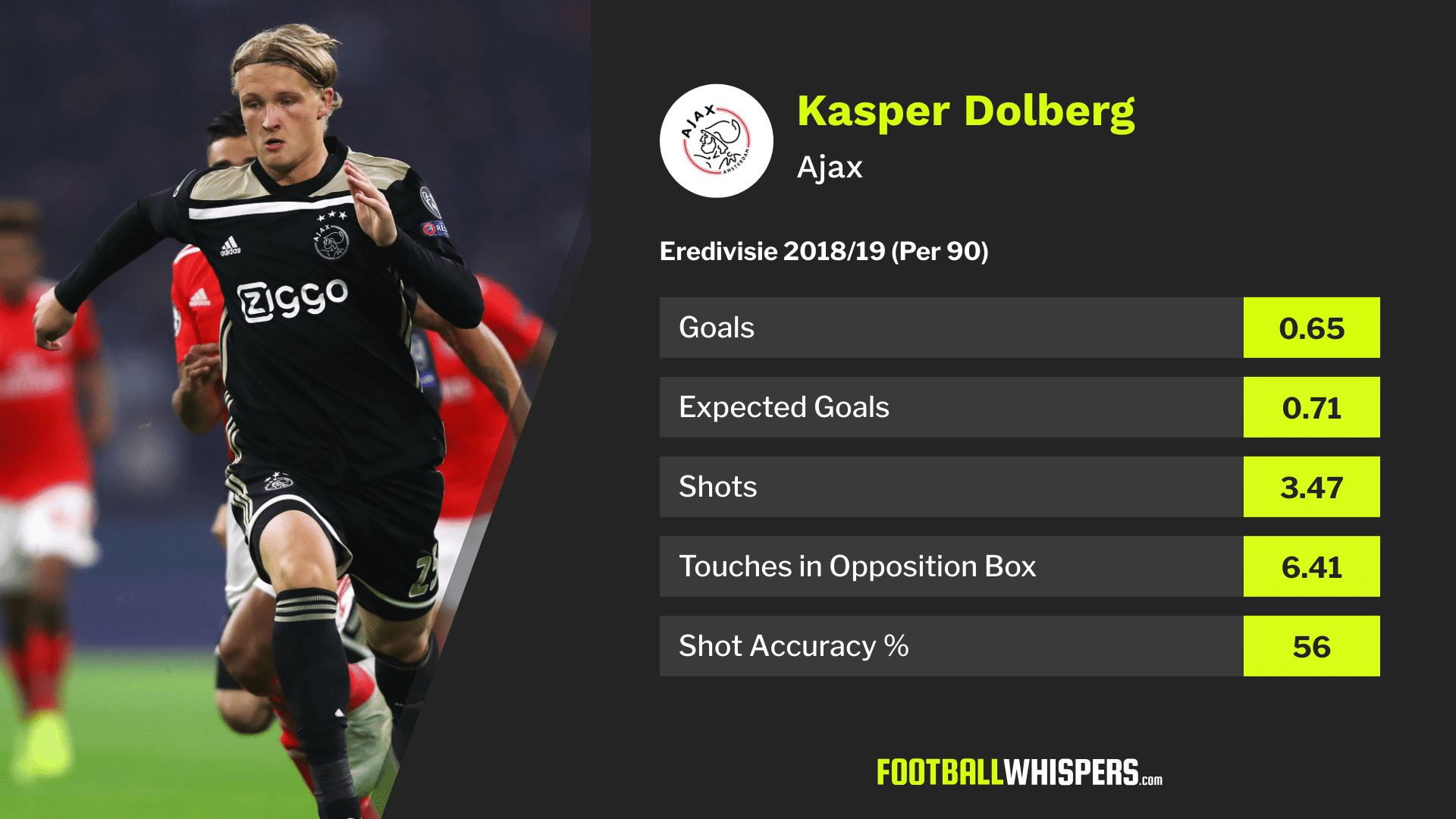 For context, during his unforgettable 2016/17 season, his expected goals average per 90 was just 0.45. Of course, there's a lot of context to be taken into account.

Firstly, he's playing in a better side now. Chances arrive more often and, at times, he's coming off the bench against tired opposition.

But the 21-year-old has clearly improved his positioning, it's a significant jump and without his desire to get into those areas, he simply doesn't get the opportunities he's been getting.

Dolberg is taking more shots than before while maintaining a healthy 56 per cent shot accuracy.  The Silkeborg-born forward is also taking more touches in the box, which suggests his composure is improving – just as expected with age.

The talent was there from the outset. Danish scout John Steen Olsen spotted Dolberg and he was the man responsible for bringing Zlatan Ibrahimović, Viktor Fischer and Christian Eriksen to Ajax.

The talent is still there. But Dolberg might have to move in order to fulfil his potential. And that's through no fault of his own. It's just timing.

Bosz built an attack around him. But. after his departure, Ten Hag has other plans. Those plans centred around Tadić and Huntelaar. Dolberg still gets opportunities but he's not a guaranteed starter like he might be elsewhere. During this stage of his development, it's what he needs.

Last season's data doesn't provide a huge sample size but it's enough to show clubs that, deployed in a system he suits, Dolberg can be a reliable goal-getter. With the English transfer window closed, he won't be moving to the Premier League this summer but there's a chance he'll play in England one day. He has many of the traits required.

One thing which works in his favour – and one of the reasons clubs will be looking at him if he is available – is his footballing intelligence. The Ajax forward knows how to find space when it looks impossible and he knows when to play the ball and when to take it on himself. That’s transferable no matter what league you’re playing in.

Dolberg's stock may have fallen but he's more talented than ever before. He just needs a platform to show the world and sadly for Ajax that might not be in Amsterdam.