It wasn’t long ago that Dele Alli was being touted as potentially the first £100million player to depart from the Premier League.

Real Madrid reportedly wanted to make the midfielder one of their many Galacticos and Barcelona were mooted as a potential destination for the free-scoring Tottenham Hotspur star.

Manchester United had eyes on the former MK Dons wonderkid, too, and it felt a matter of when and not if he would leave Spurs in a big-money move.

Alli was one of, if not the, most highly-rated youngsters in football for a period. Fast forward three years, however, and the conservation surrounding Alli is whether or not he’s even good enough for Mauricio Pochettino’s first-choice XI.

The England international has appeared just four times this season and Spurs have failed to any of those matches.

The 23-year-old came off the bench in the draw with Arsenal, he started the 2-2 draw with Olympiacos as well as the Carabao Cup loss to Colchester United. He then returned to the first-team in the 7-2 defeat to Bayern Munich.

To round off Alli’s miserable start to the 2019/20 season, it’s been announced he’s not in Gareth Southgate’s England squad for the upcoming matches against the Czech Republic and Bulgaria.

The Three Lions manager said injury, and not poor performances, is what prevented him from naming the Spurs No.20 in his squad: “With Dele [Ali] and Alex [Oxlade-Chamberlain] in particular, they haven’t really had the number of games this year to get themselves into a rhythm. They’re both recovering from different injuries, one long term, one a bit shorter term.”

The versatile attacker has gone from being one of England’s brightest hopes to something of an afterthought. It’s been quite the drop-off and not one many envisaged after Alli’s explosive 2016/17 campaign when he netted 18 Premier League goals.

That season was supposed to be the making of Alli, but in reality, it could prove his downfall.

He was used as a second striker behind Harry Kane during that campaign and was getting into goalscoring areas on a regular basis. He consistently found the back of the net but it‘s a feat impossible to repeat if the conditions and environment aren’t the same. And since that season they haven’t been.

Alli’s role has been tweaked but the expectations haven’t.

With Son Heung-min and then Lucas Moura tasked with supporting the attack, the England international was deployed in a more creative role. Instead of being used in a front three he was starting games in midfield. He was given different instructions, was occupying different areas of the pitch, and was essentially a completely different player.

Yet people still compared him to that 18-goal campaign and, on paper at least, he was underperforming. In the eyes of many, Alli was on the decline. 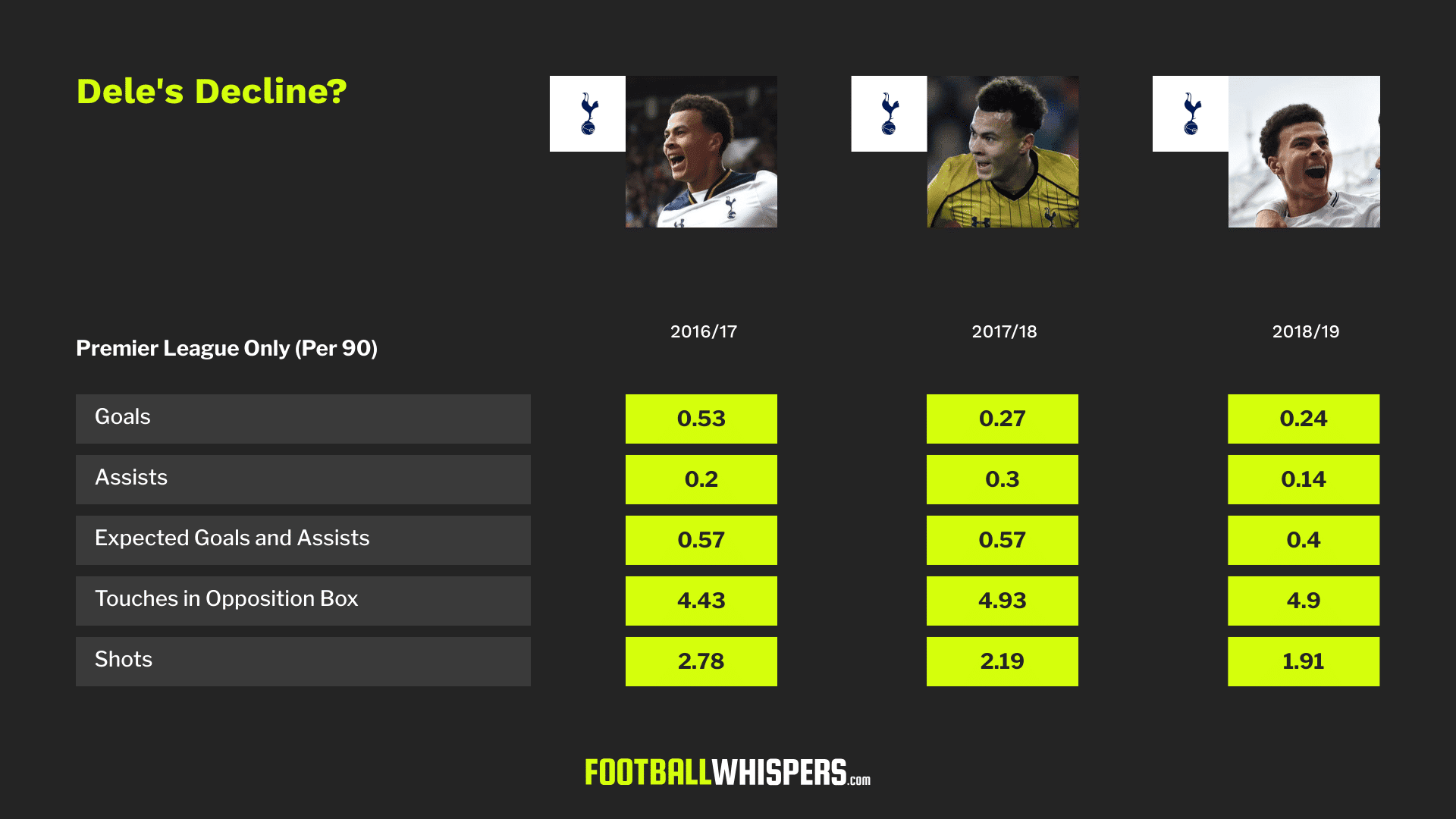 That perception was nonsense… at least to begin with. But with Spurs now in a weird state of flux – they’re in transition but many of their long-serving players appear to be stagnating – Alli’s performances are beginning to suffer.

There's a real chance the 23-year-old becomes another lost English talent. Misused, undervalued and, ultimately, wasted. Though things started off well for Alli in North London, he may need a change of scenery to get his career back on track.

With Spurs not settled on a formation or a style, Pochettino has a fair few players to fit into an XI. Alli is, at times, being shoehorned into the team. While it might not be something Tottenham fans want to accept, now could be the perfect time to end this relationship before it really turns sour.

Alli's stock isn't the highest it's ever been but Spurs could still command a large fee. After all, he's still only 23 and has a remarkable record in the Premier League for someone of his age.

It's a move that may suit all parties.

Spurs could use the money to sign players suited to Pochettino's system and improve their squad, and Alli gets a fresh start, one which enables him to, hopefully, rediscover the form which made him one of the most-feared attackers in the world for a 12-month period.