The top two teams in the Allsvenskan right now go head-to-head this weekend in what should prove to be a close and competitive 90-minutes of football. As things stand, hosts Hacken sit 1pt and one place clear of their guests but Djurgarden have much the better goal difference.

We're expecting goals in this game at both ends of the pitch just as we have seen in two of the last four meetings between Hacken and Djurgarden in the Allsvenskan. Both teams head into this weekend's big game in good goalscoring form. Each of Hacken's last five fixtures have seen both teams score and the hosts have scored in all six of those games, while Djurgarden have also found the back of the net in each of their last six matches and their recent away game against Sundsvall ended in a 5-2 victory.

This fixture can either end up being tight and tense or open and exciting, and we're backing the latter this weekend. Over 2.5 goals have been scored in two of the last four meetings between these two clubs, while four of Hacken's and four of Djurgarden's last six outings in all competitions have also produced at least three goals.

Top Betting Odds and Stats for Hacken vs Djurgarden

Hacken put in a five-star performance last time out away at Sundsvall. A penalty from Jeremejeff put the visitors 1-0 up after just 6-minutes but the sides went in level at the break following a penalty equaliser from the home side. However, Hacken raced through the gears in the second half, going back in front through Hovland in the 58th-minute before Jeremejeff scored his second goal of the game to make it 3-1 with 64-minutes on the clock. With just 10-minutes remaining, Uddenas added a fourth goal for the visitors and 5-minutes after that, Olden Larsen scored to wrap up a convincing 5-1 win for Hacken.

Anything Hacken can do, Djurgarden can do better! Sunday's guests were at home last weekend against Varnamo where goals from Radetinac and Eriksson put Djurgarden 2-0 up at the interval. Early in the second forty-five, Banda made it 3-0 and Eriksson scored his second goal of the game in the 67th-minute to make it 4-0. In stoppage-time, Edvardsen added a fifth goal to complete Varnamo's humiliation.

Hacken: Jonathan Rasheed and Erik Friberg are both injury concerns for the hosts this weekend.

Djurgarden: Elliot Kack looks set to miss out once again this weekend due to a knee injury.

Questions about Hacken vs Djurgarden 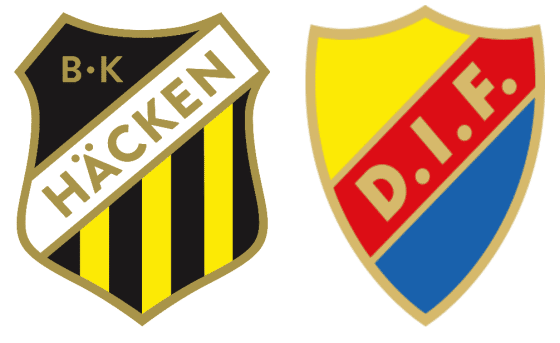