Few players in Watford‘s recent history have had the ability to dazzle and frustrate quite like Roberto Pereyra.

On his day, the Argentine international can make the game a joy, gliding past opponents for fun, linking the play and scoring goals – just take a look through his back catalogue of stunning strikes for the Hornets on YouTube. All too often, though, he is anonymous and ineffective; a passenger.

Pereyra isn't alone in that. To an extent, it comes with the territory of being a skillful and creative attacker. When they aren't supplying assists or scoring goals, they tend not to contribute a lot. It makes them easy targets for supporters.

In any other country that might be fine. As British football fans, we're conditioned to primarily judge players on their grit, determination, work-rate, bottle and, best of all, ‘passion'.

On more than one occasion Pereyra's Watford career has appeared to be fizzling out. Several times the Argentine has been linked with a reunion with ex-Hornets coach Walter Mazzarri at Torino – a return to the city where he reached the Champions League final with Juventus in 2015. 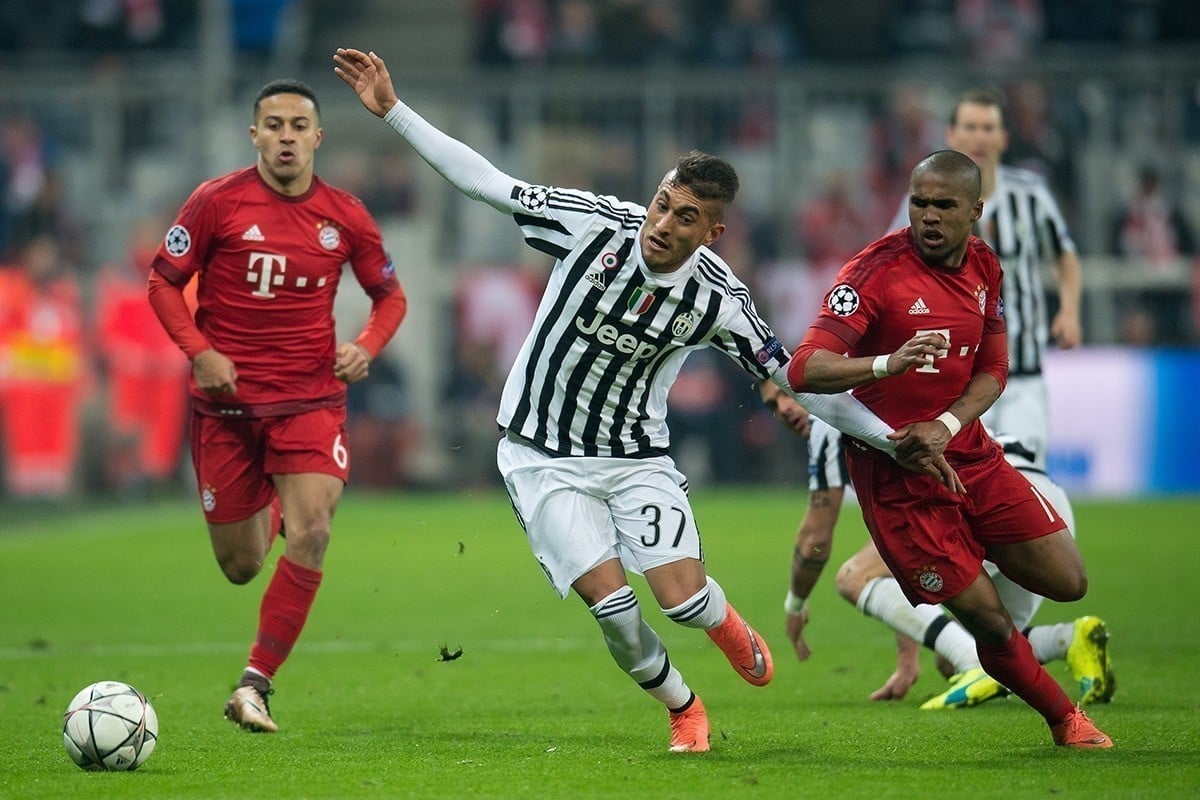 Now there are reports in Italy claiming Watford will try to sell the 28-year-old in January in a bid to recoup as much for him as possible before entering the final 12 months of his contract at Vicarage Road.

The question is whether now is the time for the two parties to go their separate ways.

There is no doubting Pereyra's enormous ability. You can't call Lionel Messi, Sergio Agüero and Paulo Dybala international peers without being supremely talented. Nor do you make more appearances than anyone else in a double-winning season with Juventus.

There have been mitigating circumstances. His first season in England was only 13 games old when it was cut short at Manchester City, cruciate ligament damage meant Hornets supporters would not get to see their big-money signing again until the following season.

By that point, the head coach – as is the way at Watford – had changed, Marco Silva succeeding Mazzarri. The Portuguese had a different vision for Pereyra, moving him from No.10 to a nominally left-wing role but with the licence to drift inside.

Pereyra struggled to stamp his authority on games and looked a shadow of the player who had shone prior to the injury. He lacked conviction in and out of possession and there was a feeling he didn't fully trust his body and was holding something back every time he took the field.

Things did not improve following Silva's sacking – not to begin with at least. It was not until Gracia's sixth game at the helm Pereyra started on the left-hand side. A run of three goals in his final six appearances of the campaign, and a mesmerising display at home to Newcastle United, finally changed opinion.

The Argentine and Watford started 2018/19 in flying form, winning four from four to – albeit briefly – top the Premier League.

Gracia's switch from 4-2-3-1 to 4-2-2-2 proved a masterstroke. Able to play closer to the penalty area by starting wide and driving inside, the former River Plate attacker thrived and hit three goals in the first month. 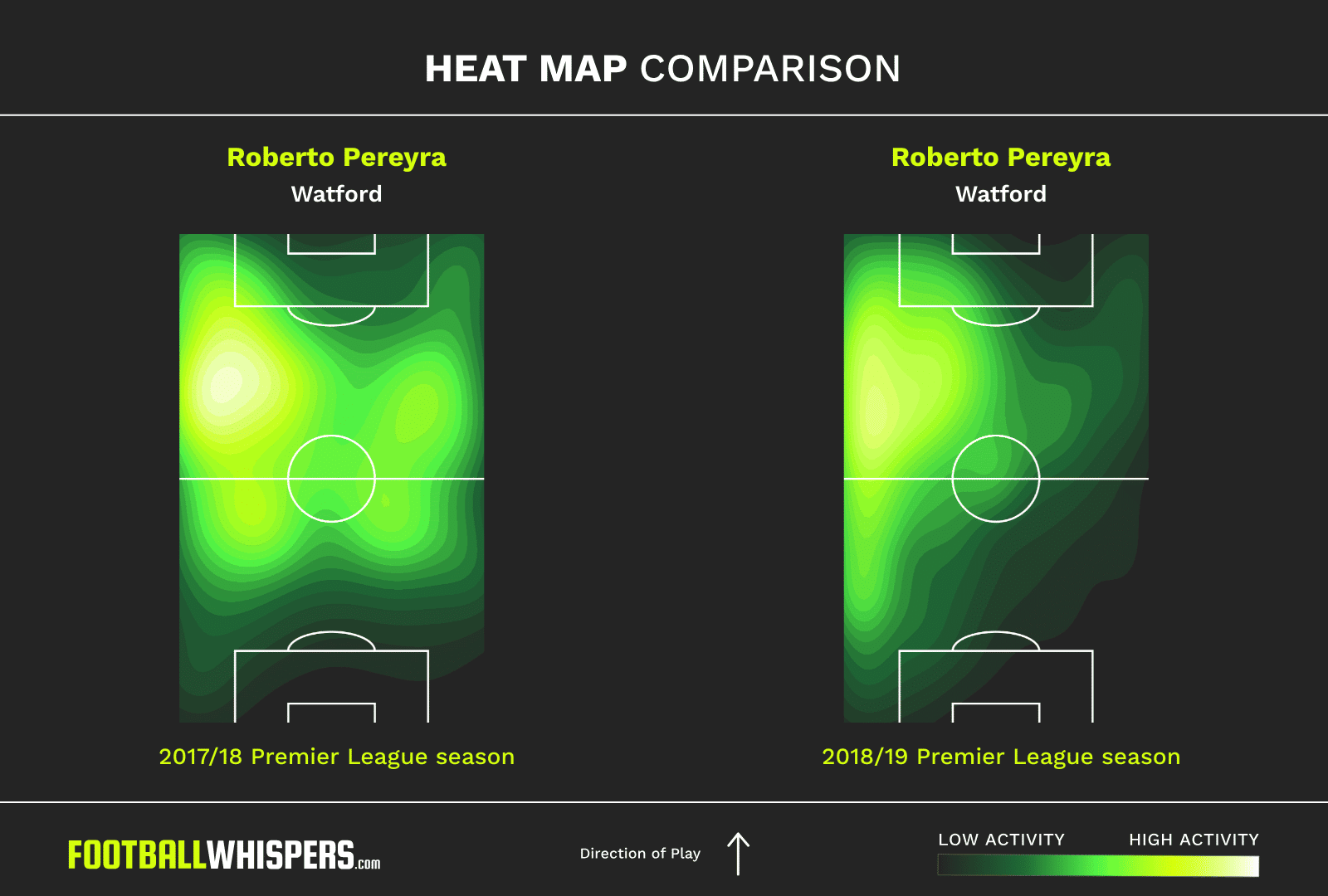 The switch came with added defensive responsibility, though, and, as is evident in the heatmaps above, Pereyra enjoyed a higher volume of activity in deeper positions than in the previous campaign. That was reflected in the fact he averaged more interceptions (0.73 per 90) and attempted more tackles (0.73) than in any of his three seasons at Vicarage Road.

But he also became one of the first lines of defence, pressing high to regain possession 0.7 times per 90 in the attacking third. Gracia had somehow turned this fanciest of Dans into the modern pressing forward.

But as the team's form suffered, so did Pereyra's. Watford's run to the FA Cup final proved a distraction and it was fitting the Argentine missed the gilt-edged chance to put the Hornets 1-0 up at Wembley before Manchester City whacked them for six.

So near yet so far. Watford's nearly man.

Now owner Gino Pozzo, chairman Scott Duxbury and technical director Filippo Giraldi have a decision to make. In order to protect the value of their asset, they must offer Pereyra a new deal before next summer, one which would likely take him beyond his 30th birthday.

The Hornets are happy to do that. But only in the right circumstances – centre-back Craig Cathcart signed a four-year extension this summer aged 30. But Pereyra is a different case. He is one of the team's stars and will command a salary in keeping with his status.

In paying top dollar, Watford would be restricting his future market if they do try to move him on. Furthermore, as an attacking player, the lifespan of his career isn't as long: any loss of pace, acceleration and mobility will hit him hard. 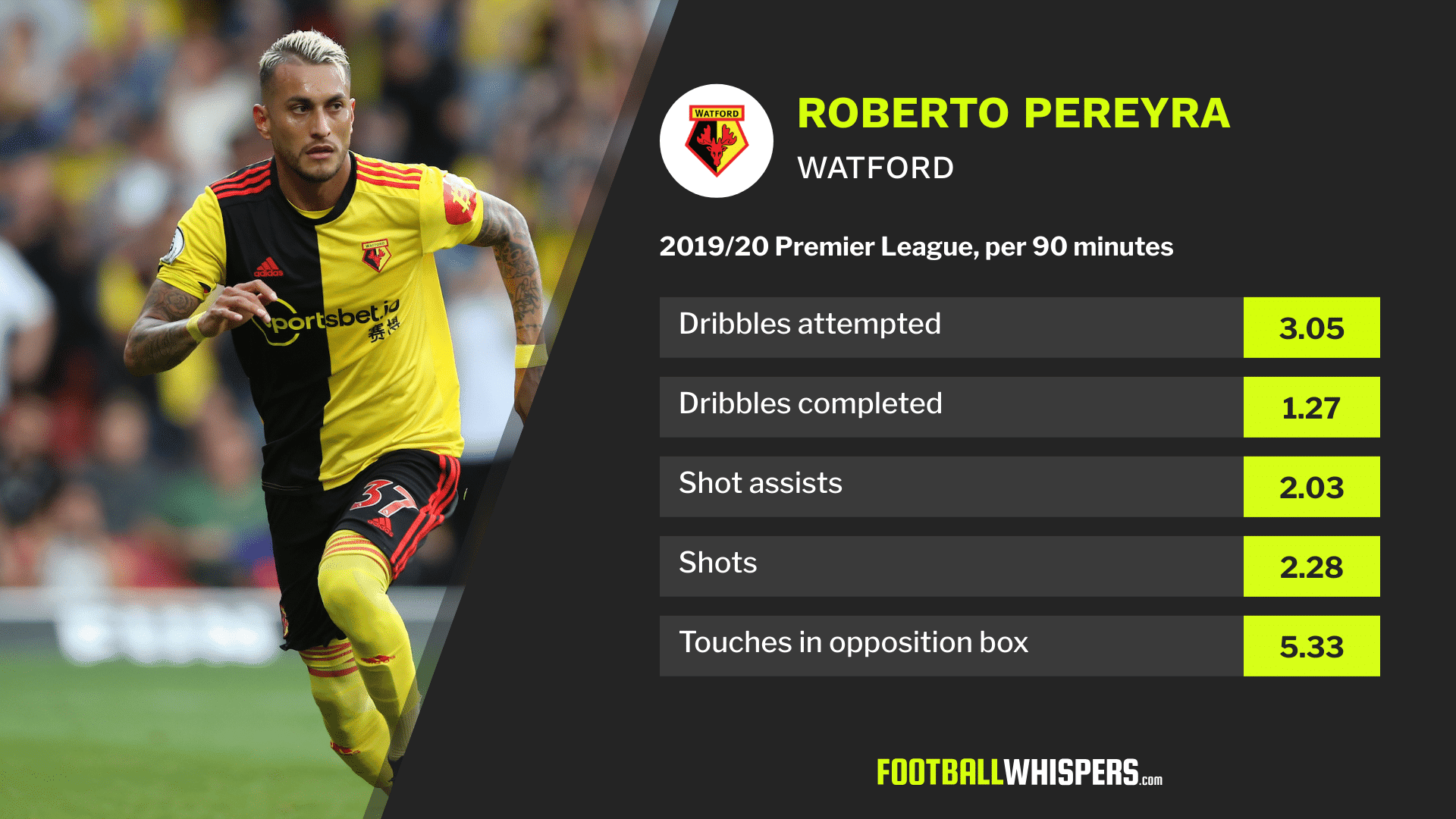 Despite Watford's winless start to the season, Pereyra is making a greater contribution than at any time in his Watford career. He is contesting (12.45 per 90) and winning more defensive duels (5.08) than in any of his four seasons at Vicarage Road while winning possession in the attacking third 1.52 times per 90 – again a career-best.

Whether or not Pereyra hangs around at Vicarage Road may be taken out of the club's hands. It's hard to envisage a full Argentine international with his pedigree sticking around in the Championship. But if Watford are to avoid that scenario, they need their divisive genius to remain.