The only surprise about Wolverhampton Wanderers striker Diogo Jota being linked with Manchester United is that it hasn't happened sooner.

The Red Devils' desperate need for a centre-forward is no secret. With Marcus Rashford‘s season hanging in the balance thanks to a stress fracture in his back, United signed Odion Ighalo on loan from Shanghai Shenhua until the end of the season.

Reports over whether the deal for the former Watford forward includes a purchase option are conflicting. Regardless, Ole Gunnar Solskjær has learned the hard way: he needs a third senior striker.

Already this season, United have been linked with a Wolves striker – Raúl Jiménez. Now, according to the Daily Express, Solskjær has turned his attention to the Mexican's strike partner Jota.

United scouts were in attendance last Thursday as Jota became the first player since Klaas Jan Huntelaar in 2012 to bag back-to-back hat-tricks as the Midlanders thrashed Espanyol 4-0 in the first leg of their last-32 tie. That treble took Jota's tally for the season up to 14 in all competitions, with nine of those coming in the Europa League.

After hitting three in the 4-0 rout of Beşiktaş before Christmas, the Portuguese forward repeated the trick against the Catalans on Thursday and was at the double as Wolves eased past Norwich City 3-0 on Sunday.

The validity of most rumours linking players with Manchester United are questionable. The kudos attached to being associated with one of the world's biggest clubs means frivolous rumours are inevitable. However, if we are to believe what we read, the Red Devils have been quick to latch onto whoever is hot at any given moment.

The 23-year-old was one of a clutch of players signed from more glamorous destinations in the summer of 2017. He arrived on loan from Atlético Madrid, having spent the previous season on loan at Porto, and was joined by Rúben Neves and Willy Boly (both Porto), Ruben Vinagre (Monaco) and Alfred N'Diaye (Villarreal).

Nuno Espírito Santo's side promptly swept all before them with Jota bagging a career-best 17 league goals and signing a permanent arrangement in January 2018. Neves, Boly and Vinagre all followed suit and, like Jota, all remain at Molineux to this day. 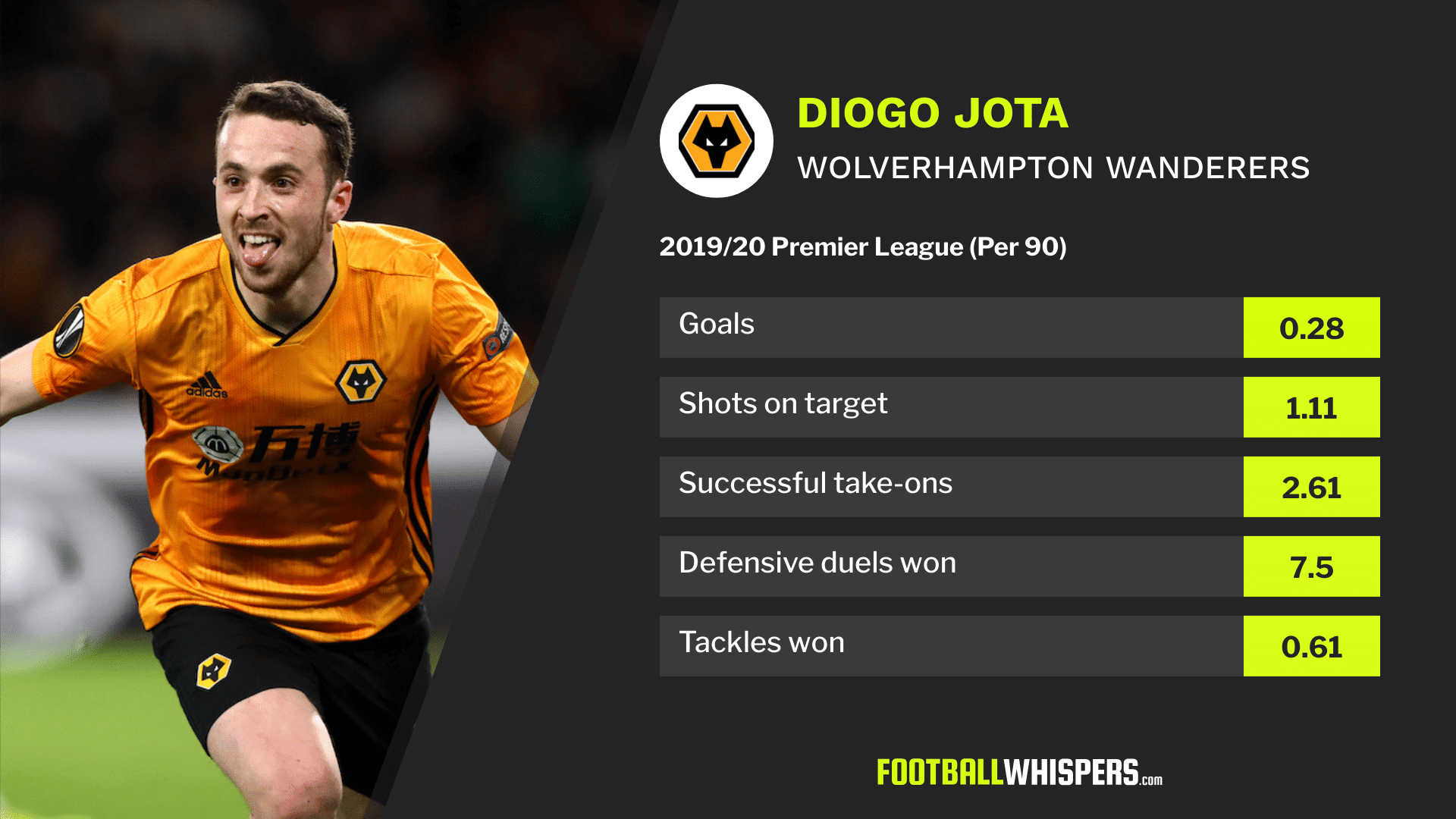 Jota has never repeated that goal tally but then he hasn't had to in order to justify his place in Nuno's starting XI. The Porto native is a great facilitator, working tirelessly alongside or behind Jiménez in Wolves' 3-5-2 or 3-4-2-1 systems. The majority of this season has been spent alongside the Mexican who tends to earn more of the plaudits.

But Wolves fans know that without the tireless running and selfless off-the-ball work of Jota, their No.9 and talisman wouldn't be anything like as effective as he has been. There's something of the Carlos Tévez, the former Old Trafford favourite, in the terrier-like playing style of Jota.

The Portuguese wins 7.5 defensive duels per 90, ranking 17th among forwards in the Premier League and wins three possessions in the middle third (per 90) to rank sixth. He is a constant menace to defenders and, as evidenced in the way he robbed and then left Virgil van Dijk red-faced at Anfield in December, a tenacious presser from the front.

There's no doubting Jota's quality and the fact he is unlike any forward Manchester United currently have. The question is how he would fit in at Old Trafford in Solskjær's preferred 4-2-3-1 system. Jota has the pace, strength and uses his body well enough to suggest he could lead the line on his own. But with Rashford and Anthony Martial already in situ, that's never going to happen. 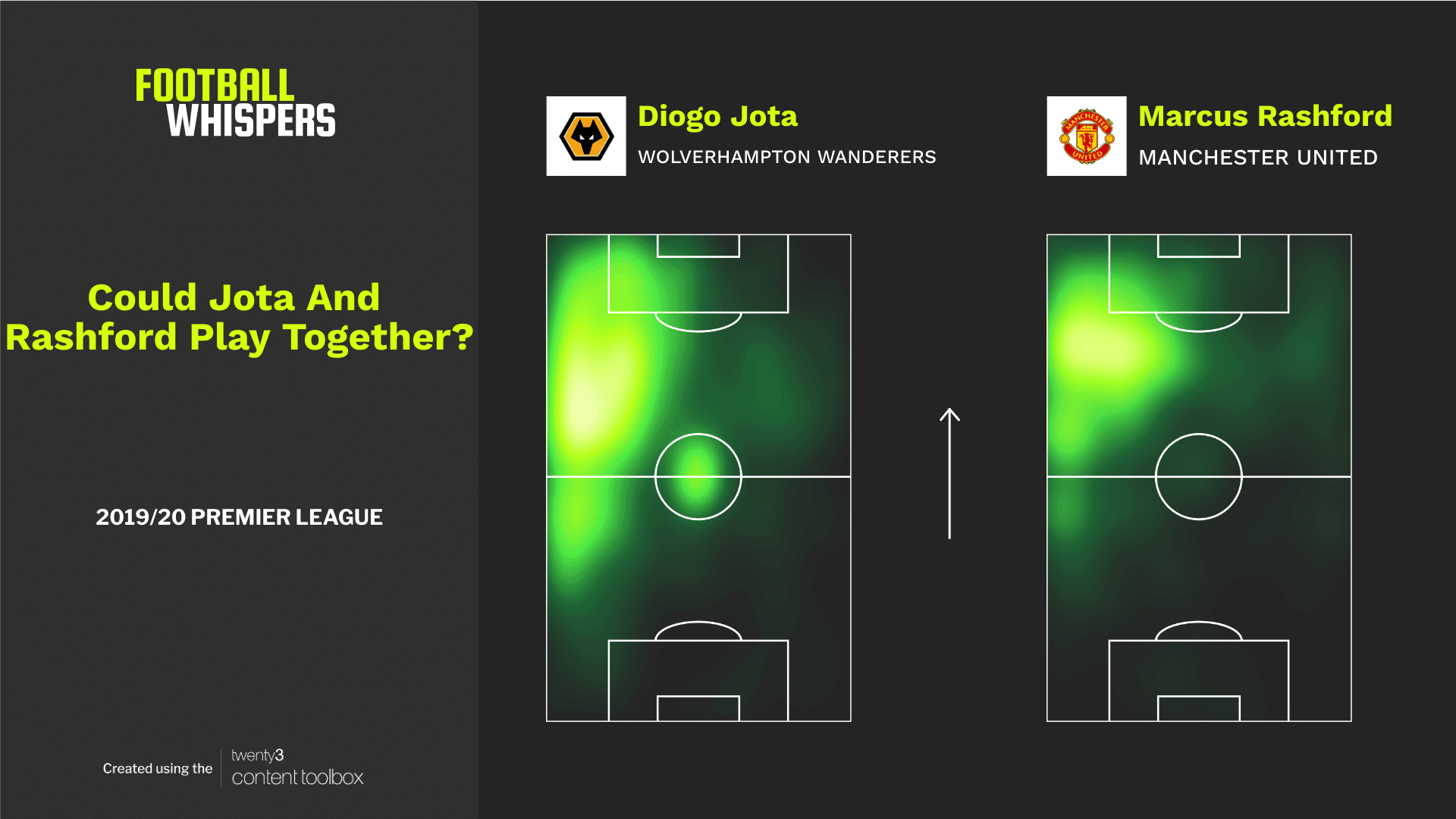 Furthermore – and this could prove even more of an issue – Rashford tends to drift out to the left-hand side – the same as Jota (see above). That is more than ever this season, with Solskjær frequently preferring Martial through the middle as a No.9 and Rashford on the left-hand side of the trio behind him.

There's also a question of how effective Jota would be without Jiménez alongside him. The former Benfica forward has been the main beneficiary of Jota's tireless legwork alongside him – though, curiously, Jota is yet to record a single Big Chance or assist this season.

A good player but a bad fit. Manchester United's search for a striker looks destined to continue…