Diego Maradona is a name that will always be mentioned in conversation when anyone is tasked with picking the greatest ever footballer.

As time goes on and new stars, like Lionel Messi and Cristiano Ronaldo are formed, it is going to become tougher and tougher to analyse and judge where they compare in the pantheon of the greatest players to ever to grace the game.

As each generation passes, fewer people will be able to say that they watched Diego Maradona destroy the England defence during the 1986 Mexico World Cup, or were dazzled by him as the Napoli crowd cheered him on against their own country in 1990.

Or if you are of a certain age, your first memory of this footballing god could be his energetic celebration for Argentina against Nigeria in 1994.

Whatever your memory of El Diego is, remember it, cherish it. This was before a time of the internet capturing every moment for posterity; small,  low-quality clips on YouTube are all the football fans of the future will be able to enjoy.

For someone regarded as a great of the game, his trophy cabinet is not as full as you would expect.

After winning the 1981 Argentinian Championship with Boca Juniors, he added a League Cup and Spanish Cup double with Barcelona in 1983, followed by the Super Cup in 1984.

But undoubtedly, his most successful club spell came at Napoli in Italy, with two league titles, the first in 1987, the second in 1990. He helped the southern side lift the 1987 Coppa Italia, 1989 UEFA Cup and Italian Super Cup in 1991, too.

These successes all pale into insignificance to his greatest triumph, though. How many footballers would trade in all their medals for the chance to lift the World Cup for their country?

He did that in 1986 and achieved it without a squad of superstars beside him and that is why Diego Maradona was named as one of Football Whispers' Top 10 Number 10s, and you can see the full list here.

Sadly, despite his unquestioned genius on the pitch, as his career continued, the emotional and volatile Maradona became equally known as a figure of controversy.

Drug problems, apparently starting in Spain, led to a 15-month suspension in 1991. Then, that iconic image of a rage fuelled Diego in the USA sparked another positive drug test.

For everything that he accomplished both on and off the pitch and even during his post-playing career, it’s astonishing to think he’s still not reached his 60s. Although with many health issues, it may come as a surprise he’s reached this age at all.

Love him, or hate him 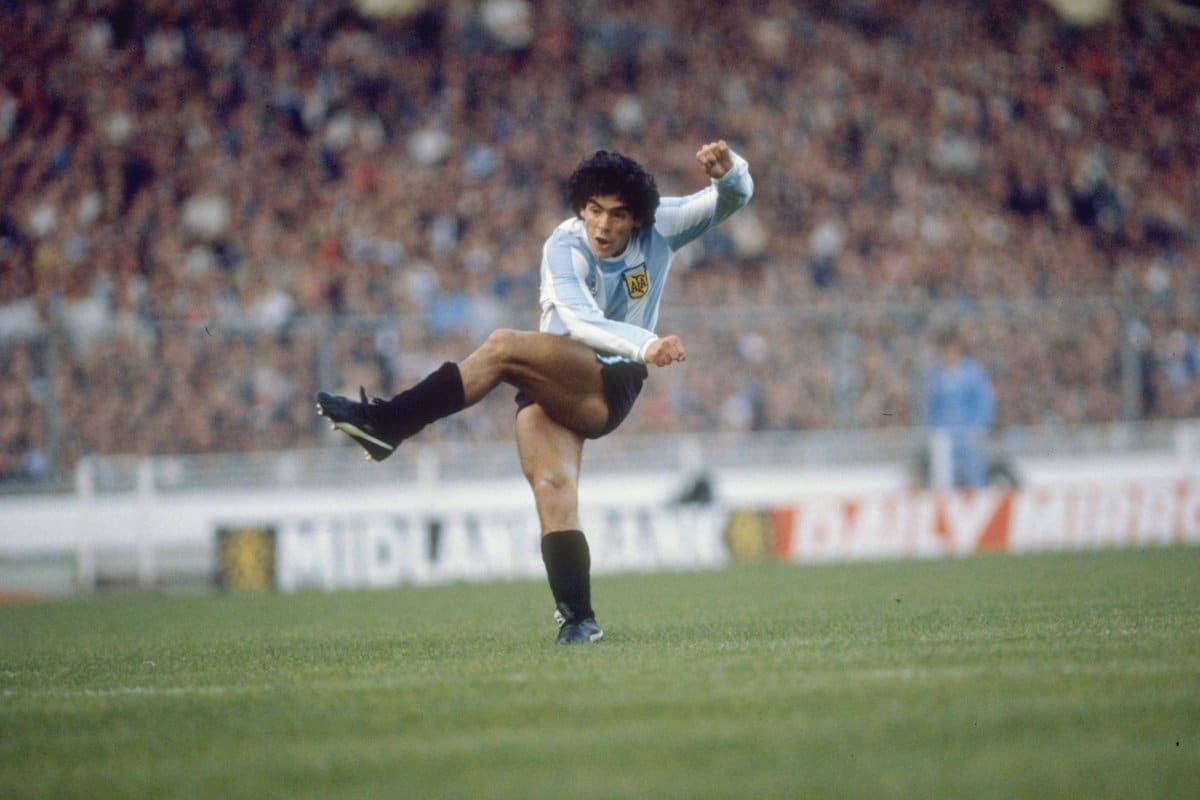 Few players on a global scale have inspired as much admiration and derision as Maradona. Amazingly gifted with the ball at his feet, it wasn’t so much his dazzling tricks and flashy skills, rather than an unstoppable ability to change direction and then power past defenders as if they were not there that set him apart.

At his best, he could take a whole team on his shoulders and drag them through a competition or league season without a second thought.

Fans in Argentina, Spain, Italy and … Scotland, regard him as a world-beater and one of the best to grace the game. In England, he is seen as a disreputable cheat with dubious political affiliations and a penchant for drugs…but also as genius.

That one fixture, well moment, in 1986 will split everyone until the end of the world: Argentina 2, England 1.

Steve Hodge, after intercepting Maradona’s pass aimed for Jorge Valdano, hooked it back towards his own penalty area. Little Diego, continuing his run into the box, took his opportunity, leaping up to challenge goalkeeper Peter Shilton, he punched the ball into the net with the outside of his left hand.

“A lot of England fans I speak to still blame Maradona and still hold a grudge all this time later – and you can see why,” said former England international, Chris Waddle on the 25th anniversary of the goal in 2011.

However, just five minutes later, the stocky forward would score a goal that no one, even his most hated enemies, can help but respect and enjoy.

Picking up the ball in his own half, he turned and began a devastating run, one that would finish with perhaps the greatest goal ever scored, dribbling past five English defenders before slotting the ball beyond Shilton.

During that World Cup, he would net three other goals and set up another five as Argentine clinched the trophy. Tellingly, the haven’t won the football's greatest prize since his exploits.

Maradona is remembered for the dazzling highlights, but also the terrible lows; his passing ability if often forgotten because he was the only star on any team he ever played for. His five assists demonstrate that he had the vision and talent if given the supporting cast.

You can only close your eyes and dream about what he could have achieved if you put him in the current Barcelona team with Luis Suárez and Messi, or link him with Gonzalo Higuaín in the Napoli sides of the past.

As time goes on and memories of Diego’s greatness fade, never forget that behind the non-footballing exploits, there was an incredible player in amongst the well-documented troubles.