The mantra that you should bow out while you’re on top is as true in football as it is in wider society.

Just as everyone remembers classic sitcom Fawlty Towers for twelve near-perfect episodes and iconic musician Jeff Buckley for one sensational album, players and managers who depart from a club at their peak often leave a legacy that can never be tainted.

Diego Costa’s reputation in the Premier League certainly falls into that category, with memories of an impressive yet controversial spell at Chelsea etched into the minds of football supporters across the country.

The Brazil-born striker scored 52 top-flight goals in 89 league games for the Blues between 2014 to 2018, helping them to two Premier League titles and a League Cup. He then fell out with manager Antonio Conte and soon returned to former club Atlético Madrid.

His time in England was not without incident and included a three-match ban for stamping in 2015, but it’s fair to say his era as Chelsea’s frontman will largely be remembered as a success.

It is perhaps no surprise then, that Everton have been linked with a move to bring Costa back to the UK this summer, as they look to fill a striker-shaped hole in their squad ahead of next season.

But will they be signing the same forward that departed for the Spanish capital in 2018? Costa’s initial spell at Los Rojiblancos between 2010 and 2014 was a resounding success, and his 43 goals in 94 league matches were the catalyst for a £32million move to Chelsea.

But his latest stint under Diego Simeone has been far less fruitful – the 30-year-old has found the net just four times in 29 LaLiga games, and now looks set to leave Madrid having been unable to recapture the goalscoring form that many had come to expect from one of the world’s fiercest strikers.

Everton are not currently at the same level as Atlético Madrid – the Spanish giants are firmly in Europe’s elite after a decade of continental and domestic success. The Toffees are still trying to break into England’s top six after a transitional season in 2018/19.

But while that gap between the two sides should caveat any analysis of whether Costa would be a useful addition at Goodison Park, it’s hard to ignore how strongly the statistics indicate that the striker is a shadow of his former self. 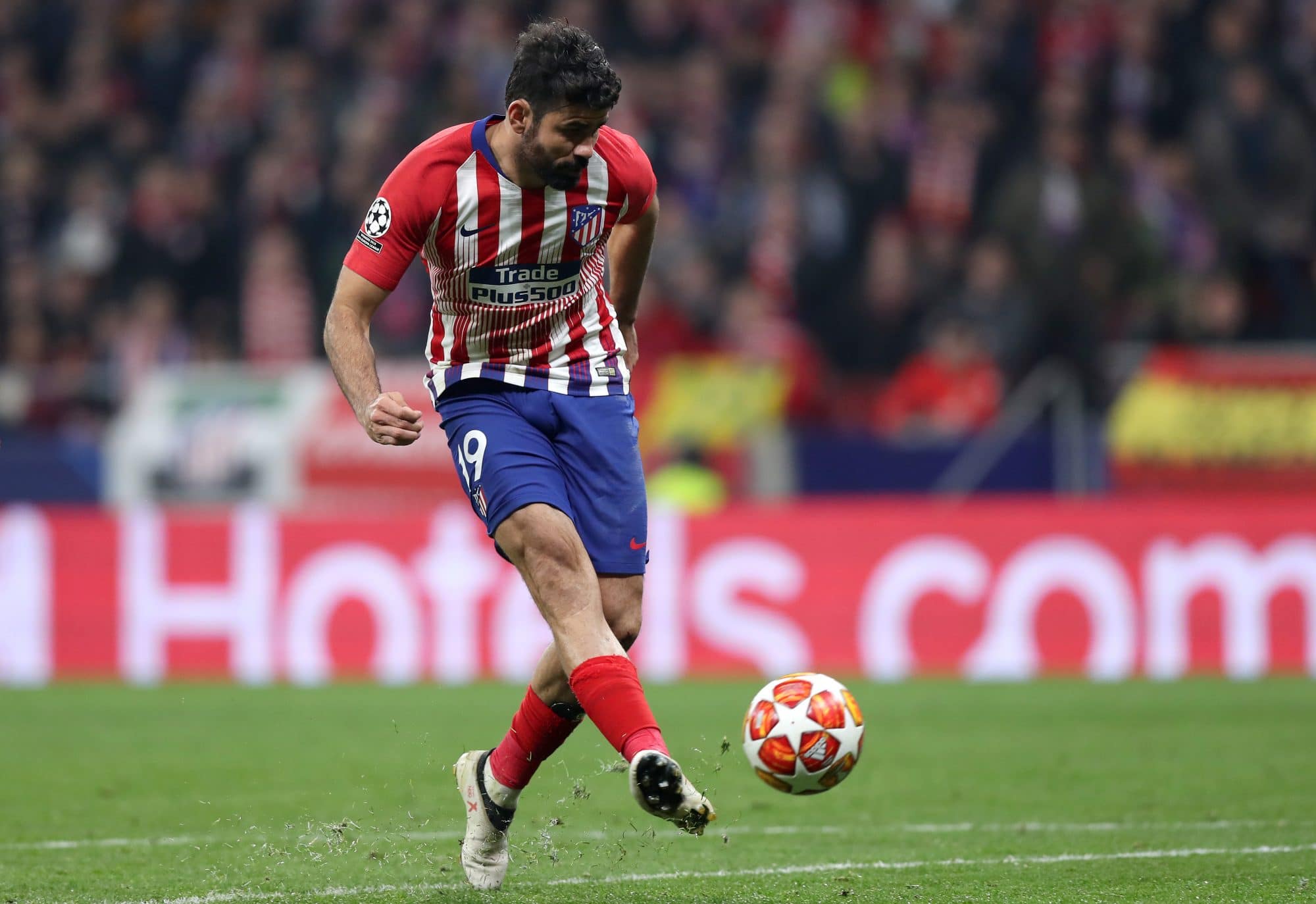 If we look at the Spanish international’s performances in LaLiga over the past two seasons, the thing that immediately jumps out is how closely Costa’s expected goals (xG) tallies with his actual output.

The forward’s xG across both campaigns was 5.1, which is only one goal more than the four league strikes he has recorded since returning to Atlético. This indicates his unimpressive record isn’t a fluke or a result of bad luck, but a fair reflection of his contribution while out on the pitch. His shots lack quality, and he isn't getting into dangerous areas often enough.

There’s very little about the rest of Costa’s data from the same period to suggest he has impressed in other areas. His number of touches in the opposition box was just 5.07 per 90 minutes played over the past two seasons, which sees him ranked 30th when compared to other forwards in LaLiga during that time.

It’s a similar story when it comes to shots on target – Costa’s record averaged out at less than a shot on target a game (0.83), which was bettered by over 50 forwards in Spain’s top tier. 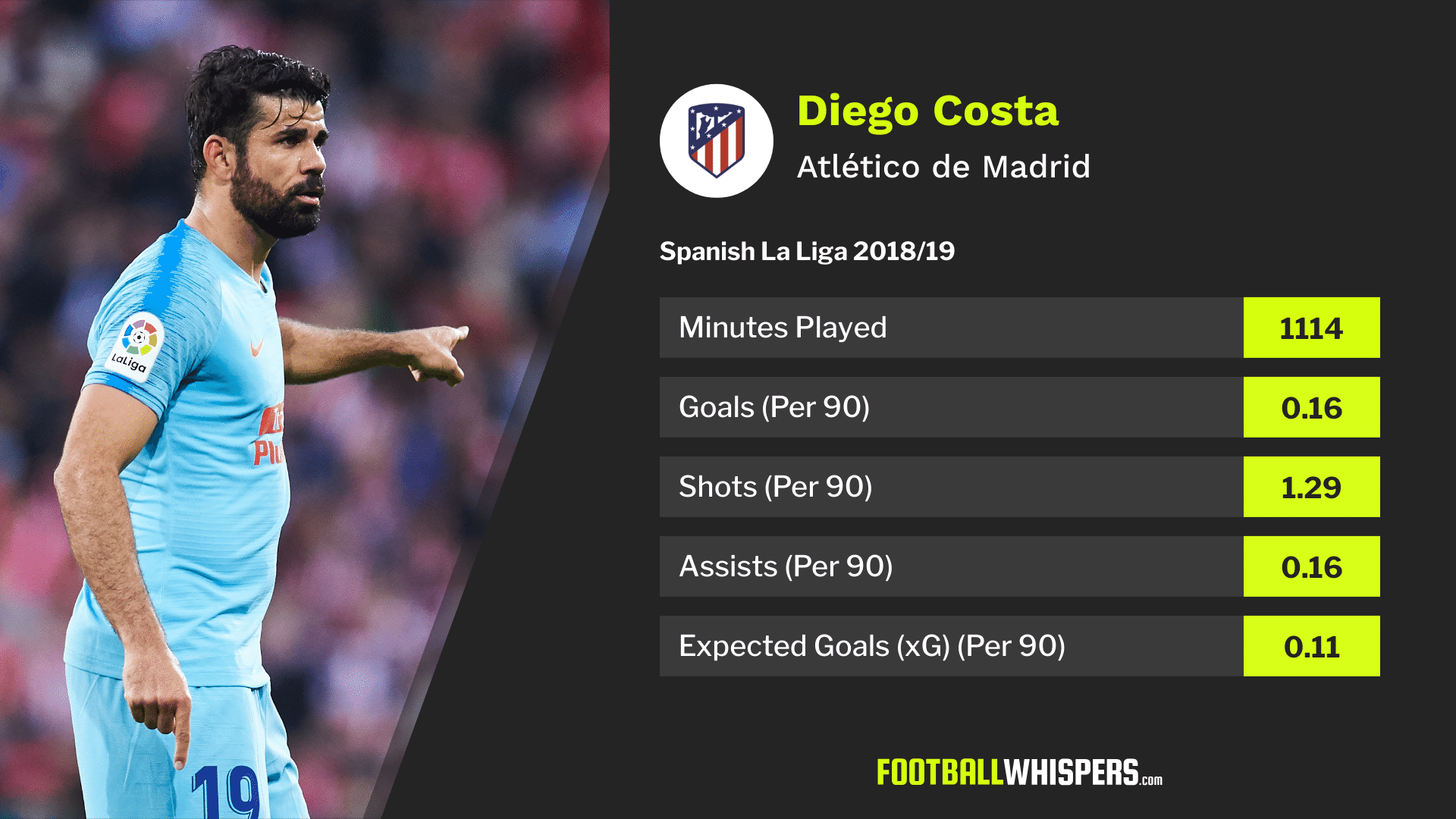 While only 1.04 dribbles completed per 90 minutes (the 40th best of all La Liga forwards) reflects a lack of dynamism in Costa’s game, there is some better news when it comes to bringing his teammates into play.

His assist rate of 0.2 per 90 minutes over the past two seasons was only bettered by 14 other strikers in his division, and he ranked 17th for big changes created (0.33 per 90 minutes).

So while he may be struggling in front of goal, Costa still seems to be operating quite effectively as a foil for the players around him.

The question is whether that’s enough to warrant Everton parting with a sizeable sum of money to make the former Chelsea man their flagship signing this summer.

Atlético will undoubtedly be looking to recoup a significant portion of the reported £57million that they paid for him two years ago, but unfortunately the evidence to suggest that he is still worth anything close to that fee is pretty thin on the ground.

People will point to Costa’s impressive goal record throughout his career and his previous success in England as reasons why this could be a smart piece for business for Everton. But to do so is perhaps somewhat nostalgic and underestimates his drop off in form since returning to Madrid.

It would be a major gamble from the Toffees, and not one that’s worth taking.