There will always be a special place in the hearts of Chelsea fans for Diego Costa, one of the Premier League's greatest pantomime villains.

During his time in English football, Costa was hotheaded, aggressive and, at times, just plain nasty. He was a striker who would throw an elbow into the sternum of a defender without a moment's hesitation. A one-man wrecking ball intent on destruction.

Costa always played on the edge, was always seconds away from hulking out. Yet if he could control the beast inside, what a player he was. He could bully an entire defence single-handedly, could drag the Blues to victory through sheer force of will.

Chelsea won two titles during Costa's three seasons at Stamford Bridge and his goals crucial to those successes. He struck 20 times in 26 games under José Mourinho in 2014/15 and hit 20 again in 2016/17 under Antonio Conte.

Of course, there were the histrionics, the suspensions, and even a strong flirtation with the Chinese Super League during his last campaign in west London. But Chelsea fans were always prepared to forgive his missteps.

Antonio Conte didn't, however. And in the summer of 2017, just a few short weeks after the Blues had clinched their fifth Premier League title, the Italian coach effectively ended Costa's Chelsea career with one simple text.

“Hi Diego, I hope you are well. Thanks for the season we spent together. Good luck for the next year but you are not in my plan.”

Conte placed Chelsea in an unedifying position. They had to back their title-winning coach and Costa was first ostracised from the first-team squad and then ordered to train with the club's under-21s.

The Spain international, meanwhile, went on strike in an attempt to force a move away from Stamford Bridge. He wanted to return to Atlético Madrid, the club he'd left for Chelsea. In September 2017, Costa's wish was granted and the two sides agreed a £50million fee for the then 28-year-old.

Chelsea fans were unhappy with Costa's departure, which was officially completed on January 1, 2018. Their inconsistent form certainly didn't help, neither did the patchy performances of Álvaro Morata, the man bought into replace the Brazil-born star. 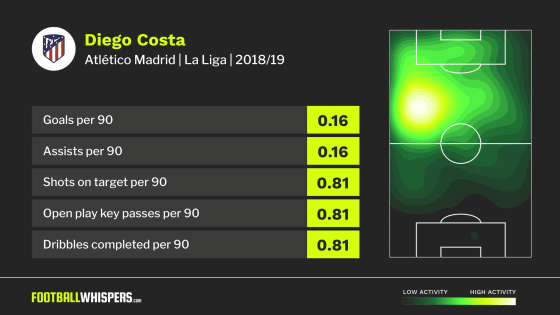 However, hindsight is a wonderful thing. And less than 18 months on from Costa's drawn-out farewell, Chelsea fans may believe they got the better end of that deal.

Costa, now 30 years old, has struggled since making his return to Madrid. He has struck just five La Liga goals and twelve in total. Injuries have played their part – he has played just 1,530 minutes this term – but they can't excuse the ineffective displays.

His movement is lacklustre, his touch heavy. Of course, there are moments when the old Costa batters through his now weary shell but they are fleeting and increasingly rare.

What remains, though, is the temper. Costa has twice as many yellow cards in La Liga this season than goals and on Saturday, against Barcelona, in a game which would keep the title race alive or kill it dead, he was sent off after just 28 minutes for insulting the referee's mother.

Atléti boss Diego Simeone is one of Costa's greatest defenders. Yet even he offered little support after Barcelona's 2-0 victory. “I asked the referee at half-time, ‘Was what he said so bad?’ If it was then the sending off is the right decision.”

Costa's future at Atlético is far from certain. Rumours persist that he will be moved on this summer if the right offer is made; the Madrid-based club hope interest from the Chinese Super League remains.

His Chelsea legacy, however, is untainted. It may have even grown since his departure, in truth. The Blues have never replaced Costa. Morata struggled during his 18-months at the club and Gonzalo Higuaín, signed on loan in January, has only three goals to his name.

Yet, as discussed above, there is evidence to suggest Chelsea sold Costa at exactly the right time. Yes, they may have been able to eke one more season out the battering-ram forward but he certainly wouldn't have fit in under Maurizio Sarri and wouldn't have commanded such a fee when on the cusp of his thirties.

So while it was difficult to accept at the time, Conte may have done Chelsea a favour by moving on Costa. Unfortunately, the club didn't make the most of it.