When you are a young player coming through the ranks of Lyon it is assumed you are another product of their amazing youth academy. Chelsea transfer target Mouctar Diakhaby is a little different.

Born in Vendôme, about 170km south of Paris, he grew up in the Malakoff district of Nantes. Playing football on the banks of the Loire river an eight-year-old Diakhaby began his career at local side USSA Vertou.

Once he turned a teenager in 2009, FC Nantes pounced. Another club with a famed youth set-up, that should have been his break. Developed at the same club as Claude Makélélé, Mickaël Landreau, Marcel Desailly and Didier Deschamps, there are not many places better to nurture your talent.

However, Les Canaris didn’t use the youngster, and when they did he was playing as a forward or a wide midfielder. Diakhaby returned to Vertou with his tail between his legs.

As a 15-year-old, he was playing in the Under-19 league, and after impressing scouts he would go on trial with Rennes, Angers, Niort and again, Nantes. Yet, the report card concluded he was un peu gentil dans les duels, too soft going into tackles, not something you want from a kid playing in defensive midfield.

Niort wanted to take a gamble, guaranteeing Diakhaby a contract, but he is described as being strong-willed and decided to take a chance by going on trial at Lyon.

Chamois Niortais wouldn’t have been the easy way out, but Lyon’s formidable Tola Vologe training centre is youth football on expert mode.

But Diakhaby stepped up to the test. After three seasons between the Under-19s, CFA (fourth division) and UEFA Youth League, he had blossomed into a France youth international at Under-19 and Under-20 level and, in August 2015, he was handed his first professional contract.

“He may look nonchalant at first, but he has great determination, good ability to recover and an impressive physique,” Lyon’s Under-19 coach Joël Fréchet told 20minutes.

At the start of the 2016/17 campaign, the defender was expected to start behind Mapou Yanga-M’Biwa, Jérémy Morel, Nicolas Nkoulou and highly-rated Argentine centre-back Emanuel Mammana. 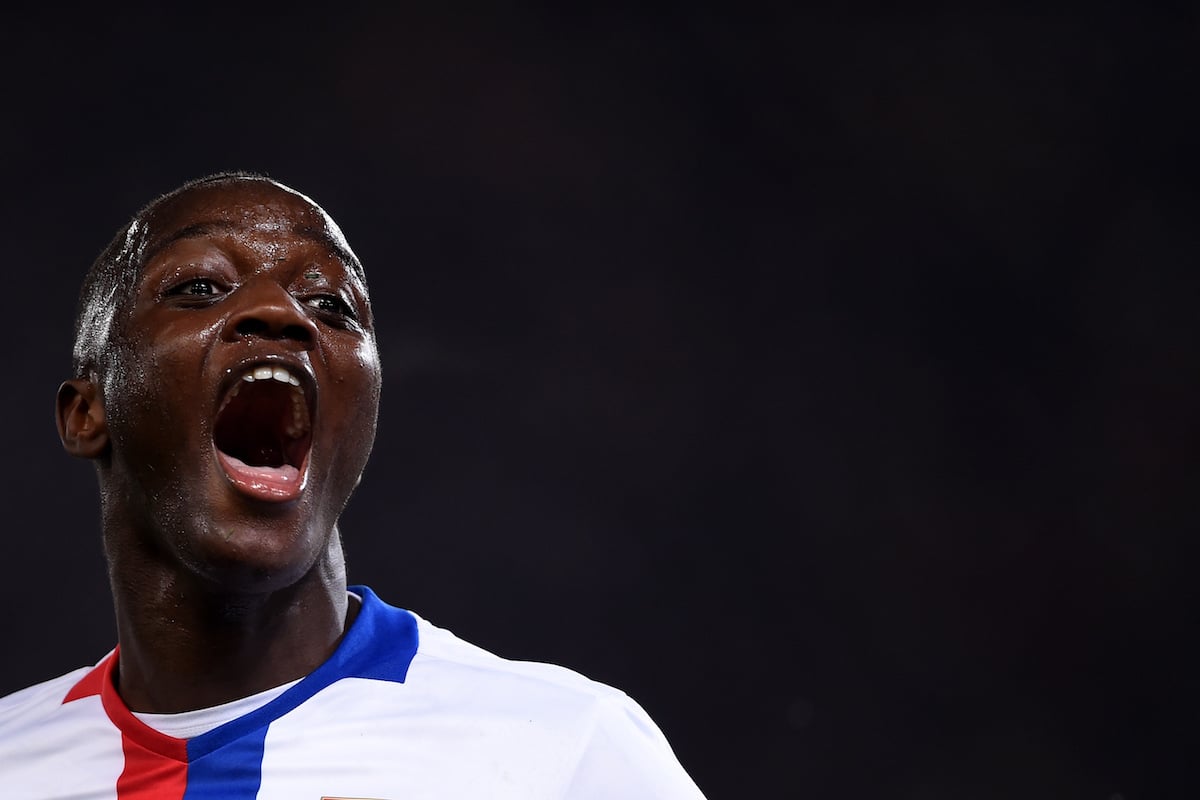 Although fifth-choice, injuries to those in his way benefitted him and Bruno Genesio’s use of Maciej Rybus in midfield moved Morel to left-back meaning Diakhaby got his chance.

Handed his first Ligue 1 start in the week four at home defeat to Bordeaux, things did not work out.

That was not his fault, he made a good impression, but wouldn’t feature again until the 1-0 loss to Juventus in the Champions League in December.

Slowly he edged his way into the line-up, mostly at the expense of Nkoudou as the former Marseille captain’s form dropping worryingly. The then 19-year-old didn’t need asking twice and he would go on to feature 22 times in Ligue 1 and established himself as Mammana’s partner in the Lyon back four.

It was a summer of change at OL and the Argentine defender was sold to Zenit St, Petersburg for a profit – perhaps a sign of the club’s faith in their home-grown starlet.

Lyon splashed out £45million, adding Marcelo at centre-back, two left-backs and Kenny Tete from Ajax on the right.

Diakhaby has found himself behind Marcelo – who joined from Besiktas – and the more experienced Morel, but his numbers are impressive when he is given the nod. 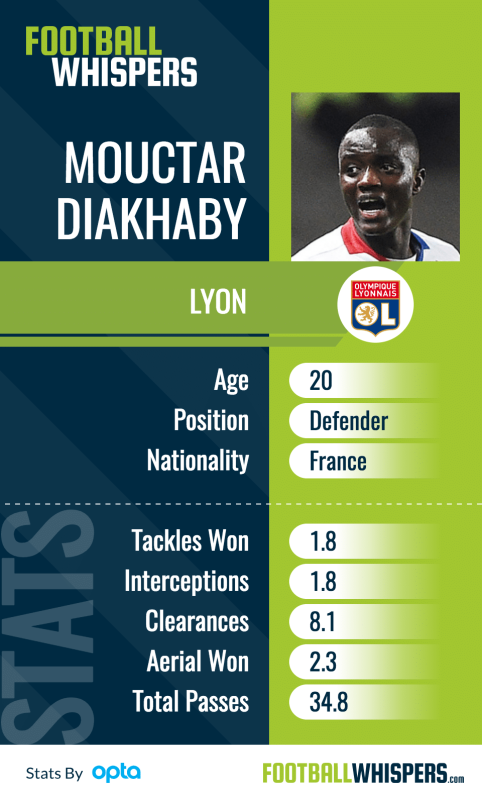 Completing more tackles, interceptions and clearances, he has handed over his passing duties to the other centre-backs, attempting fewer passes and long balls, but it’s a side of his game that can’t be forgotten.

Capable of hitting long searching balls, a key part of Lyon’s game plan, he showed in the recent Europa League win over Everton that he can thread neat precise balls down the channels too.

At 6ft 3in he’s tall, but looks skinny, using his long legs to break up play and gallop up and down the pitch.

Rather than being one of those physical specimens who can’t use their size to their advantage, Diakhaby is great in the air and makes sure he’s active at set-pieces. As well as his height, he has a good leap and hangs in the air to good effect.

What is underrated is his speed across the ground and his ability to recover. His positioning needs work – it’s one area the 20-year-old will improve over time – but he is deceptively quick and able to turn a bad situation into a great defensive action. 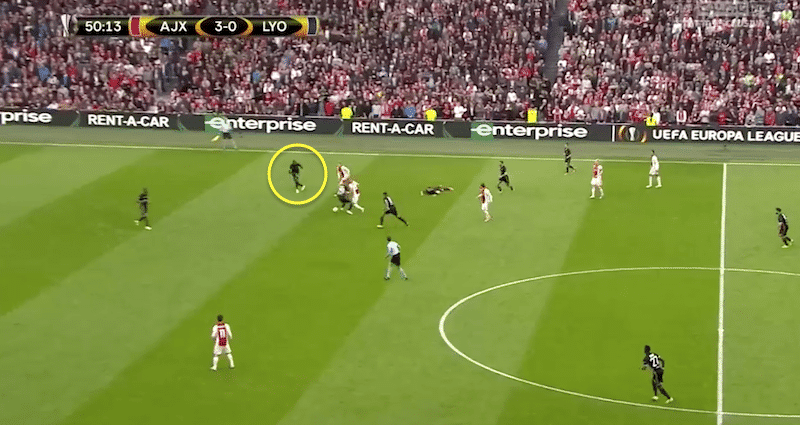 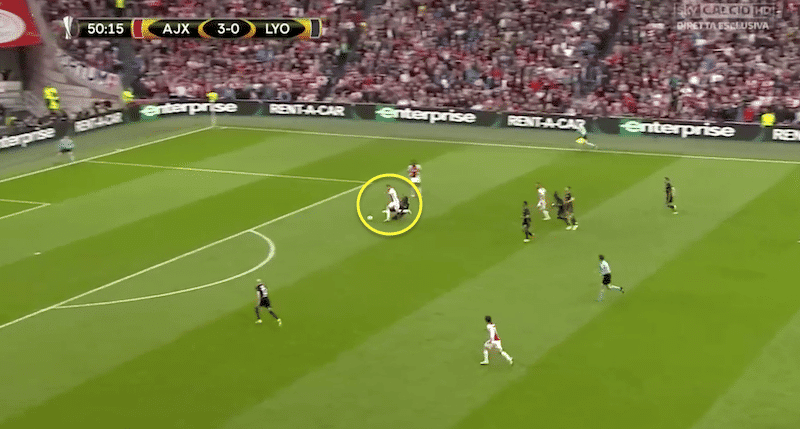 Playing against Ajax in the Europa League, you can see above that he has found himself out on the left and Kasper Dolberg is looking to pounce. Diakhaby sees the danger, he reacts and makes a great tackle to stop the talented Danish forward.

For a true indication of the pace he has in his legs, you need to witness his amazing recovery tackle against Besiktas last season. 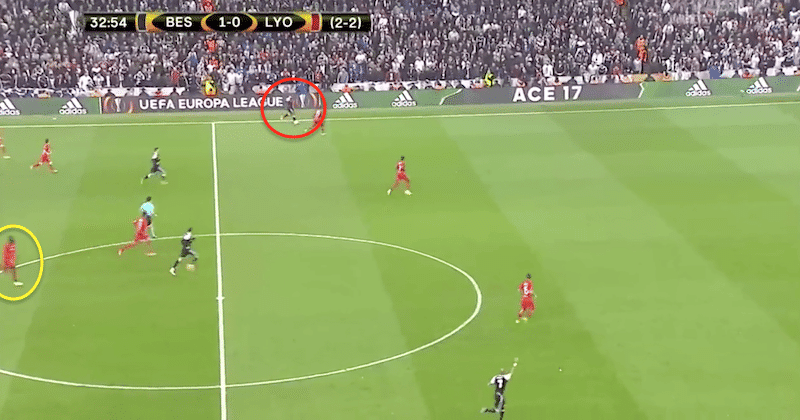 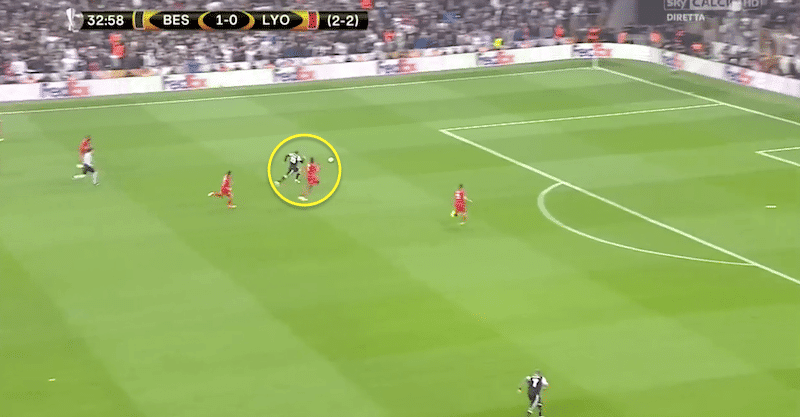 Losing possession from a set-piece, the Turkish side are attacking with pace and have a potential 4v3 situation as the young defender scrambles to save the situation.

Within four seconds he has sprinted back, overtaking four team-mates and tracking the dangerous run through the middle. Once in position he makes a fantastic tackle to end the attack and keep Lyon from going 2-0 behind.

It’ll come as no surprise that Premier League clubs have expressed their interest. The latest news sees him linked as a Chelsea transfer target and there are suggestions Pep Guardiola will use Eliaquim Mangala as a makeweight to lure the defender to Manchester City.

In August, Lyon took the first step in protecting their asset by handing him a new contract until 2022. That will fend off the vultures momentarily as well as guaranteeing OL will receive a huge fee when they do decide to sell.

OL will see Diakhaby as the natural replacement once Morel, who is 33 years old, steps aside.

Jean-Michel Aulas is one of the toughest presidents to deal with in Europe. When he has the high-ground, he’s almost impossible.

No one doubts that the 20-year-old, who cites Raphael Varane as a player he looks up to, will eventually call England home. But Chelsea and Manchester City will have to wait a little bit longer.