Watford fans have never been under any illusions when it comes to Gerard Deulofeu. Their union is a marriage of convenience.

Any player gifted enough to have been schooled at Barcelona has little business at Vicarage Road. That much is clear. Yet that is where Deulofeu has found himself since January of 2018.

Initially signed on loan by the Hornets in January last year, the 25-year-old made the switch permanent six months later after impressing in seven outings before injury curtailed his time in WD18.

Last season was the best of the four-cap Spanish international's career. He scored 12 times in 34 appearances in all competitions. It was his moment of magic (below) which brought Watford back into their FA Cup semi-final against Wolverhampton Wanderers before sealing the Hornets' final spot with a second in extra time.

This season has not been as impressive for either Watford or Deulofeu. The Hornets only recorded their first Premier League win prior to the international break with their talismanic No.7 breaking his goalscoring duck in defeat to Chelsea, ending a run of 26 efforts without scoring this season. No top-flight player had taken more shots without netting.

Clearly, being mired in a relegation battle is not where Deulofeu sees himself. He's turned out for Barça at first-team level on 23 occasions, as well as representing Sevilla and Milan.

According to his agent, Albert Botines, Deulofeu still has ‘strong ties' with the Rossoneri. Speaking to Sky Sport Italia, Botines said: “He has signed a new five-year contract at Watford and is tied to the club for a long period. He had a great campaign last season.

“His ties to Milan remain very strong and one day he might return,” Botines added.

“We need to see how things evolve. The Milan fans are still writing to him on social media, telling him to come back. Gerard enjoys Serie A and Italian football, so that’s why one day something might happen.” 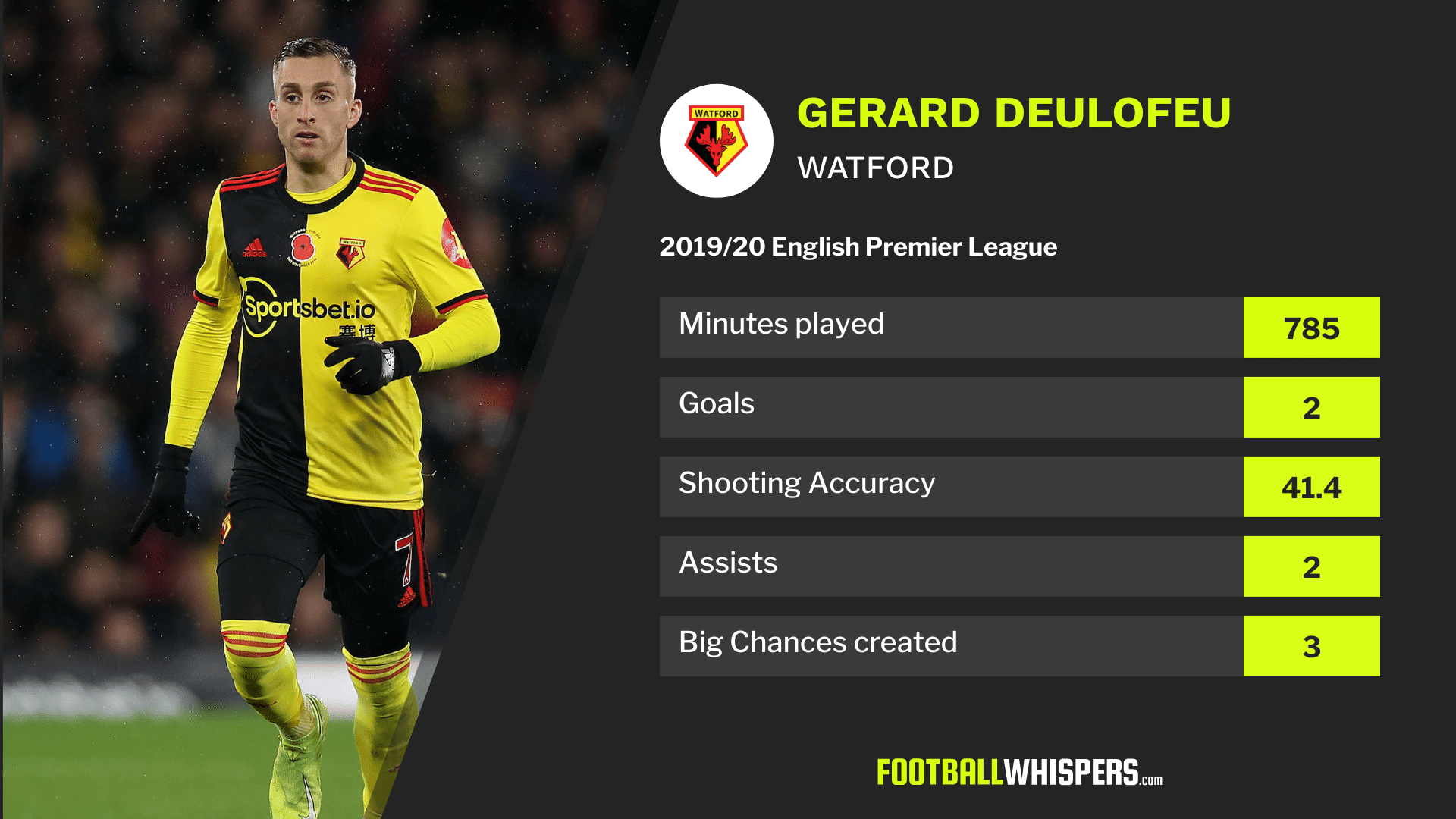 The threat of losing Deulofeu to a bigger club has been virtually ever-present during his time at Watford. It's understandable given he rubbed shoulders with Lionel Messi, Luis Suárez and Andrés Iniesta as recently as last year.

Equally, there's a reason his career path reads: Barcelona, Everton, Sevilla, Everton, Milan, Barcelona, Watford. While Deulofeu's ability has never been in doubt, his decision making, consistency, work-rate and teamwork have. It's not enough to win the odd game single-handedly as he did in the FA Cup semi-final against Wolves. It'll be forgotten in time but Deulofeu was left on the bench in that match until Watford fell 2-0 behind.

His profligacy in front of goal is just one part of that. An average of 3.32 shots per 90 put Deulofeu 12th among Premier League forwards. Better still, 1.37 hit the target, enough to rank tenth. Yet his expected goals (xG) total for the season stands at just 2.13 which says he is shooting from low-value positions.

That is evident from Deulofeu's open-play xG map, below, which ascribes a difficulty to each of his 29 efforts this season based on their position, distance from goal and so on. 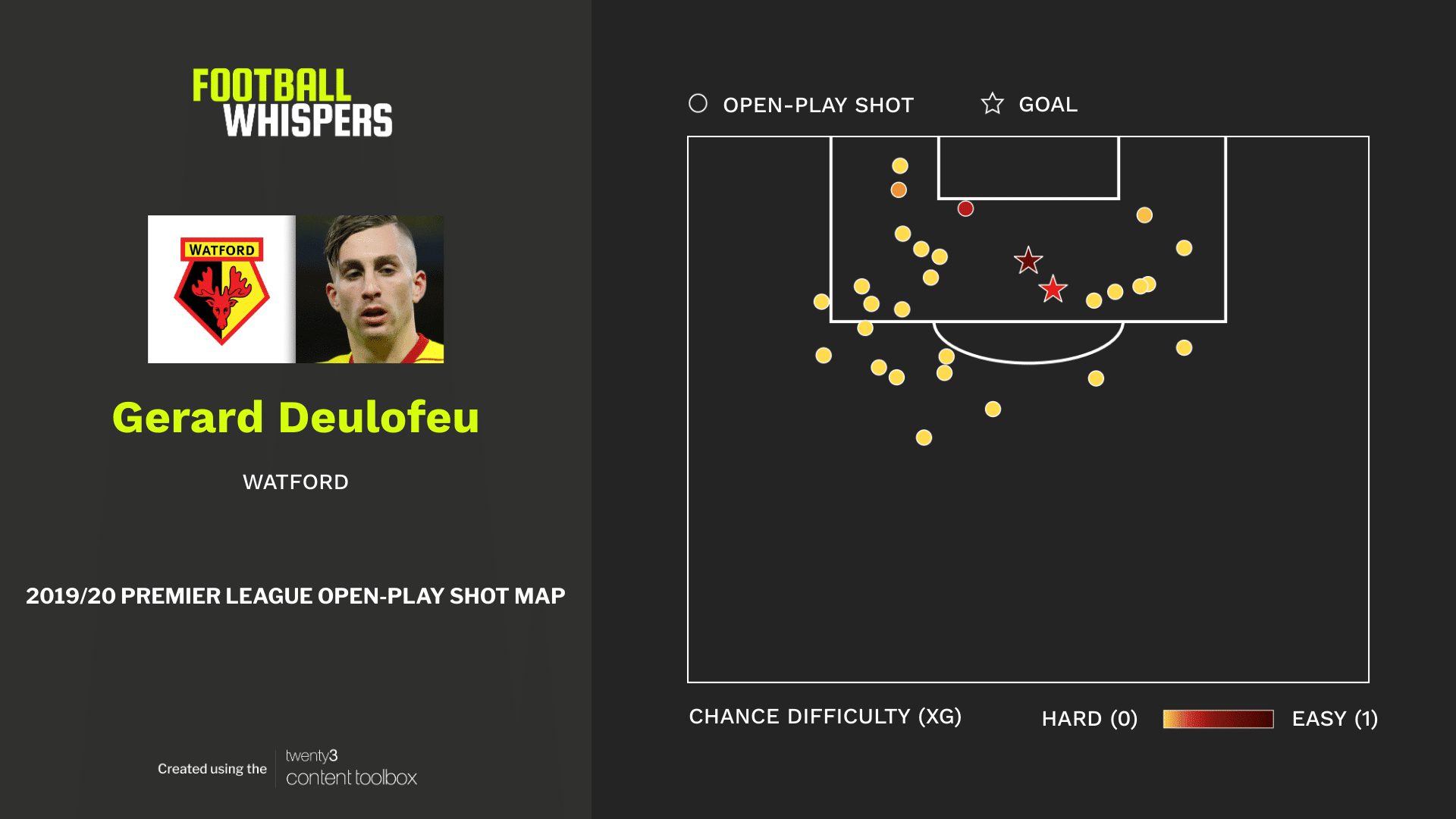 Armed with that information, it's easy to see why Deulofeu's xG total is so low. He is taking the majority of his shots from wide of the two posts, reducing the angles dramatically. He's also yet to take a shot from inside the six-yard box this term.

Deulofeu loses possession an average of 17.39 times per 90 – no-one who has played regularly at Watford this season is dispossessed more often. But none of the tricksy wideman's peers have his same magic in their boots as Deulofeu. His tendency to pick the wrong option is the pay-off for the mesmerising moments he delivers, such as his Wembley double.

Yet there is still a sense the La Masia graduate could do more. Until that abates, he is destined to remain on the cusp of true brilliance at clubs he might well deem beneath him.

Speaking in March, the Catalan enigma outlined his ambition to play for one of the ‘best teams in Europe'.

“I’m the type of player who wants to succeed and wants to be in the best teams of Europe,” Deulofeu told The Times. “I want to be a really good player in the world. For this, you have to dream.

“Watford, to be realistic, is a great team but it’s not a top team. Let’s see what happens but at the moment I respect Watford and I’m so happy here.”

The challenge now is to find the kind of consistency which he has lacked throughout his career. If he can knuckle down and show it, there will be no shortage of big clubs queuing up for his signature and Watford, given their propensity for polishing up rough diamonds, will be only too happy to sell.