Unbeaten, with just a Mile Jedinak penalty conceded and 18 outfield players used in the group stage, France appear to be in prime shape heading into Saturday’s last 16 glamour clash against Argentina.

With full-backs Benjamin Mendy and Djibril Sidibé playing in the final match of Group C against Denmark, Didier Deschamps has a fully-fit group of players to choose from ahead of the meeting with La Albiceleste at the Kazan Arena.

Argentina also remain a mess. A discordant dressing room where Lionel Messi seemingly in charge and leading team talks and a defence with calamity around the corner.

However, what appears to be a positive start and favourable draw for the French is far more nuanced. The same problems remain for Deschamps’ team and the real concern is that the group stage failed to show any signs they will be solved.

France’s production line of talent over the last five years has been bordering on the ridiculous. In theory, Deschamps could take three different squads with him to Russia and all would be competitive, even ignoring the gems that lie in the under-21 and below youth set-ups.

But that has carried its own problems for the 1998 World Cup winner since taking the job in 2012: namely, with so much to choose from he has struggled to establish his best XI and favoured system for getting the most out of his players.

There’s nothing wrong with constant evolution – just ask Joachim Löw whose loyalty to his 2014 champions has been significant in their early exit – but the uncertainty in selection means Deschamps has been unable to truly develop Les Bleus. 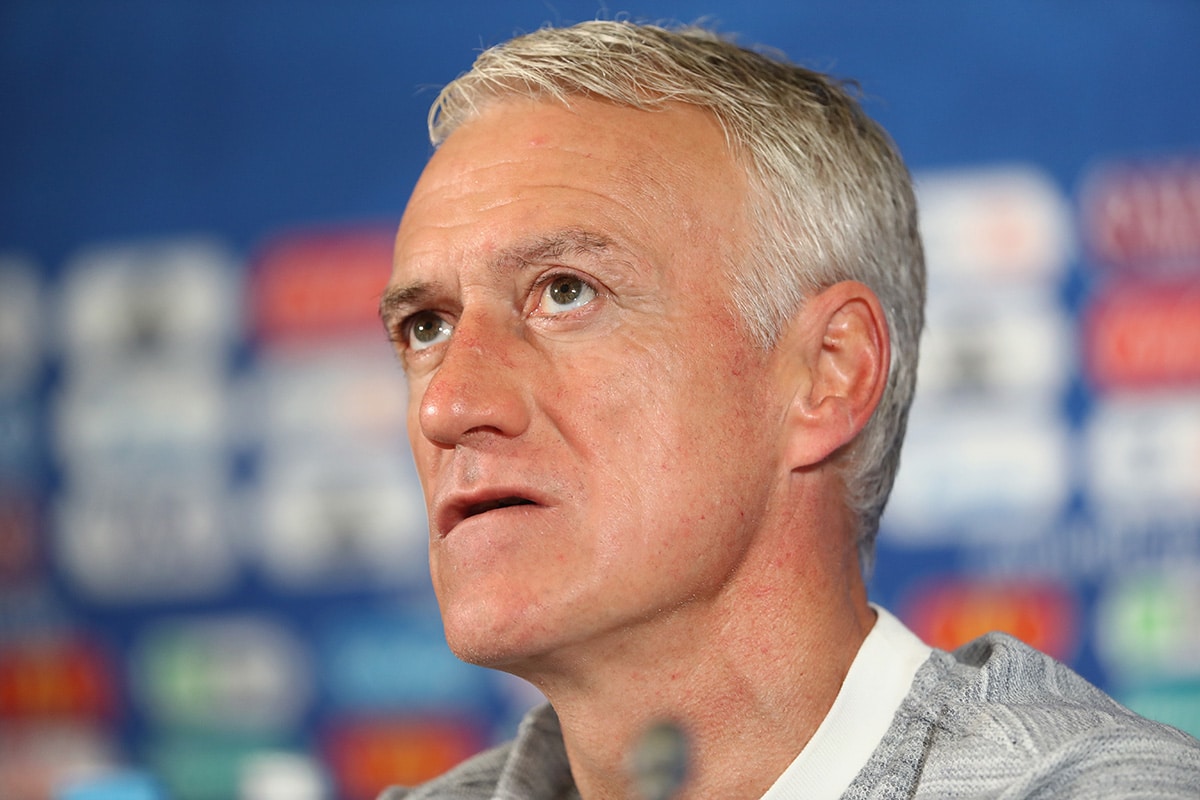 As a player the 49-year-old was equally praised and criticised for his simple and unfussy style in the centre of midfield. Neither a true creator or destroyer, Deschamps did the basics exceptionally well, was a prominent dressing room voice but was rarely noticeable to the naked eye.

That has continued into his management style. A naturally conservative coach, while he has the individuals to play a more expansive and energetic, free-flowing game, his natural inclination to err on the side of caution means Antoine Griezmann, Ousmane Dembélé, Kylian Mbappé, Paul Pogba, Nabil Fekir etc have to follow, rather than have their talent driving France’s play.

Against Australia he made everyone stand up and take notice with a front three of Griezmann, Mbappé and Dembélé but Les Bleus produced just 12 shots against the Socceroos, with that trio combining for only six of them.

Mbappé had 42 touches over the 90 minutes, while Griezmann had 32 and Dembélé 29 inside the 69 minutes they were on the field – 15 collectively inside the penalty area. By contrast full-backs Benjamin Pavard and Lucas Hernández were on the ball 166 times and Deschamps’ midfielders averaged 73.

If you’re going to be bold and select three quick, bright, young attacking players the least you could do is give them the ball.

After that experiment failed, in part due to Deschamps’ inert security, he then reverted against Peru to the familiar presence of Olivier Giroud as target man. Certainly, France looked marginally more fluid but it highlighted their coach’s familiar retreat to his comfort zone when his squad eternally screams adventure.

Having secured two wins to progress to the last 16, albeit with a point needed to top the group, Denmark were therefore a chance to really take the handbrake off. In came Thomas Lemar and Dembélé but then Les Bleus produced their blandest performance of the tournament.

In a rigid 4-4-2, France mustered just 11 shots with three on target, a painful watch as Russia 2018 witnessed its first goalless draw of the competition. Fittingly, it was Deschamps who delivered it.

France rank 14th among all teams at the World Cups for scoring attempts per game (16.61) – below Saudi Arabia, Sweden and Nigeria – and 18th for expected goals (0.98) – lower than Iceland, Morocco and Poland.

With the players he has at his disposal and in a relatively easy group that is a damning indictment of Deschamps’ coaching.

Having completely failed to find a balance in attack and utilise the playmaking abilities of Fekir or dribbling of Mbappé and Dembélé, France face Argentina with uncertainty over their all-star frontline. Uncertainty that will almost certainly means Deschamps sticks to what he knows.

There is nothing wrong with that, and few teams win tournaments without building around an excellent defensive structure, but it’s so against what he has at his disposal and how modern football is trending.

Attacking football is increasingly the norm. A vibrant, pressing, transitional style of play that requires quick and energetic footballers. France has them in abundance but Deschamps preaches patient build-up and traditional build-up.

A continuing issue also lies in the heart of his midfield with the mystery wrapped in an enigma of a puzzle that is Paul Pogba. The 25-year-old hasn’t had a bad tournament but he also hasn’t had a good tournament, either. He’s just kind of existed.

Pogba has the protection of N'Golo Kanté who is as understated and efficient as always, without being truly challenged, while the extra legs of Blaise Matuidi and Steven N’Zonzi will be present alongside him for Argentina, but still the Manchester United man drifts through games with muted impact. 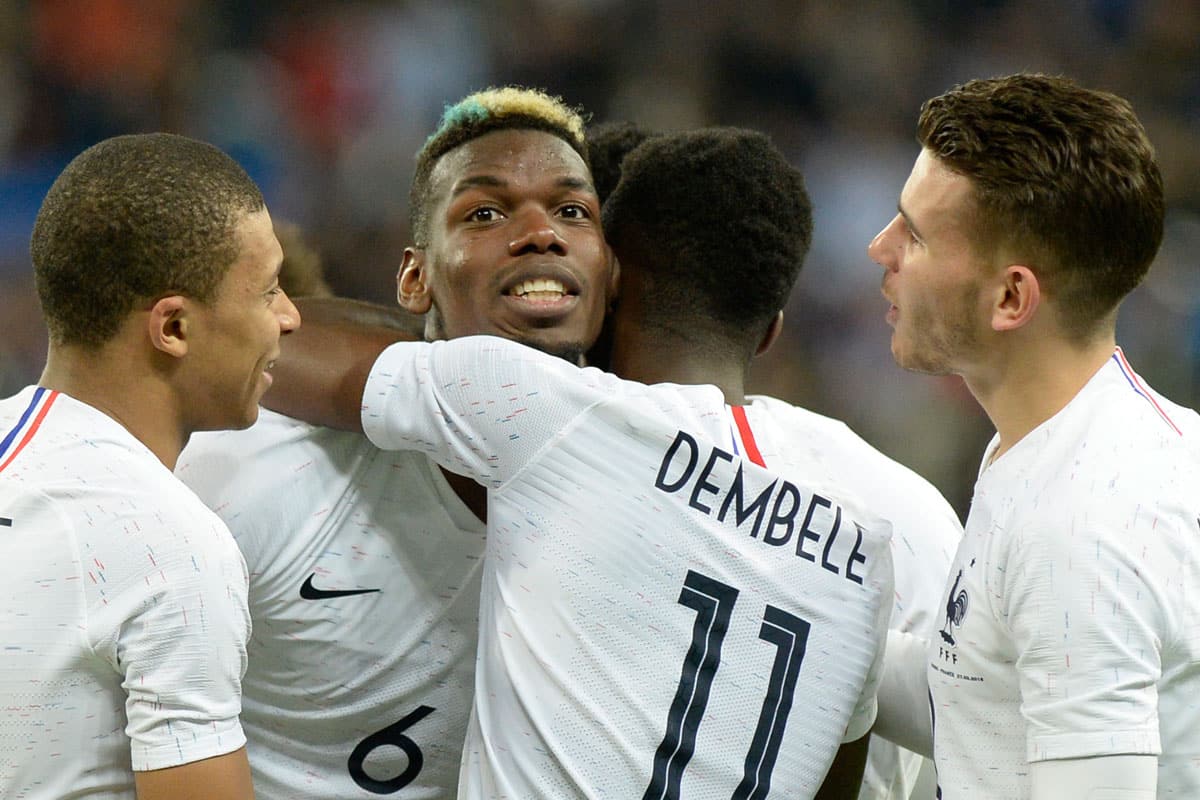 Maybe it’s time the finger points at Pogba and maybe it’s time to start considering whether he is detrimental to the overall play. Deschamps daren’t drop him but perhaps a solid, if incredibly uncreative, midfield trio of Kanté, Matuidi and N’Zonzi is key to opening up the final third.

In 179 minutes, Pogba has managed two shots (both from outside the penalty area), two successful dribbles and three key passes. Not anonymous but still anaemic. Where France need his explosiveness, instead it’s a gentle and reserved pop.

What has been impressive is their backline, at least in a defensive capacity. No team has a lower xG conceded number than France’s 0.18 and the trio of sides they’ve faced so far averaged just 7.0 scoring attempts per match.

Samuel Umtiti and Raphaël Varane have been assured and a rotating cast of full-backs comfortable if not a little ineffective in attack.

However, where has the challenge been? Peru, Australia and Denmark are competent, workmanlike outfits whose better players, Christian Eriksen aside, tend to be of a more defensive leaning.

Argentina may be a mess but they have Messi, and Ángel Di María, Gonzalo Higuaín, Éver Banega and Paulo Dybala. They can exploit an untested and vastly inexperienced back-four from different areas all over the field, knowing that the threat to their ramshackle defence won’t be as consistent.

This may have been Deschamps’ plan all along. To negotiate the group, tinker with a few formations and playing personnel and then hit on a winning formula. After all, it worked that way in qualifying.

But the coach is nothing if not predictable and unless he has something up his sleeve, this talented group of players are sleepwalking their way into a disappointing second-round exit to a team that, for better and worse, represent everything Deschamps isn’t.