France and Belgium – two sides so similar, yet so different. Both team’s strength is in their counter-attacking prowess, but in their managers they have two extremes.

There was hope for this semi-final. Hope that it would be exciting, that it might even live up to the 7-1 of four years ago, between Brazil and Germany. End-to-end stuff, basketball-esque.

For periods of time, that’s what it was. But those periods were brief.

Neither side looked keen on keeping the game in a permanent state of transitions. Normally, games fall into patterns of possession, but here these patterns took on a very different feel.

France took this to an extreme level, their forwards regularly dropping passively back to within forty yards of their own goal. 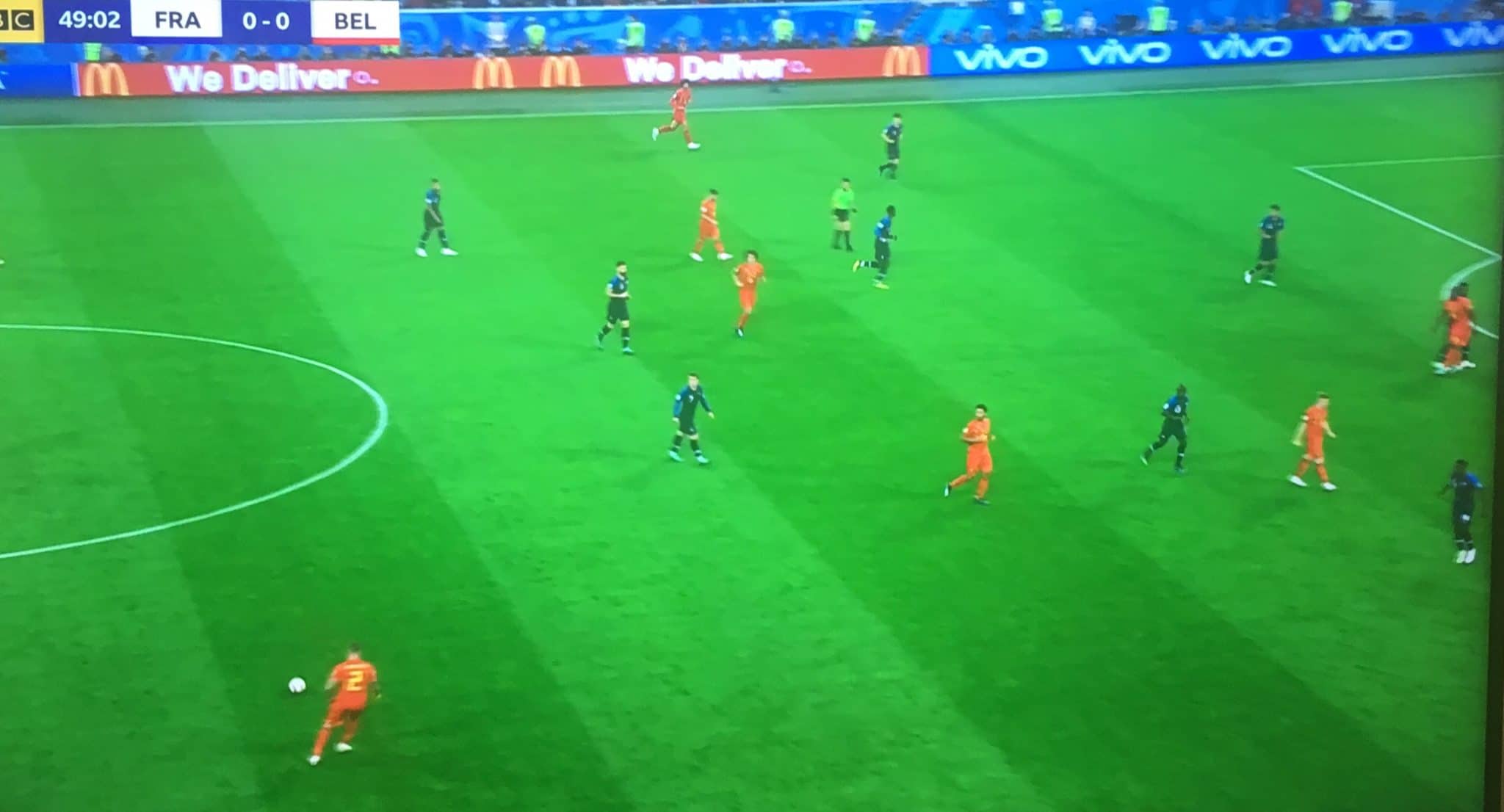 It made for fairly interesting viewing, a pace of play that matches tend not to have. A stark change from four or five years ago, when the midfield was prime real estate – now you wouldn’t catch either side dead living there, just wanting to travel through it on their commute to work.

There was an extended period in the first half, for the first 20-25 minutes or so, where Belgium dominated possession of the ball. It might have looked, to some, like they were the team in the driving seat, but it was all a French ploy that they are very used to exploiting.

A history lesson and a change

Against Germany, in the semi-final of Euro 2016, they had a gameplan that, while not exactly the same, was certainly part of the same family. In that match, Germany completed 566 passes to France’s 234, the French defended deep but came away 2-0 winners.

The interesting stand-off, both teams trying to manufacture a counter-attack through their defending, had to change after France’s goal, a header from Samuel Umtiti in the 51st minute.

Now Belgium needed to push more, they couldn’t afford to let France keep possession of the ball. They began to counterpress, and with it came the yellow cards – two within eight minutes in one period. They weren’t looking for a counter-attack anymore, as such, more just any opportunity when France might be a little out of position. Or any opportunity at all. 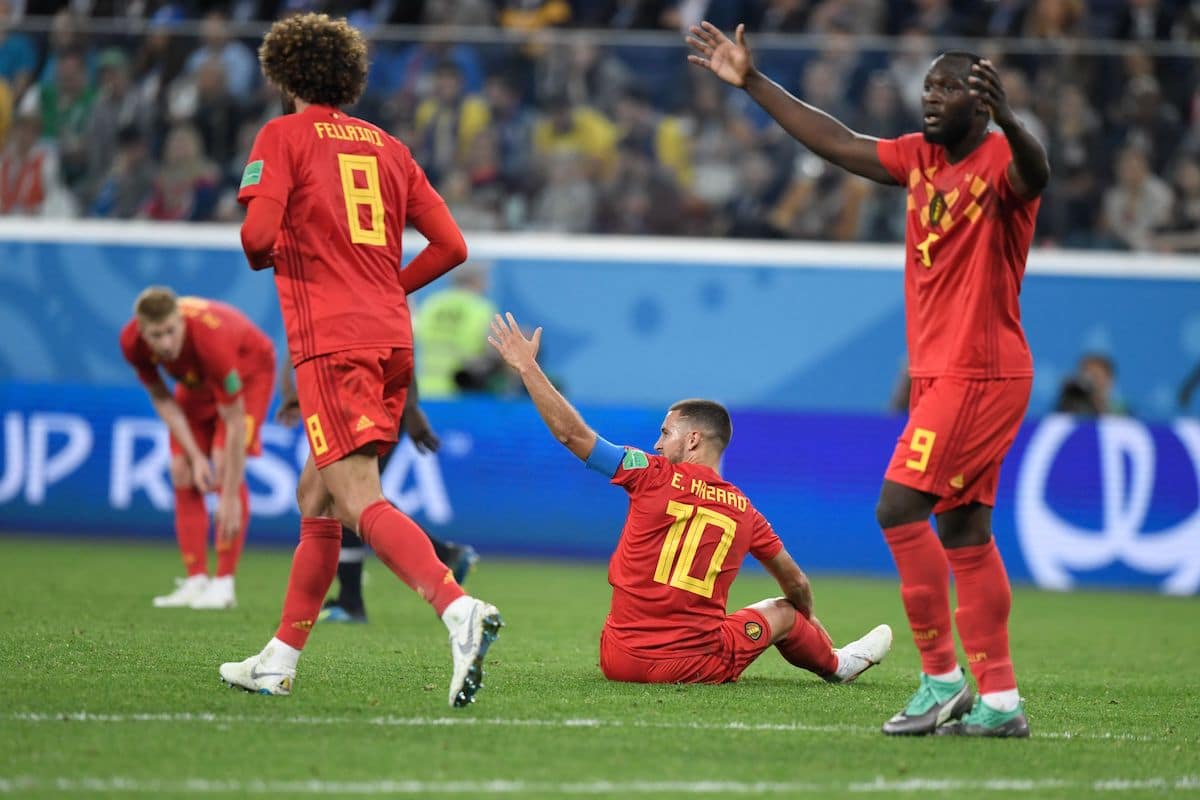 France were equal to the counterpress, though, playing out of it nicely on a regular basis.

Belgium struggled, and the game now suited France. Les Bleus didn’t have to manufacture chances to counter anymore, they appeared naturally. Mor importantly, they didn’t have to commit as many men forward, tiring them out, or even really try to score.

Putting two Belgian names in the book in the 63rd and 71st minute, yellows for tactical fouls trying to stop a counter in its tracks early, were as good as getting a shot on goal. 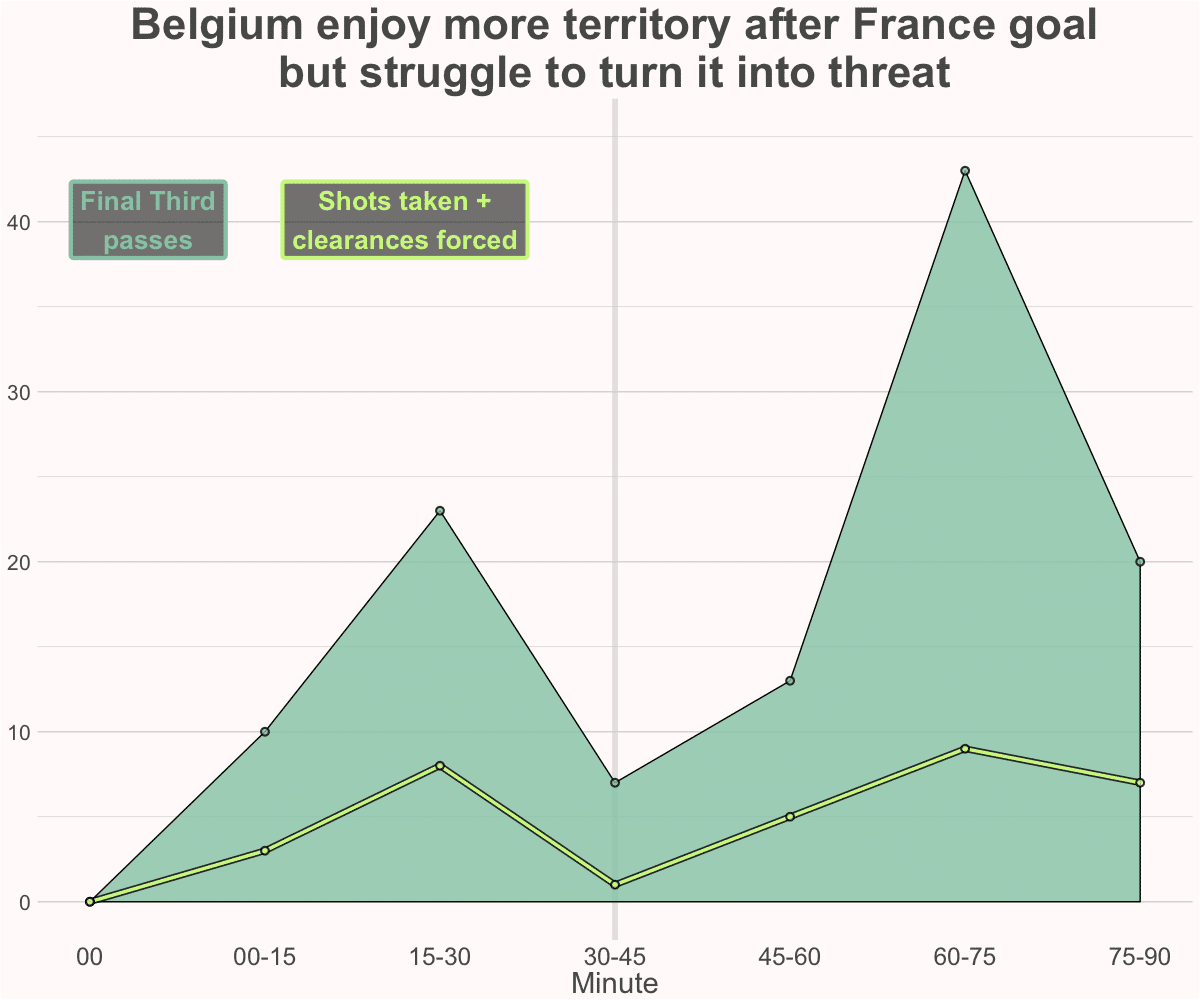 Belgium’s shame will be that they barely moved the needle in attack after the goal. Before it, they took four shots and forced 12 clearances; afterwards, chasing the game, five shots taken and 12 clearances forced.

It took them a few minutes to get going, even to begin to ramp up some territorial dominance, but even when they did so they struggled to convert it into meaningful threat.

Their most threatening 15-minute chunk, from 60-75 minutes, produced just as many shots and clearances forced as their best part of the first-half, but with far more possession of the ball high up the pitch.

The clearances Belgium had to make are a telling indicator of just how much France dialled it back after they scored.

Roberto Martínez’s men had to make 11 when the scores were level, virtually identical to the number France made, but from then until full-time the French forced them to make just four.

Even faced with this self-limiting attack, Belgium still couldn’t force the issue. Such is the danger of a team built on counter-attacking, finding themselves in a position where they were camped out in the opponents half.

Deschamps, though routinely called boring for the way that he sets up this France side, considering the wealth of threats they have, is a canny manager.

Few would have set this side to defend so deeply, and that Belgium began to do it was more a case of them following Deschamps’ lead than anything else.

This wasn’t Germany 7 Brazil 1. But it was, in it’s weird way, just as interesting.