Derry City are the strong favourites to secure all 3pts at home to Fin Harps on the 27th of May. The visitors sit second from bottom of the Premier Division table and even a win on Friday won't take them any higher in the table but a defeat could see them slip into last place.

We're expecting a low-scoring match on Friday with a good chance of Derry securing all 3pts and a clean sheet. Under 2.5 goals have been produced in three of Derry's last five fixtures while four of Finn Harps' last six outings in the league have also witnessed fewer than three goals scored, so you can see why we're expecting under 2.5 goals to be scored.

We're not backing both teams to score in this game as we feel that Derry have a great chance of keeping a clean sheet against their struggling guests. Both teams have scored in just three of the host's and two of the visitor's last six outings in the league, adding further weight to our prediction. Finn Harps have only managed to keep one clean sheet in their last six attempts and have failed to score in three of those matches.

Derry hope to close the gap on Shamrock with a win

Derry were away at Sligo Rovers in midweek where a goal from Buckly put the home side in front after 20-minutes. Derry got back onto level terms just before the break via McGonigle and the game appeared to be heading for a draw until deep into stoppage-time when Keogh won the game for Sligo. McGonigle moved onto 10-goals for the season with that goal against Sligo and he will be one to watch on Friday.

Finn Harps played host to Dundalk on Monday night in which the first half proved to be tight and tense, ending goalless. An early goal in the second half from Kelly put Dundalk in front and the visitors held firm to secure a 1-0 victory. Tourish top scores for the visitors this season with 3-goals but Finn Harps need their strikers to start scoring more if they are going to avoid relegation this season.

Derry City: Michael Duffy and Ciaron Harkin are expected to be out until June.

Finn Harps: Bastien Hery returns from suspension but David Webster is expected to miss out through injury. 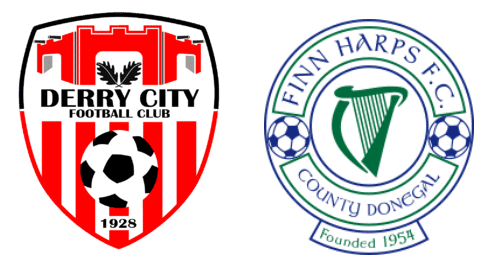