Derby host Reading on Wednesday in what will be their first home match since their points deduction for entering administration was confirmed. Can the Rams give their fans something to cheer about? Find out with our Derby vs Reading match preview with free tips, predictions and odds mentioned along the way.

Derby vs Reading: Our tips

More misery for Rooney and co

The mood around Pride Park on Wednesday is likely to be a good one with the fans and team united amongst an ugly background off the pitch. You can bank on Wayne Rooney's men being fired up and playing their hearts out but whether they have the quality to see off Reading is another question. At the end of the day, whatever way you dress it up, Derby have  won just one of their past five matches compared to Reading who have won three on the spin. We fancy them to get another victory here.

A tight match but little consolation for Derby

So, we've backed Reading to win with our first prediction but now we need to stress that we don't think there will be loads in the match. Derby have only won one of five games but they've drawn three and lost out to Sheffield United in harsh circumstances with a penalty eventually coming from a corner that should never have been in the last minute. It shows Derby are far from pushovers so whilst we expect them to lose, they'll go down swinging.

Rams to fail to score

Our final prediction is one that says Derby will end up blanking in front of goal. They lack a goal threat with Colin Kazim-Richards not in the team and have just two goals from their last four games; both came in the same match but one was a wonder strike out of nothing and the other was a keeper mistake. They just don't look like cutting teams open and it wouldn't be a huge shock to see them fail to net again here.

Check out the top odds for Derby vs Reading

Poor old Derby. It's a tough life. With administration confirmed, a 12 point deduction off the pitch the last thing needed was a dubious refereeing decision. That's what happened at Sheffield United but at least there is a blatant spirit amongst the players. If they can keep in touch with the pack ahead of them in the next few weeks the as players return from injury they will give themselves half a chance. Reading are the great entertainers of the Championship this season with 17 goals scored already. That's quite remarkable considering a talent like Lucas Joao remains out injured. Thankfully, they have John Swift; he's scored or assisted in each of his last four. 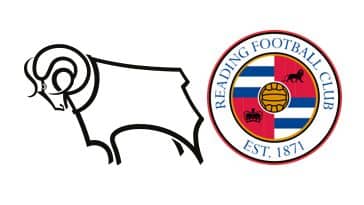