The lunchtime kick off in the Championship this weekend brings us the East Midlands Derby. Who though will win the match? Find out with our Derby vs Nottingham Forest match preview with free tips, predictions and odds mentioned along the way.

Our first tip backs Derby to win the match, which will continue Nottingham Forest's poor run of form. They're yet to win a league game from their opening four matches and, after Tuesday's thrashing against Wolves, they're also out of the League Cup. Derby aren't exactly smashing things this year with plenty of challengers facing Wayne Rooney's men but they do have five points on the board with a win and two draws to their name. The match will be tight but rivalry and fans being back in the stadiums after a long absence means hike advantage will be key.

One of the teams will fail to score

With the match being a derby game we can expect to see fiery tempers, big tackles and plenty of hard running. It's just as well too because quality might be lacking somewhat. Derby have seen at least one team blank in two of their last three matches whilst both of Nottingham Forest's previous two matches have ended with someone failing to find the net. With neither team particularly in hot form in the attacking sense and with points in high demand, it wouldn't be a surprise if both sides opt for a pragmatic approach. If that happens, both teams scoring is very unlikely.

The last of our three free tips is for the game to be a low scoring one; specifically, we think it will see a maximum of two goals. Three of Derby's last five home games have ended up under the all important 3.5 cut off with the game average being 2.4 goals. Nottingham Forest meanwhile have seen theee of their last five away games miss the 2.5 mark; their game average is also 2.4. To help cap the prediction off, look at their head to head form; the last four meetings have all been under 2.5.

The best odds for Derby vs Nottingham Forest

Derby were the team everyone expected to be struggling this season but they've shown a lot of fight, good organisation and had glimpses of quality to muster together some points albeit the season will still be W long one. Nottingham Forest meanwhile find themselves bottom of the league with boss Chris Houghton under pressure even at this early stage. Derby have a few injuries amongst their squad but in the likes of Ravel Morrison and Tom Lawrence they have players capable of winning a match in the blink of an eye. 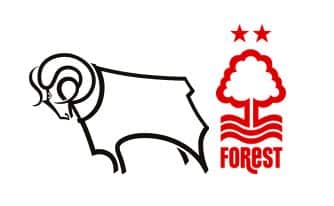