Derby vs Millwall: Check out our betting tips

The Derby survival dream remains very much alive after they won at the weekend again. Can they produce another performance here? Find out with our Reading vs Birmingham match preview with free tips, predictions and odds mentioned along the way.

The Rams to beat the Lions

Derby are giving it a real go when it comes to the battle to survive and we think they're goi to take another three points here. Their home form has been key to their resurgence from the foot of the table and with five wins and a draw from their last six at Pride Park you can see it's a tough place to visit. Millwall then really won't be looking forward to this away day; their form on the road is really poor with three losses on the spin and just one win in their last eight away games. The Lions do have a good record at Pride Park but, then again, they failed to beat them in the reverse fixture. This could be another good day for Derby.

Next up we take on the bet that says at least one of these teams will blank. In three of Derby's last five games at Pride Park we've seen a score to nil whilst Millwall's away form is similar; three of their last four have seen someone fail to score. Given that each of the last nine meetings between these two with Derby as the home side have ended with one side blanking, it's a good omen for it happening again.

Here are the key stats & form guide for Derby vs Millwall

Sure, Millwall are involved in this game too but in reality it's all about Derby and whether or not they can further their survival ambitions with a win. For Millwall, mid table awaits regardless.

Derby had a huge win last time out as they netted late to win their relegation face off with Peterborough. It did come at a cost though with Tom Lawrence sent off. Can the Rams find another win here? It would be huge if they could.

Millwall have won their last couple of games but they have been at home. Their away form is poor and they're walking into an environment that is bouncing right now. If anyone can handle hostile though, it should be the Lions. Will they ruin the party mood of Pride Park? 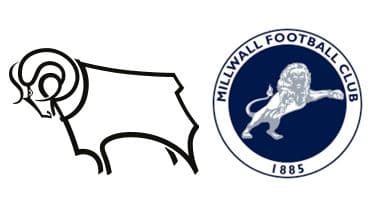