“I have been improving a lot,” Memphis Depay said last month, and few disagreed. “Not only on the pitch but as a person. I’ve become more mature.”

That is clear for all to see. The Memphis Depay on show at Lyon – confident, driven, intelligent – is very different to the Memphis Depay who proved so disappointing at Manchester United.

There is far more to the Dutchman’s game now. Where once he was hesitant, seemingly reluctant to drive at defenders and make the most of his enviable attributes, now he is focused, with a newfound confidence.

Should Depay eventually return to Manchester United – the club included a buy-back clause in his contract when he was sold to Lyon – he will have many people to thank.

But the man who will, no doubt, take much of the credit for Depay’s reinvention is his international manager: Ronald Koeman.

For so long Depay had felt shackled by his defensive duties. He admitted that “it was impossible for me to play this way. It wasn’t really where I was at my best.” At Manchester United, he was utilised as a winger, and he continued in that role when he first arrived at Lyon.

After Koeman moved Depay into a centre forward position, though, there was a noticeable transformation. He netted for the Netherlands in a 3-0 friendly win over Portugal and Lyon coach Bruno Genesio chose to follow Koeman’s lead.

The results were instant: Depay scored or assisted 12 goals in the five league games that followed. He ended the campaign with 19 Ligue 1 strikes to his name, a total bettered only by Edinson Cavani and Florian Thauvin.

A more central role allowed Depay to thrive: there was more space, more room for him to drive into, and his impressive finishing ability came to the fore too. “I like playing in this position,” he admitted.

Clearly, the positional switch, and the renewed confidence that came with it, made Depay far more influential, both as a creator and a goal scorer.

It allowed him, too, to be less speculative with his attempts, less erratic, as he often could be when cutting inside from wide areas. His goals to xG ratio stood at 1.77 last season, an upgrade from 0.86 in the previous campaign.

Depay has not been so central for Lyon so far this season, although a relatively slow start will not be overly concerning. Performances have, largely, been strong: he impressed in a 2-1 Champions League win over Manchester City last month and remains a key figure.

It is on the international stage, though, that Depay has truly caught the eye. Against Germany on Saturday, in a 3-0 Netherlands victory, he was superb. His delivery from a corner led to the first goal, he scored the second – a cool finish after a quick counter attack – and an inventive dummy played a significant part in the third. He struck the bar, too.

Depay was the focal point of the Dutch attack and Germany’s back four were unable to contain him. 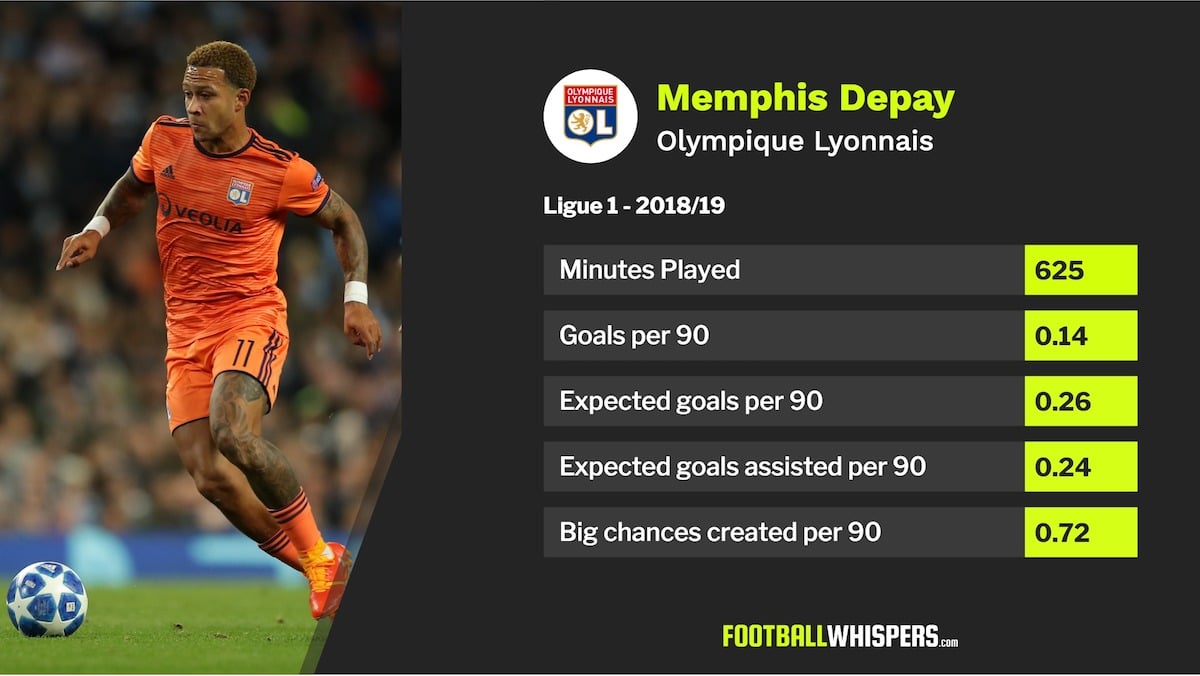 Inevitably, a performance like this on such a big stage led to widespread plaudits and talk of an imminent return to Manchester United. Perhaps they will be tempted. Goals have not exactly been flying in at Old Trafford and Depay, at his best, offers something different, something they did not really see during his brief spell at the club.

“Everybody knows the story of me and Manchester United was not successful,” Depay has said. “I'm just happy that I'm the player I am today. I can look back and say I didn't want it to go like that – nobody did – but things happened. I became a much better player. I can feel it in games and everyone can see it.”

The story, though, might not be over for Depay and the Red Devils. There was a reason they included the buy-back option when he left. His natural talent has always been evident, but the club might have considered it better for all parties if he developed elsewhere.

That is what he has done. When Depay arrived at Old Trafford in 2015 he was an inexperienced, naïve 21-year-old, fresh off the back of an exciting season with PSV but still with much to learn. Now, at 24, he is hardened, confident and well-established.

There should be more to come, too. On the evidence of the Netherlands’ convincing defeat of Germany, Depay is hungry, and determined to make a point. He does not want to be remembered solely for an awkward and unfortunately timed period at Manchester United.

Expect more eye-catching performances from Depay in the near future, more goals and more assists. He has, it seems, found his natural position, and when the confidence is flowing he is close to unstoppable.