Arsenal are in need of a new midfielder. With Aaron Ramsey off to Juventus in the summer, the Gunners must find an adequate replacement, someone capable of filling the void left by the Welshman.

In Dennis Praet, they might have done just that. The 24-year-old, who has spent the last three seasons in Serie A with Sampdoria, was a target last summer but a move failed to materialise.

Another year has passed and the Belgian international has continued to impress. He is dogged, intelligent and combative, a player as tenacious as he is skilful. And he has proven himself capable of fitting into a high intensity, pressing-based midfield, such as that Unai Emery’s deploys at Arsenal.

Praet was a clear talent from a young age. He joined Genk’s famous youth academy – where players such as Kevin De Bruyne, Thibaut Courtois and Yannick Carrasco began their careers – at eight and quickly established himself as one of the brightest prospects at the club.

Praet's potential soon attracted interest from Europe’s elite – notably Arsenal, Barcelona and Ajax sent scouts to watch him as a teenager. In 2010, though, he joined Anderlecht, turning down more lucrative offers. It proved a good fit.

Praet soon became a regular and in 2014, during a season in which he hit nine goals in all competitions for Anderlecht, Praet made his international debut in a friendly against Iceland.

A midfielder capable of driving forward from deep in midfield, of pushing his team on in transition, Praet’s form did not go unnoticed. He joined Sampdoria in 2016 for €10 million, slotting into a midfield three alongside Lucas Torreira – now at Arsenal – and the hard-tackling Édgar Barreto.

He's been a mainstay ever since, a dependable performer in Marco Giampaolo’s well-organised and disciplined Sampdoria team. The Blucerchiati currently sit ninth in Serie A, on course for their highest finish since 2014-15, and Praet has played a significant part in that.

He is an accomplished dribbler, able to glide past his marker and pick out a teammate. He is quick over short distances, too, and uses his awareness off the ball to constantly press and harry opponents. 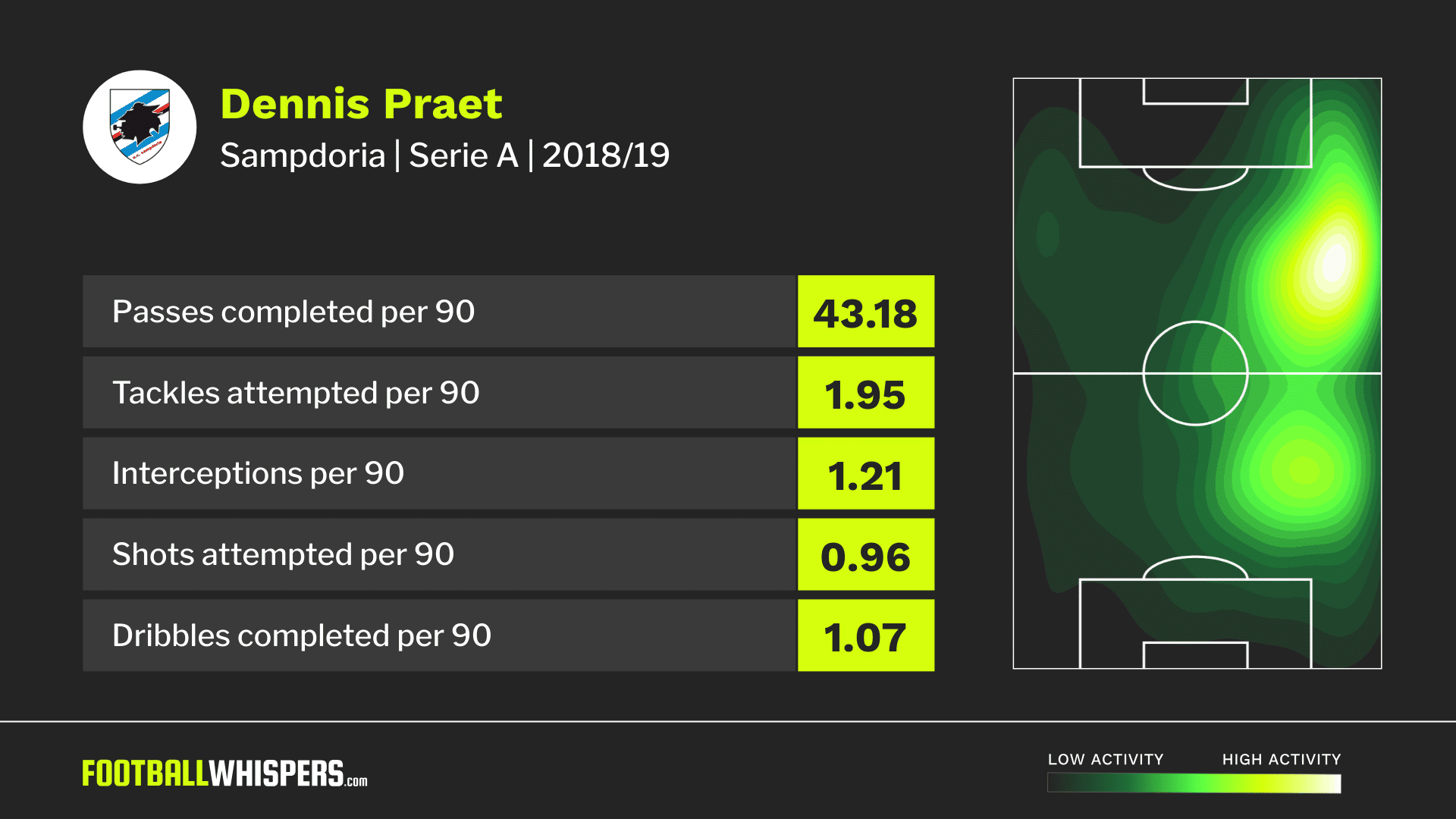 There is nothing spectacular about Praet. He is mostly functional, reliable, and possesses the tactical intelligence many players his senior simply do not have. That, though, appears to be exactly what Emery is looking for.

Arsenal, should they make a move for Praet, will hope for more of a contribution in attack. The former Anderlecht man has scored just twice and provided three assists in Serie A this season, although he tends to operate in deeper areas.

Even though he lacks the creativity and guile of someone like Ramsey, Praet remains an effective midfielder. He can operate as a ball-winner – last season he ranked fifth for tackles per 90 in Serie A with an average of 2.7 – and a playmaker – Praet completes an average of 43.17 passes per 90, at a completion rate of 85.6 per cent.

Should a move to Arsenal transpire, Praet would also be reunited with former teammate Torreira. That understanding could prove a success for the Gunners.

There is, of course, still plenty for Praet to improve on. At 24, he is still young, still more than capable of furthering his development given the right coaching. All will depend on whether Emery is searching for a midfielder with more proven quality in the final third.

Praet may yet choose to stay where he is, too. A move looked a strong possibility last summer, when interest from Everton and Newcastle was also reported. “I didn’t want to leave,” Praet admitted in an interview with Belgian paper Humo earlier in the season.

“I thought something would have changed here, I thought the manager would have given me a new role. I love this club and the president is a special person. He has a great approach with footballers and that’s a huge difference compared to Anderlecht.”

Arsenal might consider Praet, who had a reported release clause of €25million in his contract last summer, a relatively risk-free and affordable option. If he does make the switch to the Emirates, the Leuven-born midfielder could well prove to be a shrewd acquisition.