Dennis Geiger burst onto the scene as a teenager for Hoffenheim. His composed performances in the middle third and his ability on the ball resulted in comparisons to German legend Toni Kroos.

Although a little premature, it was hard to ignore the similarities between the two midfield maestros. However, the one similarity you couldn’t look beyond was how both had the ability to make everything look simple.

So much so, in fact, it was almost boring watching them pick passes as if opponents weren’t even trying.

But just as quickly as his stock rose, it dropped. Though it wasn't because of the inconsistency that plagues other teenagers, it was to do with injuries.

His debut campaign was stop-start because of various knocks and muscle problems. It was brought to a premature end in March because of a hamstring injury and then his 2018/19 season never really got started. He went on to make just four Bundesliga appearances last term.

The Hoffenheim No.8 has missed the odd game this term but looks back on track. He’s appeared in 644 minutes in the German top-flight and already has three assists to his name. A fit and healthy Geiger is a game-changer and it’s no coincidence that Alfred Schreuder’s side are one of the surprise performers this year.

Geiger's performances for Die Kraichgauer haven’t gone unnoticed either. According to Sport1, Manchester City, Everton and Bayern Munich are all keeping close tabs on the 21-year-old.

City are in the market for a midfielder to eventually succeed Ilkay Gündoğan and the belief is Geiger fits the bill. While playing time may be limited at the Etihad in the short-term, a little patience could see him tasked with pulling the strings for the Premier League champions over the next decade.

Everton, meanwhile, haven’t had much luck with injuries this season. All three summer signings have suffered varying injuries: André Gomes and Jean-Philippe Gbamin both long-term absentees while Fabian Delph has picked up the odd knock here and there. The Toffees could do with a dictator in the middle third and would give the German youngster a platform to really strut his stuff.

Bayern added midfield reinforcements this summer with the signing of Mickaël Cuisance from Borussia Mönchengladbach. Undeterred by this, the Bavarian’s are also looking to add Geiger to their ranks to ensure there’s a clear line of succession with Javi Martínez and Thiago not getting any younger.

Joshua Kimmich has filled in at centre midfield at times but he’s one of the best right-backs in the world. Keeping him there should be a priority. 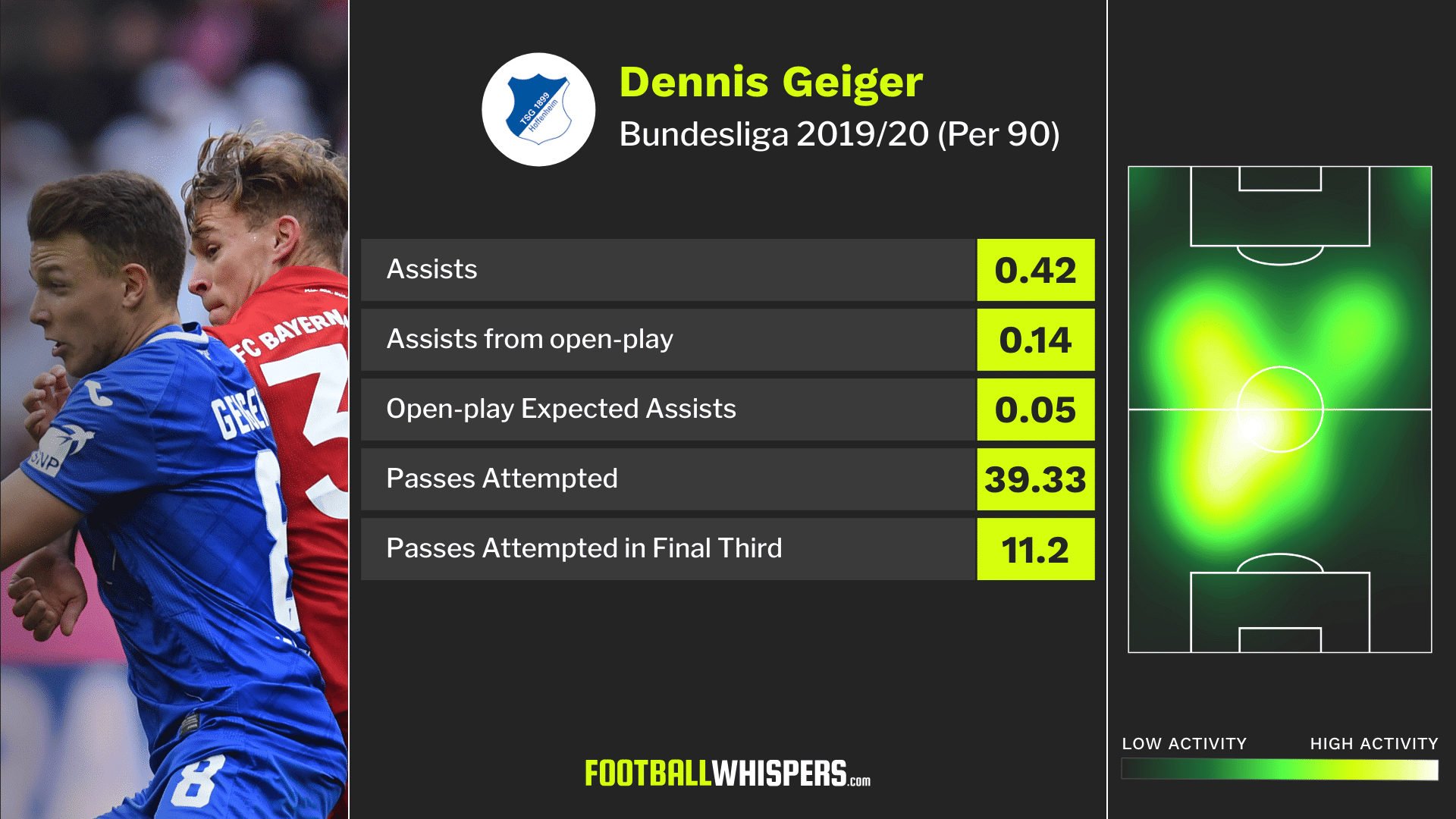 Geiger is quite clearly a talent. A creative hub for both club and country, this season in the Bundesliga he's averaged 0.42 assists per 90. He's playing, on average, close to 40 passes and 11 of those are in the final third. The 21-year-old isn't one for sterile possession, that is for sure.

However, there are question marks hanging over whether or not he's creative enough in open play. His assists per 90 average drops to 0.14 per 90 when removing set pieces from the conversation while his open-play expected assists average is just 0.05.

Now, there is space in the game for dead-ball specialists – what Geiger is – but the general consensus is he needs to offer some sort of threat in open play, too.

This is something of a dated view, though.

There are individuals out there who primarily link play in the middle third. What they do can't really be quantified with normal stats and this is the case with the Hoffenheim No.8. He keeps possession ticking over. His role for Hoffenheim doesn't task him to going on slaloming runs. Instead, Geiger moves the ball left to right and back again. It's monotonous but he carries the instruction out well.

Given his ability on the ball, it's likely he could become a little more creative and potent in the final third if required and his current output shouldn't be a concern.

Geiger is unlikely to have a highlight reel worthy of YouTube, but, simply put, with him in the starting XI any team will have much more control over matches. With how frantic and frenetic the game is these days, that sort of player is a welcomed addition to most midfields.

Hoffenheim are a selling club and Geiger isn't likely to break the bank. It's a no-brainer for the interested clubs. They could land themselves Kroos' heir for a bargain fee.