Moments of footballing magic are never forgotten and always remembered by people who were there and everyone watching knows where they were. 15 years ago, Dennis Bergkamp pulled off a piece of individual genius at St James’ Park and not only added to his own legacy, but struck a vital blow in Arsenal’s 2002 title chase.

The Gunners went into the game just one point behind Bobby Robson’s team and three points short of league leaders Manchester United.

Although the Dutchman has scored some wonderful goals, we all remember the efforts against Leicester City at Filbert Street and his superb control and strike against Argentina at France ’98, but it was the wider connotations that made his finish against Newcastle his best ever goal.

“It was very important because Newcastle were doing well at that time,” Bergkamp said at the end of the season. “Nobody really expected us to take the points at that stage. To score the first goal, to me that was one of the most important goals.”

Not just vital, it was a masterclass in doing the impossible.

The ball is played in to Bergkamp’s feet on the edge of the box, with his left, he lifts the ball over to his right, while he turns and spins in the opposite direction, going around the helpless Nikos Dabizas.

“A lot of people have spoken to me about that game since,” the Greek defender told French magazine So Foot. “They think I’m embarrassed, annoyed… Not at all! I’m going to tell you: I’m very proud.”

“I was part of a work of art because that move is one, a real work of art. It was done by a genius.”

Once he beats his man, the Dutchman gets the ball onto his right-foot and finishes low in the far corner.

“I thought the ball was a little too much behind me so I had to turn to control it,” Bergkamp says of Pires’ pass. “The quickest way to turn the ball was going that way. It looked a bit special or strange or nice but for me it was the quickest way to the goal. The finish: it was just trying to get it past the goalkeeper in such a way he cannot reach it.”

Far from done for the night, the former Inter Milan man would set up Sol Campbell for the second and Arsenal took a vital three points away from the North East.

Arsenal Went on to Win the Double 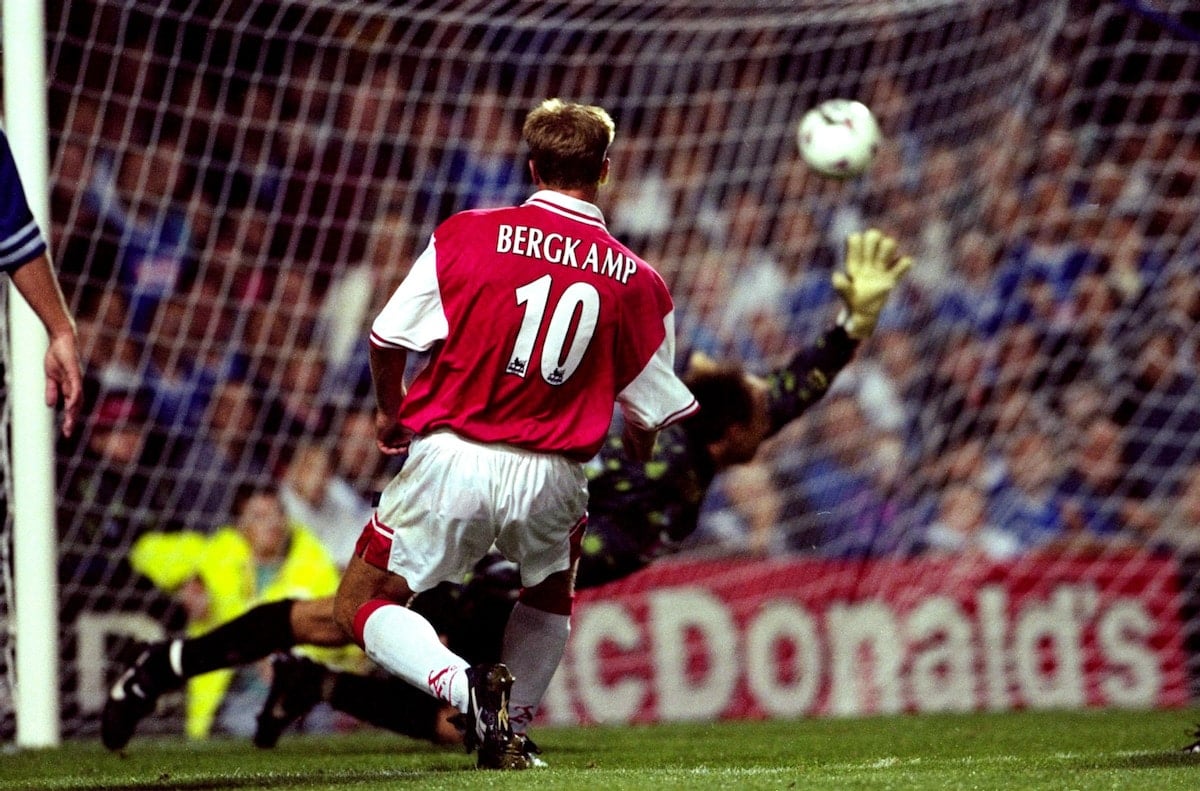 The win took Arsène Wenger’s team above the Magpies and Liverpool and they had United in their sights. Robson’s men couldn’t recover from that home defeat, they would finish fourth and Arsenal would use it as inspiration, not only did they finish 10 points ahead of Sir Alex Ferguson’s side, seven clear of Liverpool, but they would go on to claim the league and cup double, beating Newcastle on a replay before Ray Parlour and Freddie Ljungberg scored twice in the second half to beat Chelsea 2-0 at the Millennium Stadium in Cardiff.

Although Bergkamp arrived before Wenger took charge, it was the combination of the pragmatic Frenchman and the dazzling Dutch magician that took Arsenal to another level. Bergkamp had endured two tough years in Serie A before joining for £7.5million, but it was clear he was something special and his influence helped turn the London club from the boring, boring Arsenal, to a free-flowing attacking unit.

Bergkamp was Wenger’s vision of someone he could build his game-plan around, but in his new boss, the Dutch international had found a kindred spirit, a manager that would allow him the freedom to express himself. Something that was rarely found in that period of Italian football.

“Dennis Bergkamp was a really big name, we couldn’t wait to see him,” Ray Parlour said looking back at his arrival. 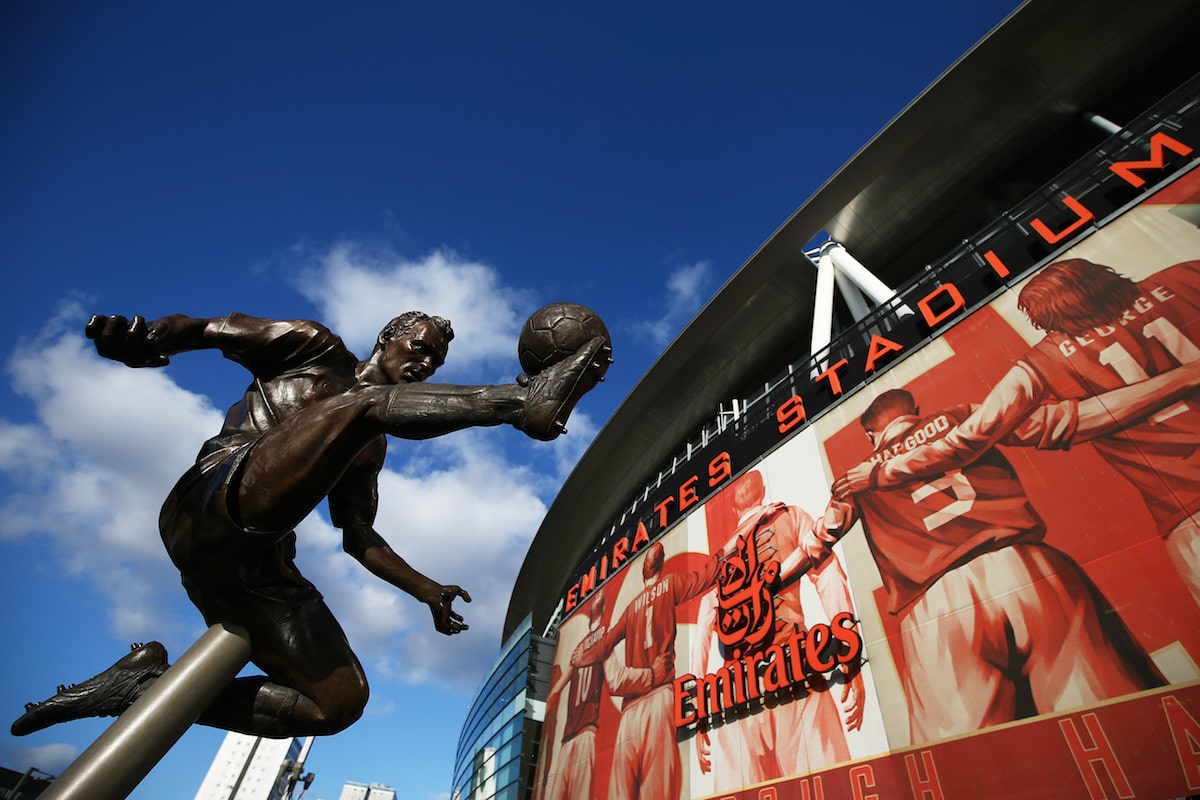 It took a few games for the new arrival to make his impact, going six games without a goal, but a double at home to Southampton sparked him into life. He would finish his first campaign with 11 league goals, 12 in his second term.

Many look towards the arrivals of Patrick Vieira, Robert Pires and Thierry Henry as the pieces of Wenger’s puzzle that built Arsenal’s success, but you should look at Bergkamp’s overall impact on the team and the effect he had on the players around him.

Ian Wright was close to the exit door after his relationship with Bruce Rioch had reached breaking point, he would stay and his partnership with the Dutchman turned the former Crystal Palace into the club’s all-time top scorer – before Henry took over – calling him the “best signing Arsenal have made and ever will make.” Wright labelled him the “messiah who is going to save us,” and you can’t argue with the results.

When someone like Henry, who played with Ronaldinho, Lionel Messi and loads of top internationals in his time, called the Dutchman the greatest he has played with, you get a taste of just how influential Bergkamp was on the young Frenchman’s career.

“It was one year before I started here, so that shows you it was 20 years ago and it was one of the historic signings of Arsenal Football Club,” Wenger told the club's official website.

“Dennis is a player who is admired by all the other players and was the first push of Arsenal into the modern, international era.

“He brought creativity to this group of very strong players and it was a good marriage.”

They didn’t always see eye-to-eye, especially near the end of Bergkamp’s time at the club, but that came down to an admitted stubbornness for the player to realise his legs were not what they used to be and a clash with Wenger’s methods, but that doesn’t mean his legacy at the club was in any way damaged.

“He came up with statistics and said to me, ‘Look Dennis, after 70 minutes you always play badly and you are not as fast'. But I get so tired of Wenger and his statistics.”

Who will be Arsenal's Next Hero?

It’s forgotten, that in 2002, when he scored that amazing goal against Newcastle, that was only his ninth goal of the season. By far one of his less productive campaigns after moving to England, but as a moment and the wider impact it had in building The Invincibles and becoming the club they are today.

Despite the current anger from the Arsenal fans and their feelings towards Wenger and his methods, this is the sort of moment that should always be remembered and how both player and manager worked together for perfect harmony.

As Arsenal travel to Anfield on Saturday to take on Liverpool with a very poor record against the other top sides, how Wenger would love one of his new charges to produce a moment of sheer brilliance on Merseyside and spark another wonderful run of form for the North London club.