What started with a sublime, yet speculative, 50-yard pass from Frank de Boer, culminated in one of the finest goals the World Cup has ever seen, and it was all thanks to the genius of one player.

There are many factors that determine what makes a goal special, or beautiful. And different people will place varying emphasis on which of these factors is most important.

It’s all about individual skill some will argue, while others place higher value on an intricate series of passes involving multiple players.

To say a match-winner in an important game carries more weight than, say, the last goal in a 6-0 dubbing is a reasonable argument. But it is also reasonable to suggest that a moment of magic should be able to stand alone, and should not be downgraded based on whether it was the first or last goal of a game.

No matter the arbitrary framework we apply to judging a goal’s quality, when considering Dennis Bergkamp’s strike against Argentina in the quarter-finals of the 1998 World Cup, only one conclusion can be reached: this was about as good a goal as you could wish to see.

Although Bergkamp insists that the perfect game is something a footballer should strive for, but is ultimately unachievable, when asked about his goal against Argentina in an interview with ITV Sport in 1999, the Arsenal legend admitted that his goal was a once-in-a-lifetime strike.

He said: “The moment itself, I think, yeah, was perfect.” As de Boer’s pass hung in the heavens, the Argentina defence began to scramble across to where they thought it would land, but Bergkamp was already a step ahead of them. With both feet off the ground, the Dutchman killed the ball dead with the most immaculate first touch imaginable.

With his second touch, he side-stepped the on-rushing Argentinian defender – who just happened to be Roberto Ayala, one of the finest centre-backs on the planet at the time.

Bergkamp’s third and final touch was a delicious stroke with the outside of his right boot, sending the ball arcing beyond a helpless Carlos Roa and nestling in the top corner. There was no time for an Argentinian reply, the Netherlands were through. Bergkamp fell to the ground in celebration, as the watching world was stunned into silent disbelief at the sorcery he had just conjured.

The goal was a masterful display of control, anticipation and execution: three facets that set Bergkamp’s abilities apart from the crowd. His touch was unparalleled; his vision was magnificent; his technique flawless. Bergkamp rose to prominence from the Ajax academy in the late-1980s, and quickly earned himself a reputation as one of the finest young talents in Holland after being given his professional debut by Johan Cruyff as a 17-year-old in 1986.

Part of a golden generation of Oranje football, in the early-'90s, Bergkamp’s goals saw him finish as the Eredivisie’s top scorer from 1991 to 1993, and helped Ajax win their first league title in five years, as well as the 1992 UEFA Cup. This period of success saw the youngster given an international debut in 1990, and named Dutch footballer of the year in 1992 and 93.

At this point, Bergkamp’s pedigree was undeniable, and a host of Europe’s biggest clubs were queueing up to sign him. Cruyff advised Bergkamp against signing for Real Madrid, and instead he joined Internazionale for £7million in 1993. 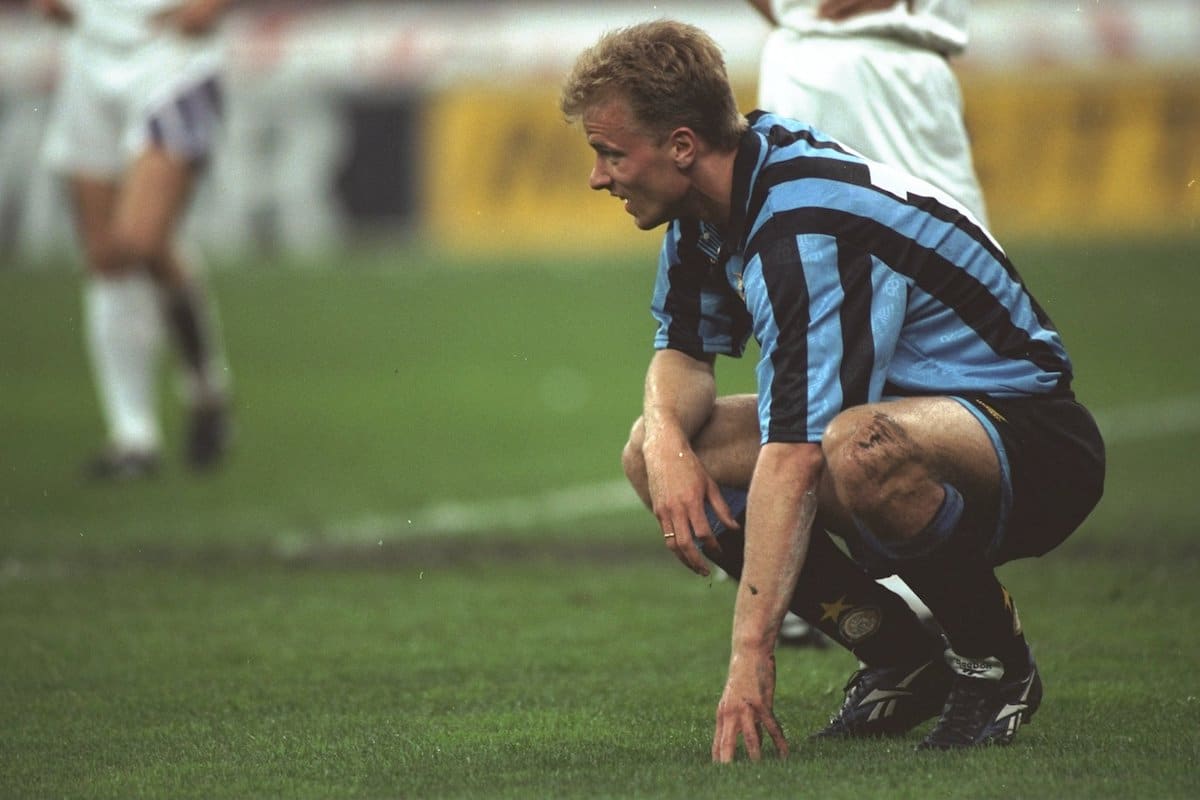 Bergkamp’s arrival in Serie A promised much, but, in truth, delivered little. The Nerazzurri were an inconsistent beast in this period; the 1993/94 season saw them win the UEFA Cup while barely avoiding relegation domestically. In his two seasons at the San Siro, Bergkamp scored just 11 goals in 52 Serie A appearances.

Happier times lay ahead, though, as a £7.5million move to Arsenal proved to be the catalyst for re-launching both Bergkamp’s career and the Gunners’ status as title contenders.

Bergkamp’s arrival in England coincided with an influx of continental players making their way to the Premier League – most of whom were big-name stars coming to the end of their careers, who had moved to England’s emerging top division for one final pay day.

While this may have been the case for the likes of Ruud Gullit, Gianluca Vialli and Fabrizio Ravenelli, it certainly was not true of Bergkamp. The Dutchman, at 26, still had his best years ahead of him, and he arrived at Highbury with a point to prove.

Nobody has ever doubted his ability, but in Italy Bergkamp’s commitment had come into question. The Dutchman is a consummate professional and would have been disappointed by these accusations. The feeling among observers of his Inter spell was that, because he went straight home after games, he was not a team player.

This could not have been further from the truth. Bergkamp was schooled in the Dutch Total Football model, where the team comes before the individual. To misinterpret his desire for privacy and preference for staying at home, away from the limelight, as a lack of commitment to the team cause was both ridiculous and incorrect. 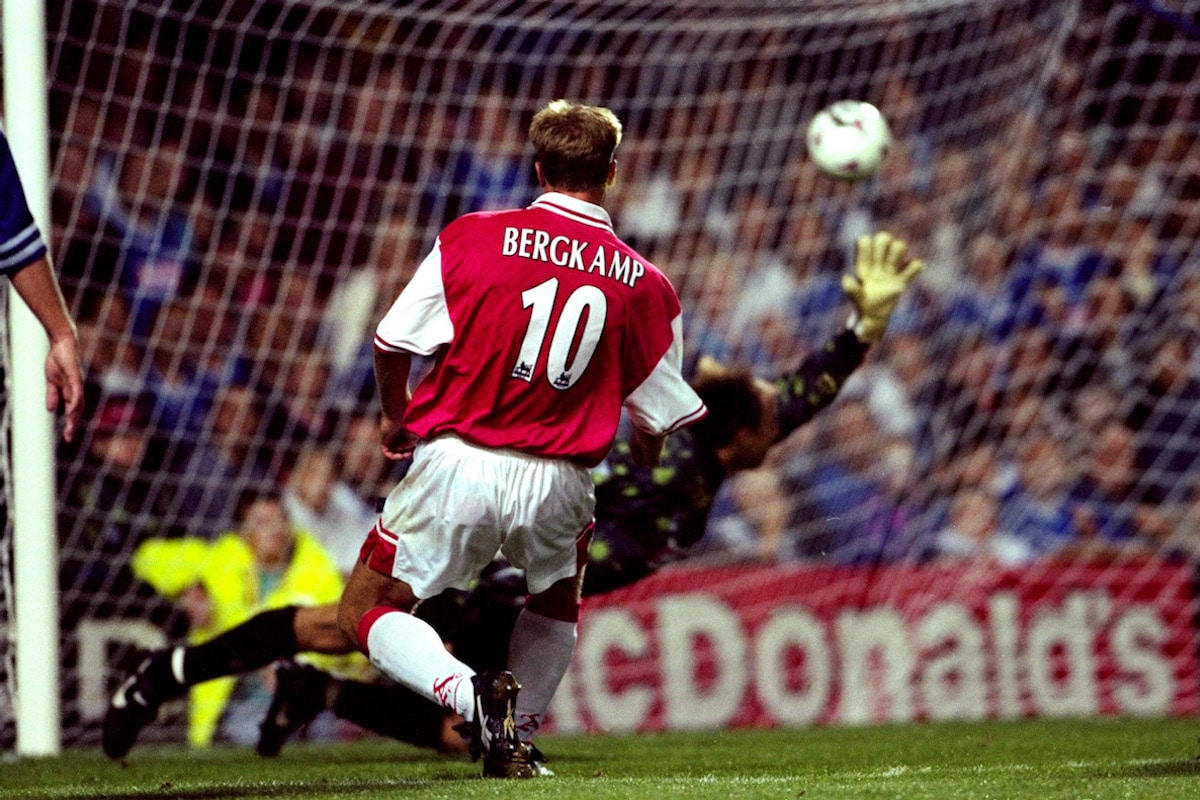 As his Arsenal career showed, Bergkamp was a shining example to every player around him. His presence raised the standards for the Gunners, both on match days and on the training field.

Ian Wright and Paul Merson, two immensely talented players in their own right, have both publicly commented on Bergkamp’s unquestionable work ethic, as well as his otherworldly technique.

When Arsène Wenger was appointed Arsenal manager in September 1996, Bergkamp’s game was raised to a whole new level. The former Monaco and Grampus Eight coach instilled a playing style which was based heavily around rapid passing, and movement off the ball.

Wenger’s approach was regarded as revolutionary at the time, with the English game still heavily focussed on hustle-bustle physicality. Bergkamp had adapted brilliantly to the physical nature of the Premier League, and allowed no defender to bully him. But with the new manager’s progressive tactics, the former Ajax man thrived.

As a deep-lying centre-forward, Bergkamp became the focal point of Arsenal’s attack, dropping into the zone between the opposition's defence and midfield, and opening up space with his speed of thought and precision of execution.

Wenger’s first full season at the Highbury helm saw Bergkamp enjoy what would be his most productive campaign in North London, as he scored 22 goals in 40 games to help the Gunners win a domestic league and cup double

And as Wenger reinvented his side into what would become the “Invincibles”of the unbeaten 2003/04 season, Bergkamp became the elder statesman, surrounded by a cast of fast, young players such as Thierry Henry, Freddie Ljungberg and Robert Pires. His role was to conduct the play, utilising the pace around him and unlocking defences with his creativity.

The only downside to being reliant on Bergkamp’s wonderful abilities, was that his aversion to flying meant that European away fixtures would either see the Dutchman undertake a gruelling journey by sea, road and rail, or not take part at all.

Bergkamp retired in 2006 having won three league titles with Arsenal and scoring 120 goals in the famous red and white shirt. Though his body slowed, his mind remained a step ahead of everyone else, and even though his input was reduced in his final few seasons, his influence was undiminished.

Bergkamp exists within a select group of footballers whose importance cannot be quantified simply by how many goals they scored, or assists they provided.

Much like early Premier League icons Eric Cantona and Gianfranco Zola, Bergkamp was a master of the sublime; his ability to appear one step ahead of his rivals, while always remaining unhurried, is what separates the good players from the great. And anyone who saw Dennis Bergkamp in his prime will attest to his greatness.