For Celtic fans, the summer of 2017 was dominated by one striker. Moussa Dembélé’s future at the club was the hot topic of conversation but over recent weeks it's been their other striker, Leigh Griffiths, who has stolen all of the headlines.

The Scottish international is up against his former club Hibernian this weekend, and will be hoping to make it three goals in three games as he continues to make the most of his extended run in the first-team.

At the start of the summer, Marseille, Everton, and Spurs were all said to be eager to sign the former Fulham forward, and eye-watering fees were being mentioned.

However, the Frenchman broke down with a hamstring injury in July after facing Linfield in the Champions League qualifiers and was ruled out for the opening month of the season.

Clubs weren’t prepared to part with £40million for an injured player meaning Dembélé would continue to be plying his trade at Parkhead.

It put Brendan Rodgers and the club in a strange situation. They had managed to keep hold of their prized asset but they were now without him for key matches going into the new season and they didn’t have the money to bring in a player of similar quality to cover for him.

The Celtic boss spoke about the team having to adapt without the prolific Frenchman: “Moussa may well be out for the whole of the campaign, the whole European campaign. We're going to have to adapt, we're hoping Leigh (Griffiths) can come back. We have always been a collective, we're looking for that collective to find solutions for us.”

And adapt they did, with Griffiths an integral part of the Celtic team so far this season.

The 27-year-old, who finished the 2016/17 campaign with 18 strikes in all competitions, has seven goals to his name already and has been involved in a goal every 73 minutes. He’s netted important goals in wins over Rangers and Anderlecht.

To put it bluntly, he’s been the reason the Bhoys haven’t missed Dembele.

Griffiths has always had the ability but there are sometimes question marks over his application as well as his off-field antics. Something the world got a glimpse of during the recent Glasgow derby. He was caught on camera wiping something on the Rangers corner flag, much to the delight of the away fans.

However, on the pitch he seems to have bought into Rodgers' tactics and he's relishing his extended run as the man to lead the line in all of the big games. What's more, the Celtic supporting cast seem to have formed an understanding with him and the team look frightfully in sync.

The former Wolverhampton Wanderers forward knows where the back of the net is. In spells with Livingston, Dundee and Hibernian he was averaging a goal every game.

Since moving to Celtic he's been involved in 133 goals in 158 appearances, including 40 strikes in all competitions during the 2015/16 season. He could well surpass that total during this campaign if he continues to get the minutes. His intelligent movement means he's going to get chances every single game, and this is what catches the eye when you watch him. 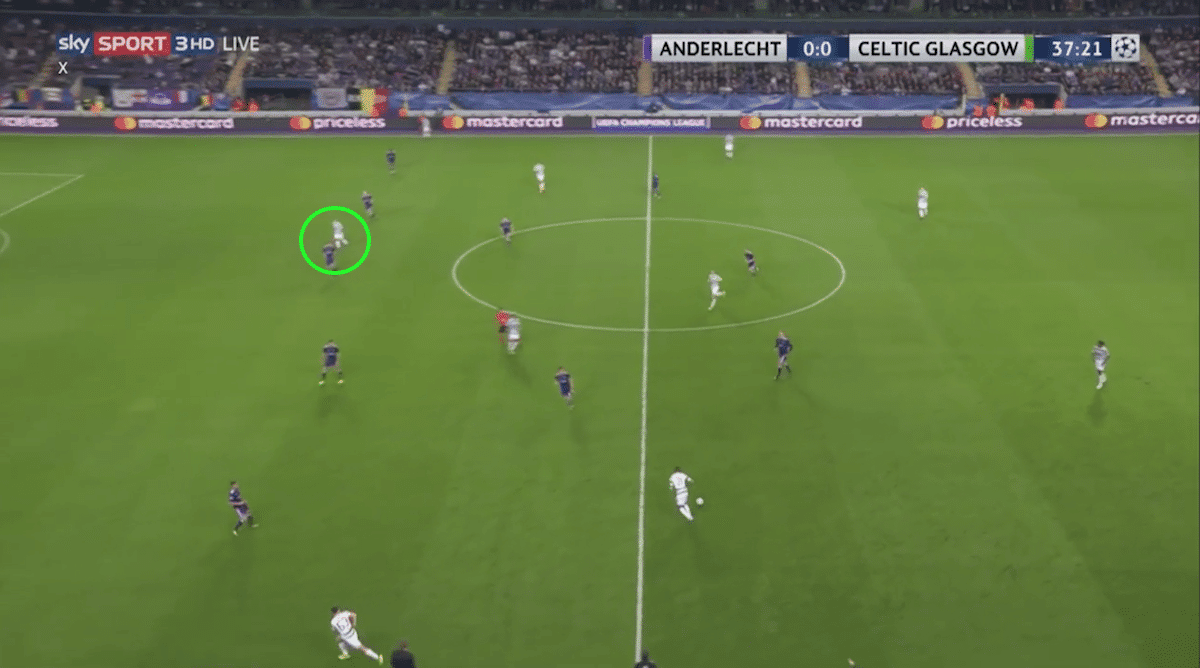 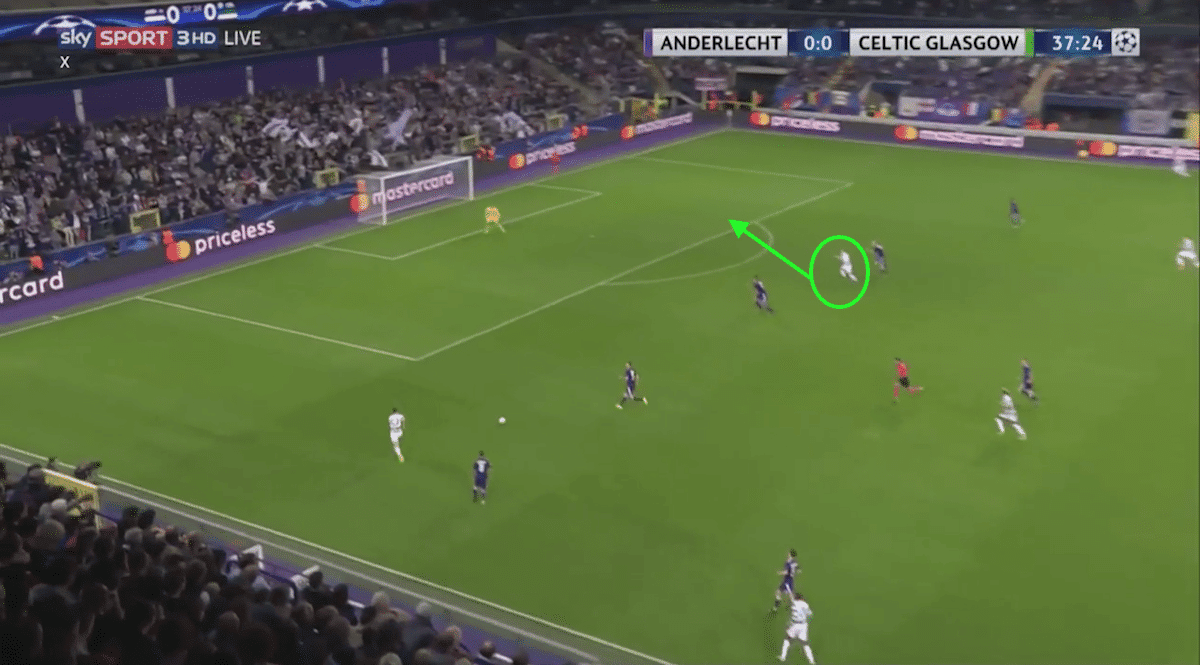 The opener in Brussels was simplicity at it's finest. The Bhoys retained the ball while working Anderlecht into areas they didn't want to be in. You see Griffiths circled in the first picture just occupying two of the centre-backs.

As soon as Olivier Ntcham plays and incisive ball between right wing-back and right centre-back Griffiths is on the move. Most strikers dart to the near post, and sometimes that's what you want, but with Anderlecht playing with three centre-backs it's easier to have shots blocked if players all crowd to the near post.

Griffiths darts across the face of the left sided centre-back to stretch the back three. He trusts Kieran Tierney to put in a dangerous ball and by moving to the back post there's more chance the cross is converted, whether it's by him or by one of the defenders. 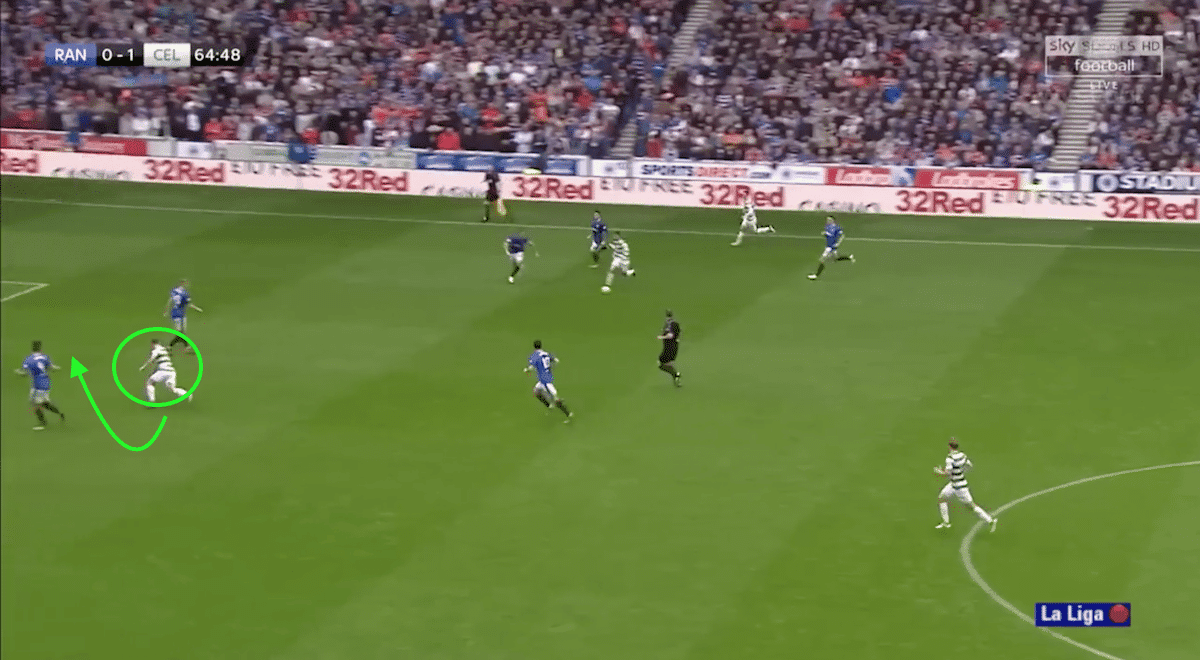 A lot was made of the finish against Rangers as well as Roberts' pass. But what went under the radar a little was Griffiths movement beforehand.

When the Manchester City loanee picks the ball up in a wide area Griffiths drops deeper and drags the Rangers centre-back with him so there's a disjointed defensive live. As soon as the winger cuts inside Griffiths arcs his run and Roberts is able to slide the ball into the space.

The Celtic No.9 latches on to the pass and fires home with his weaker foot. Everything about the goal looks simple but it's because such movements have been rehearsed. So much so it feels synchronised.

Rogders might be tempted to start Dembélé and give Griffiths a well deserved rest following on from his impressive performances, but resting a striker in such fine form with momentum on his side would be a mistake.

Use our Predicted Line-ups feature to pick and share the side you would pick if you were Rodgers.

Our unique algorithm has predicted the XI it believes is most likely to start, but you can also give it a go yourself.

Just click “create your own” and pick the players you would choose, and you can also see their stats per 90 minutes once you’ve picked them.

When you’re happy with your team, press “confirm” and you’ll be able to share your team with friends via social media.