Simple in its execution, Ousmane Dembélé’s finish, low in the corner beyond the outstretched hand of England goalkeeper Tom Heaton, not only symbolised the beginning of a new era in the France national team, but could be a window into the future of European football.

Although far from over the hill, Cristiano Ronaldo and Lionel Messi won’t last forever. Just like Pele, Diego Maradona, Johan Cruyff and Ronaldo before them, eventually they’ll have to give way to the new breed.

Dortmund’s 20-year-old winger, paired with PSG transfer target Kylian Mbappé, who is valued at more than €135million, could be the duo to take over their mantle.

That goal, in France's friendly win over England in June, was just a small example of what they are capable of.

Down to ten men, it was Everton transfer target Olivier Giroud who made way for Laurent Koscielny following the dismissal of Raphaël Varane. Mbappé was left to run the line and he didn’t disappoint.

A sloppy pass from England gives Les Bleus possession. Quickly it’s fed into Paul Pogba, forcing Eric Dier to step and and close down the ball. 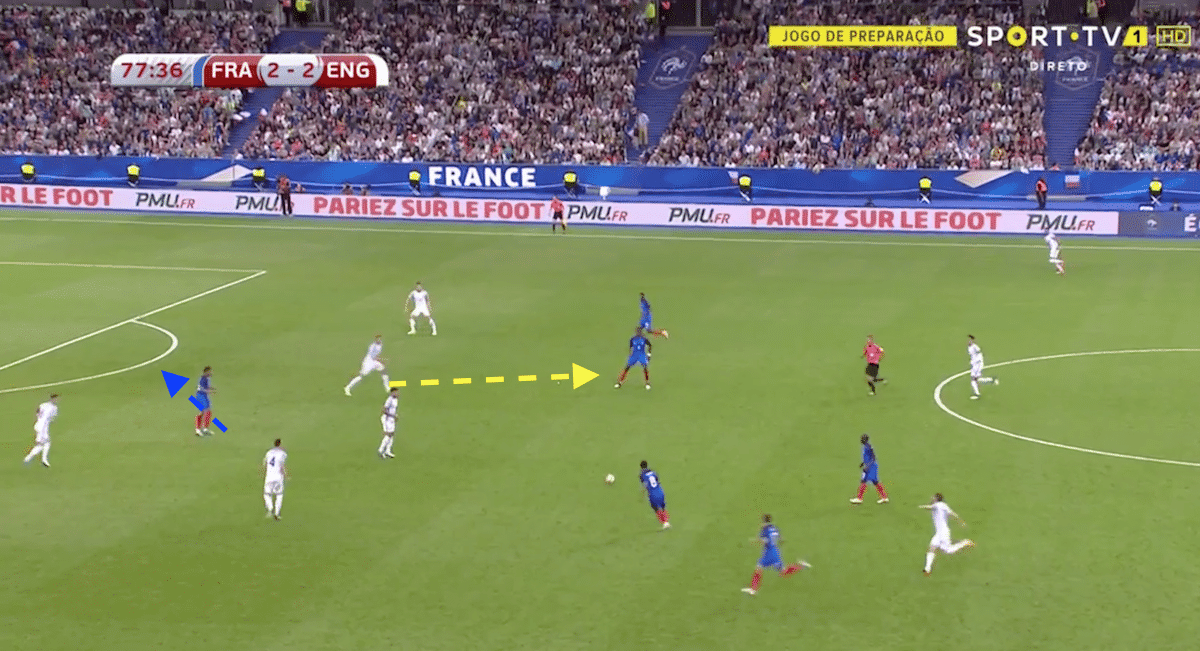 As you can see from the image above, this allows Mbappé to move into the space and remain unmarked. Manchester United‘s £89million signing finds the teenager and two England players are forced to close him down. 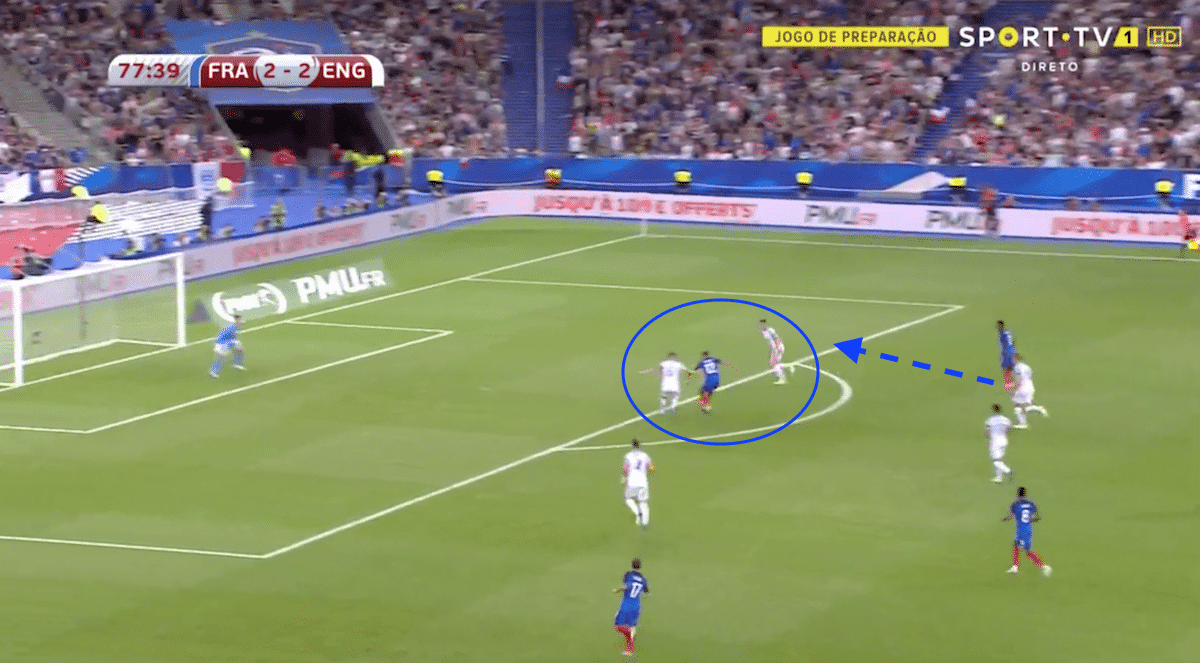 The Real Madrid transfer target sees the run of Dembélé and his low shot finds the bottom corner. 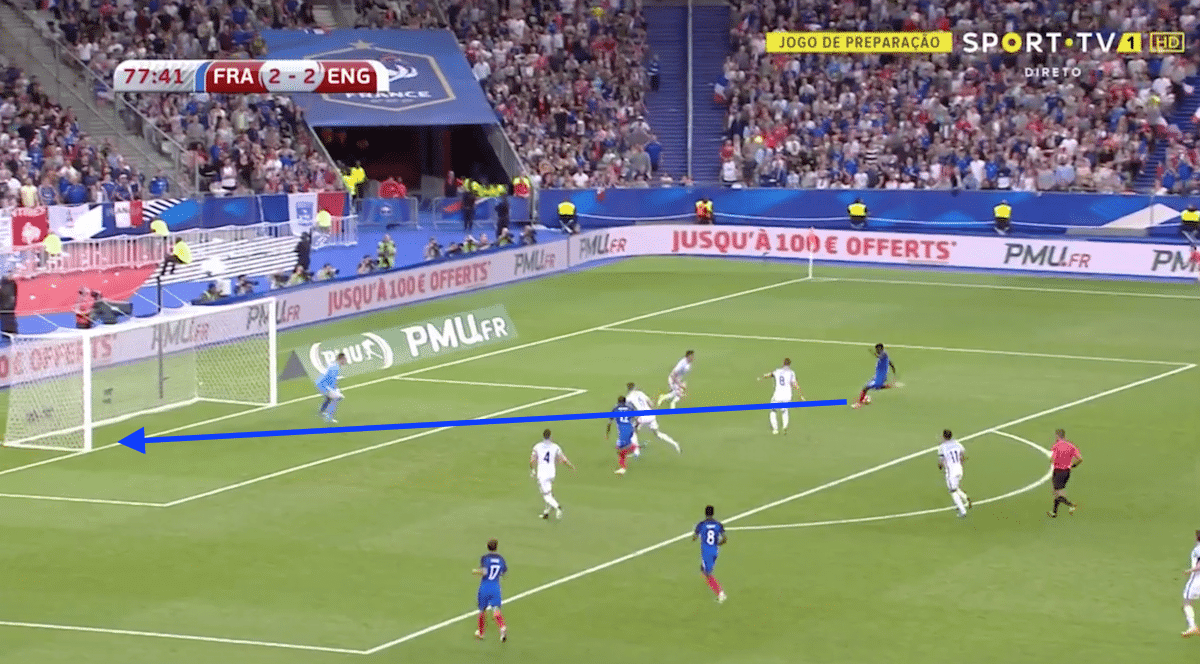 In 49 games (3,387 minutes) in all competitions, the former Rennes attacker scored ten goals and added 21 assists. Down in the Cote d’Azur, as Monaco went on to stun Paris Saint-Germain and lift the Ligue 1 title, the 18-year-old pitched in with 26 goals and 14 assists in 44 games (2,633 minutes).

With room to improve, how long before they match the return of Ronaldo and Messi? – 127 goals in 8,578 combined playing minutes (67.5 minutes per goal).

Incredibly, in the next few seasons, we could see the French duo do battle in El Clasico, just as the world’s two best players have done since 2009. 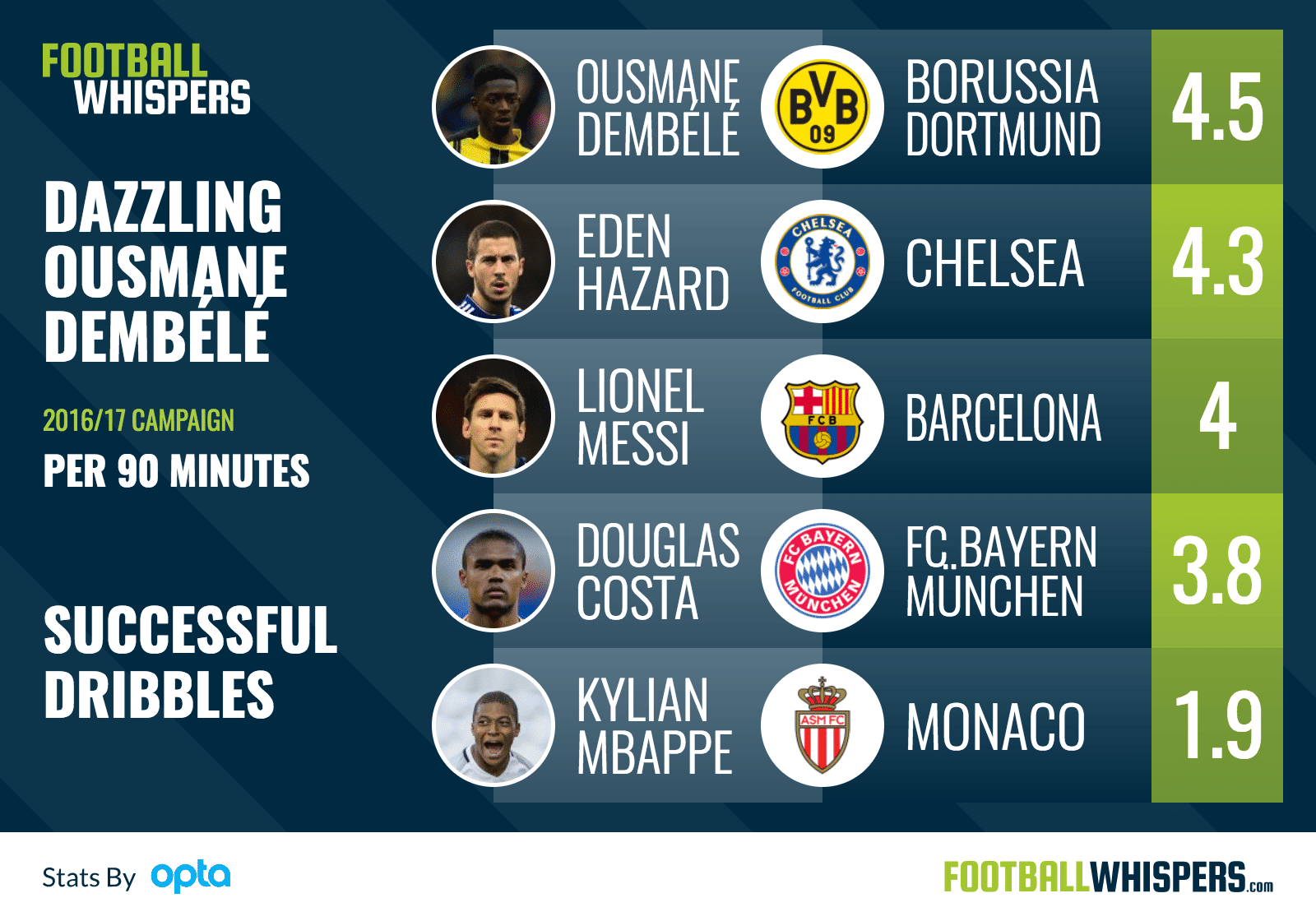 “It would be a dream to play for Barcelona,” Dembélé told beIn Sports in March. “The Spanish league is really competitive. I like the German league, too, it’s really attacking.

“I’m inspired by Neymar and Messi. They’re great players. I try to follow their games and copy what they do in training.”

The little Argentine maestro almost hand-picked the 20-year-old himself, telling Spanish outlet Diario Gol that he would like the French forward at the Nou Camp one day.

When Dembélé broke through at Breton club Rennes the season before last, he showed the versatility to play on either wing or through the middle. There was no hiding the youngster’s confidence in his own ability.

Before he had even made his first team debut, he launched his own website – it was quickly removed. Clearly someone had a quiet word.

No-one in the Douglas Costa of Bayern Munich at 3.8 came anywhere close.

Impressively, the Frenchman bettered Messi for attempts and successful dribbles. Mostly playing on the left, his ability with either foot makes him a danger off both flanks; cutting inside or beating defenders to the by-line.

Dembélé was involved in eight goals before BVB were eliminated from the Champions League by Mbappé's Monaco.

The Rise of Kylian Mbappé 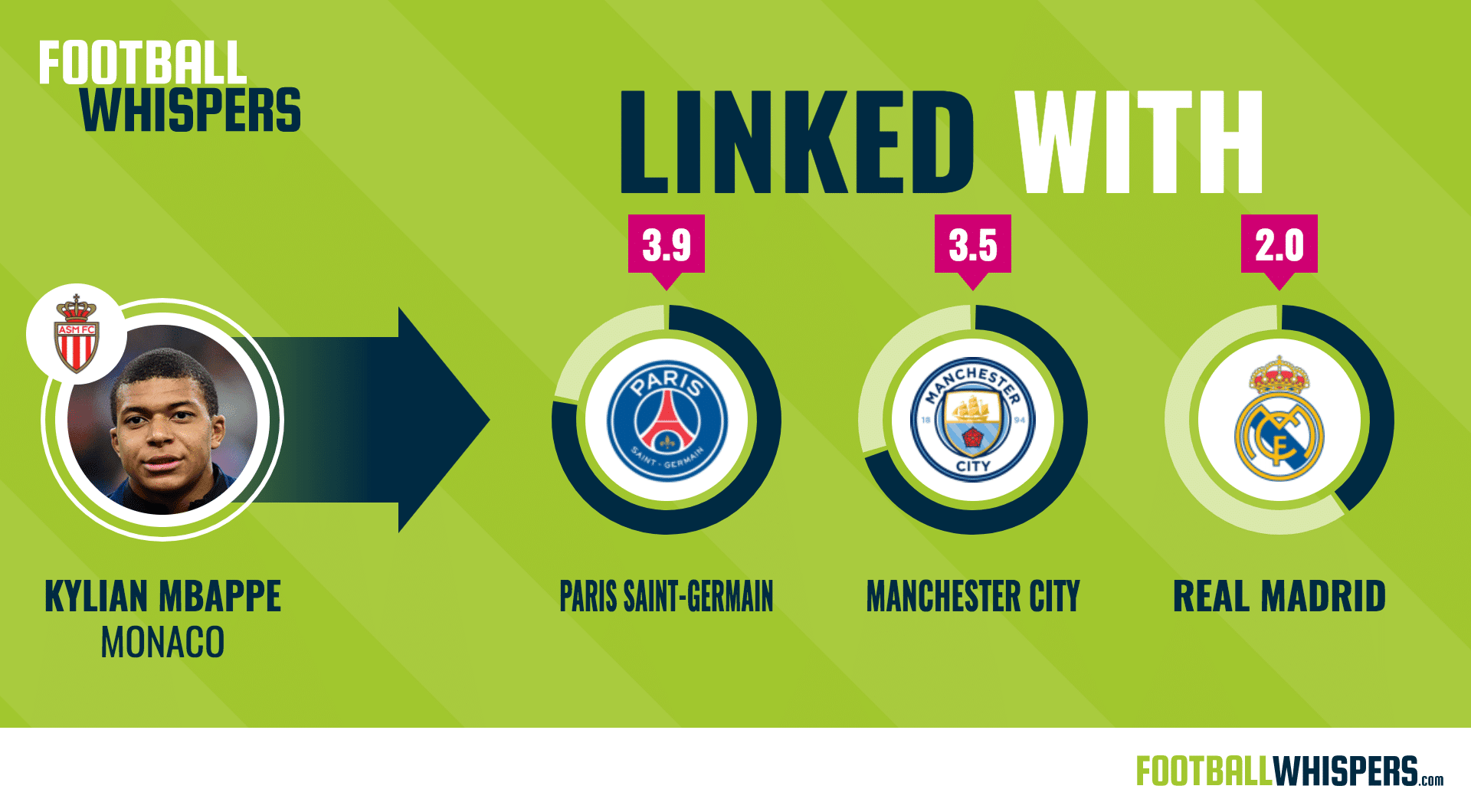 Dembélé could only watch on as Europe’s hottest prospect scored three times over the two legs as Les Monégasques won 6-3 on aggregate.

Last season was Mbappé’s breakout year and he was involved in a goal every 65.82 minutes. No-one in Europe can match that return. He’ll be expected to find consistency at this level in order to be considered in the same level as Europe’s elite, it has been an incredible journey so far.

After winning the Under-21 European Championships with France in 2015, there was a level of excitement surrounding the player’s chances. But no-one expected this.

As rumours of interest from the big clubs started to surface, pictures began to emerge with 14-year-old Mbappé’s bedroom covered in posters of Ronaldo and his style is reminiscent of the Portuguese.

Starting as a winger, he has shown great footwork, blistering pace and high self-belief.

Now, with a full campaign under his belt, you can see his style begin to show the shape of a deadly centre-forward. Just like Ronaldo has done as he has grown older.

Mbappé can play off the shoulder of the last defender and burst beyond any back line. He has the skill to drift left and cut inside to finish with his excellent right foot and, with each game that passes, he shows another side to his all-round excellence.

Able to score with both feet, and with his head, he looks the full package. His movement and well-timed runs into the box are as good as players who boast hundreds of games under their belt.

With his Mum still driving him to training at La Turbie, it’s easy for him to stay grounded despite the attention.

“I may be ahead of my age, but in real life I am still a kid,” he told BeIN Sport. “Footballer does not rhyme with Ferrari, I have no car, it's not a big deal.”

Mature beyond his years, you can see a natural progression and a similarity between Ronaldo’s game and Mbappé’s skillset.