If reports are to believed, Ousmane Dembélé‘s nightmarish spell at Barcelona could soon be coming to an end. The French flyer forced through a move to the Camp Nou in August 2017 after he went on strike.

Borussia Dortmund managed to negotiate a deal worth £95million, with add-ons to be paid at a later date, which saw the former Rennes winger become the second-most expensive player ever.

He was chosen as the successor to Neymar and even claimed the No.11 shirt.

The youngster made his debut in the September and grabbed an assist in the derby 5-0 derby win over Espanyol. It was the perfect start and a way to show the world the price tag wasn't weighing heavily around his neck.

However, just over a week later he injured his hamstring during his first start for Barça. It ruled him out for four months. By the time he returned the La Liga side had struck a deal to sign Philippe Coutinho. The Brazilian arrived in Spain taking Dembélé's place in the team as well as his tag, at the time, of the second-most expensive player in the world.

Injury befell the 21-year-old again: he was ruled out for a month, forcing him to miss seven matches, after picking up a knock against Real Sociedad. To give up on such a prodigious talent after an injury-riddled season would be premature.

But Catalan radio station RAC1 claim that's exactly what is happening, sort of, and that the transfer gurus at the Camp Nou are contacting clubs across Europe to find a home for the fleet-footed winger. The report comes just weeks after Mohamed Bouhafi Liverpool wanted Dembélé on loan with an option to buy.

With Antoine Griezmann at the top of Barcelona's wish list this summer, a move to get Dembélé first-team football would make sense. Furthermore, the Reds wanted to sign the Frenchman, with Jürgen Klopp meeting him in person, before he opted to join Dortmund, so there's definitely interest there.

But would the Champions League finalists be interested in going in for him again? On paper, he's the ideal fourth attacker, which is something Liverpool have been without since losing Coutinho – the player capable of filling in for both Sadio Mané and Mohamed Salah.

How Dembélé compares to the Liverpool attackers 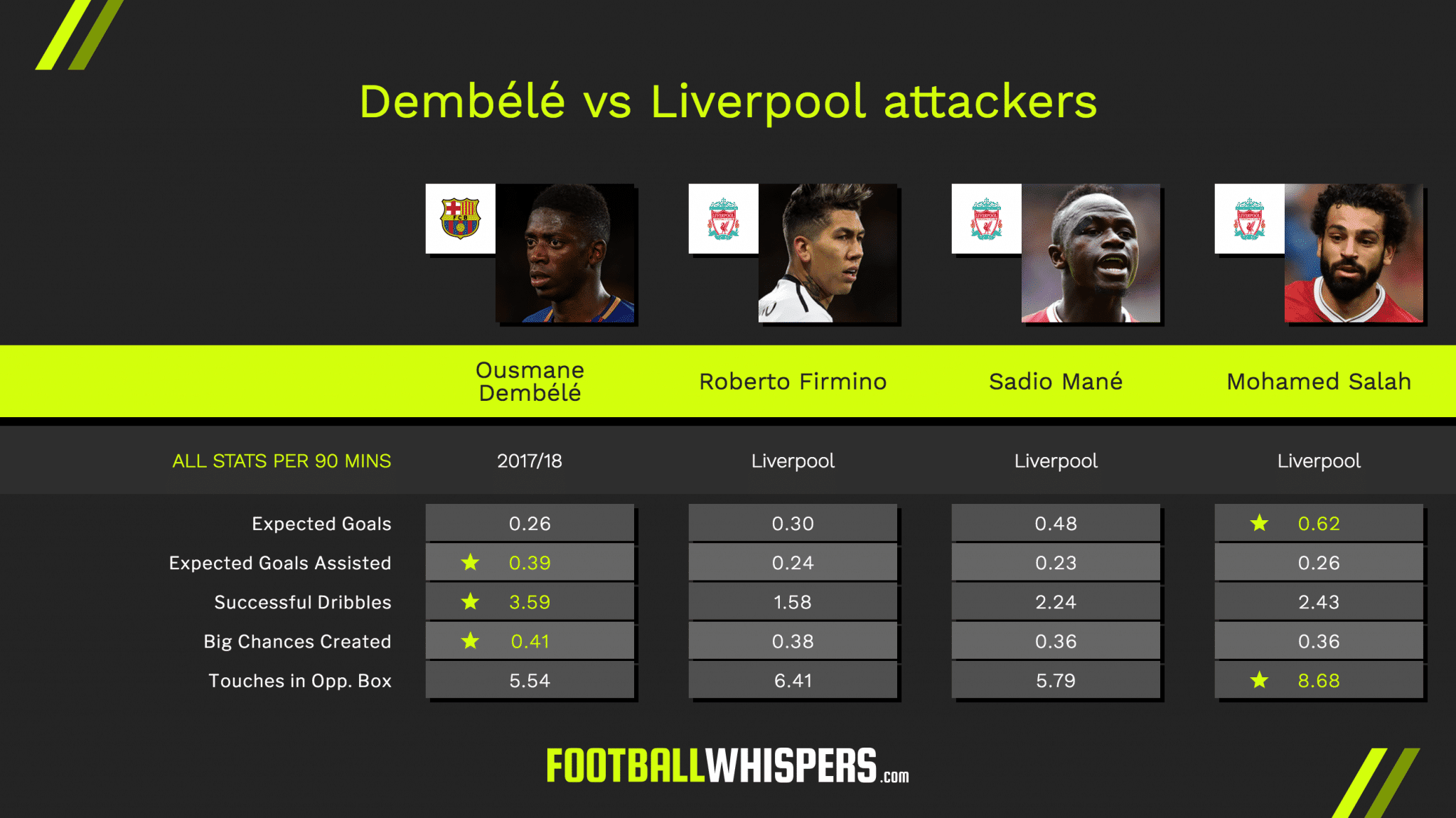 Though his sample size is a lot smaller than the Liverpool trio, Dembélé stands up well to the test. His xG90 (expected goals per 90 minutes) is just shy of Roberto Firmino's score of 0.3. He beats Firmino, Mané and Salah in terms of xA90 (expected goals assisted per 90) as well as creating the most big chances.

Salah gets closest to him when it comes to dribbles but the Egyptian king is still over one shy of the young pretender on a per-90-minute basis. He gets into the penalty area with great regularity and has a similar amount of touches in the opposition's box as the Liverpool No.19.

There's nothing in those attacking stats which suggest he would stick out like a sore thumb in the free-flowing, rampant Liverpool forward line. Despite only managing 877 minutes for Barcelona in La Liga this term, he's developed as a player. He's much less of an individual now, as shown in the persona radar below. 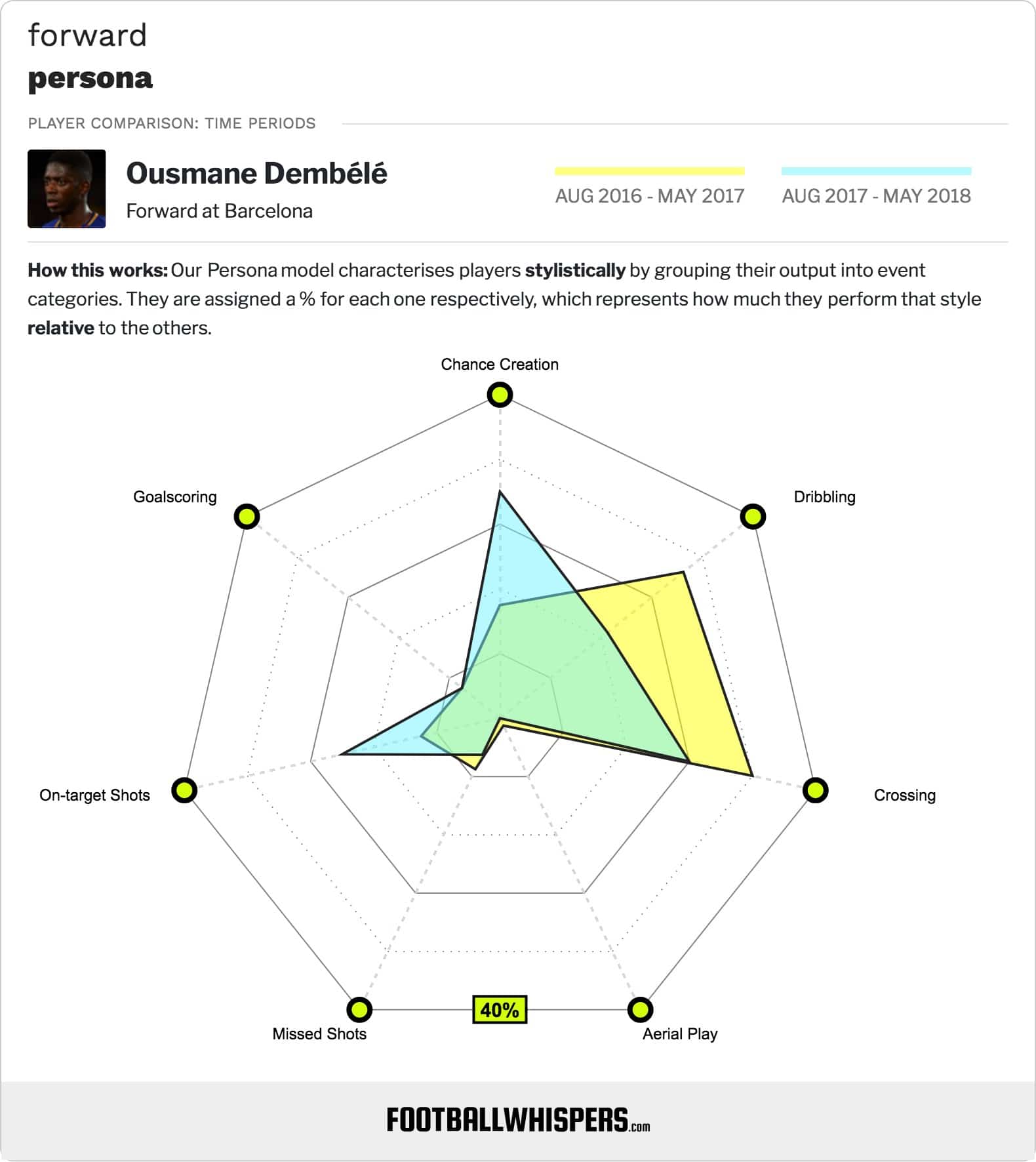 He's attempting fewer dribbles and crosses this season, meaning there's more of a purpose to his game when in possession. He's now completing 82.4 per cent of his passes as opposed to the 37 per cent he managed at the Westfalenstadion. His dribbles per 90 total while playing in the Bundesliga was 4.54 and it's now dropped to 3.59.

Dembélé had more shots with Dortmund but he's getting more of his attempts on target for Barcelona – his shot accuracy is now 50 per cent up from 34 per cent. It's why his xG90 this season is 0.05 better than it was during the 2016/17 campaign and his xA90 is the highest it's been in his entire career.

The Dembélé at Rennes and Dortmund was an exciting project. The one at Barcelona is much more well-rounded and ready to make an impact for Klopp. He could be the final piece in the Liverpool puzzle.